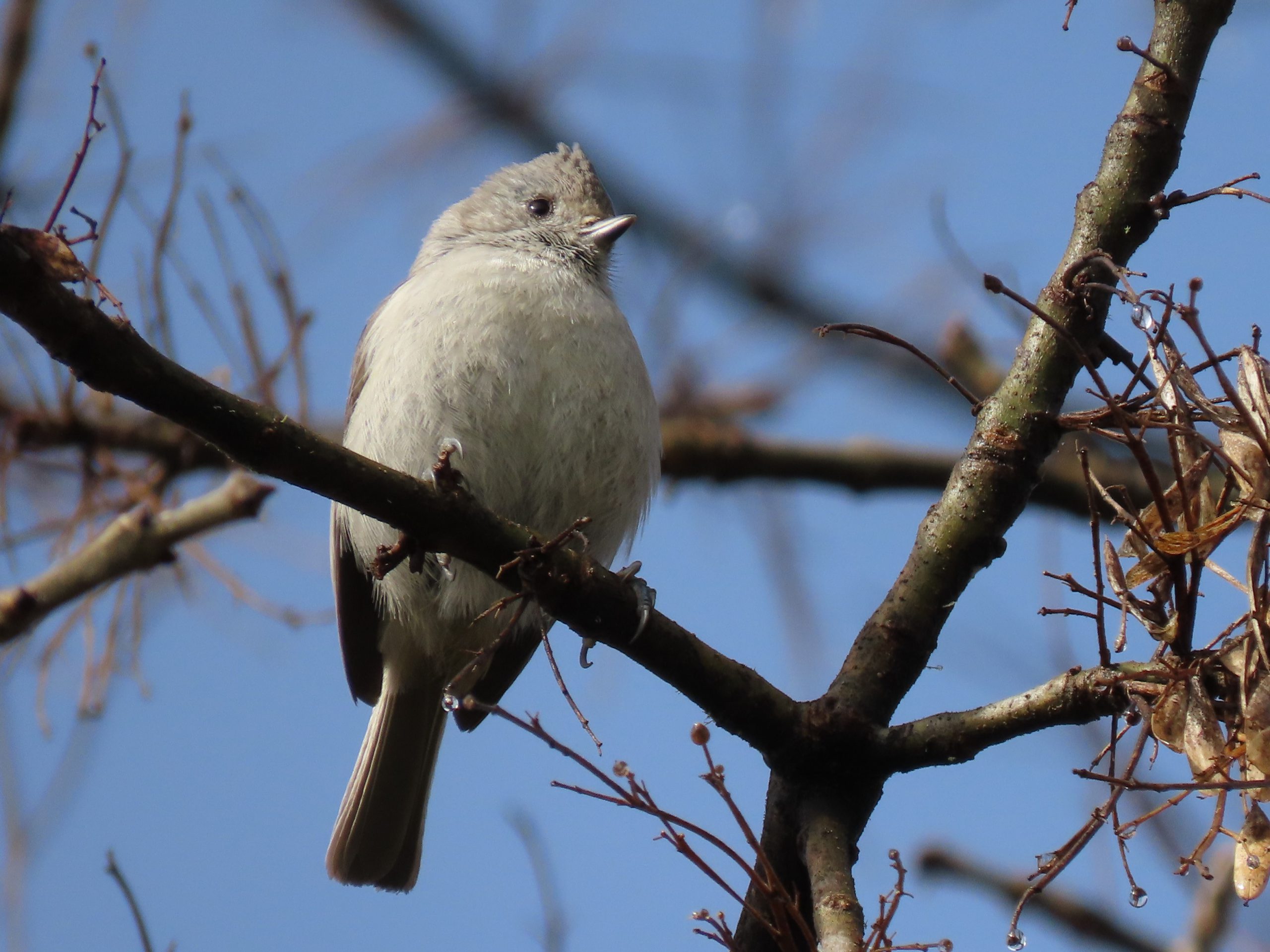 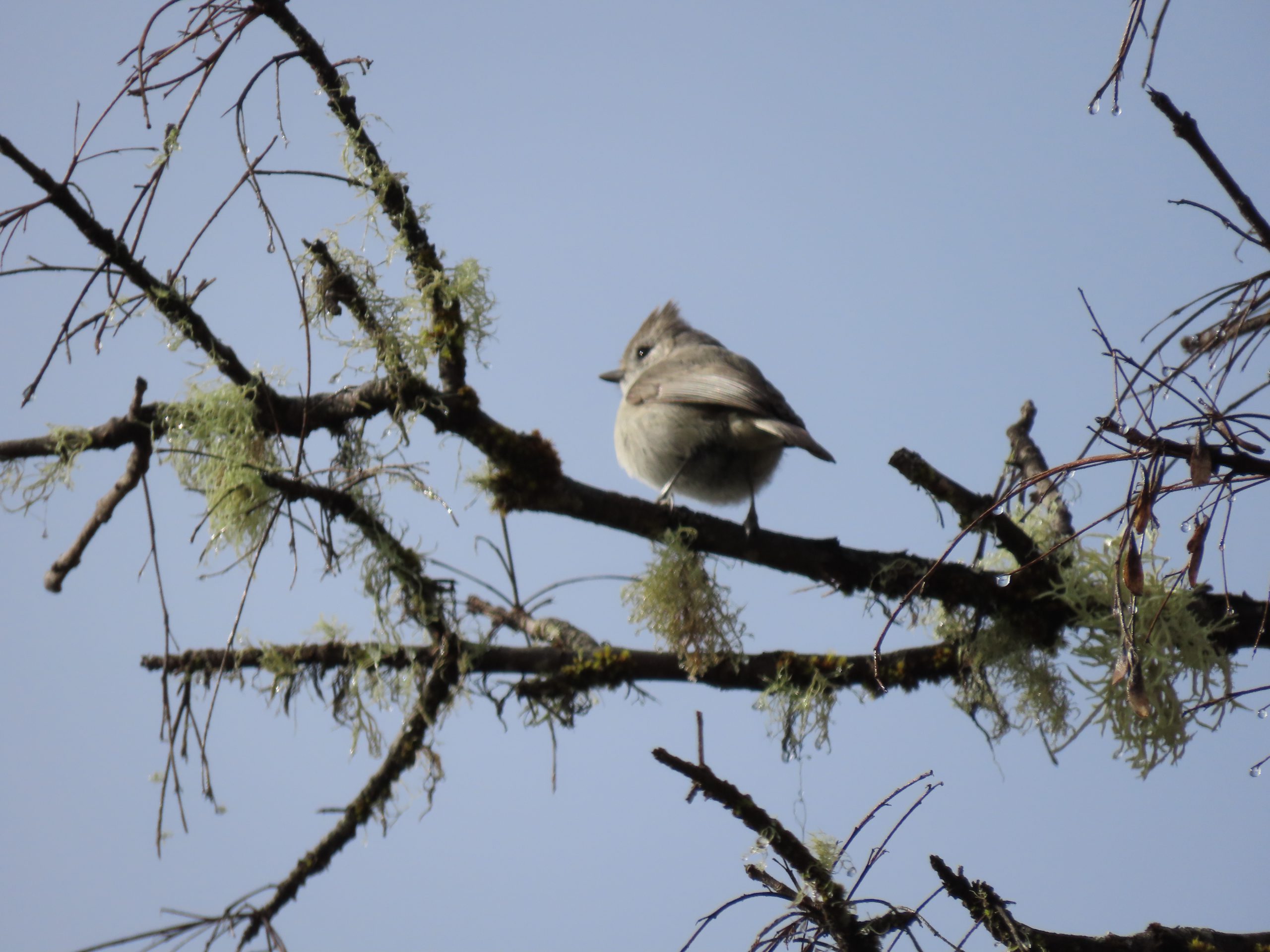 As March is proceeding with its variable weather, and some rain thank goodness, the birds are really beginning to exhibit nesting behavior. I see that many are in pairs now, calling back and forth to each other in the trees and shrubs. Today I am going to talk about a bird which is mostly found in California. It ranges north into Oregon and south to Baja California, but the largest population resides in California where oak woodlands are. These little gray birds seem to be everywhere, and their unusual songs and calls seem to follow me as I walk along the many riparian corridors in this valley. Therefore, I have chosen them for the topic of this blog today. Their cuteness and curious nature are very fun to watch during these strange times!

As I walk along Outlet creek, I hear loud calls consisting of both high and low sharp, robust notes in repeated sequences. These are the vocalizations of the Oak titmouse, Baeolophus inornatus. It is moving through the willows, alders, and cottonwoods growing along and in the creek. Its drab gray-brown color makes it hard to find in this riparian vegetation and in the oak woodlands it prefers. It is a small songbird slightly bigger than a Chestnut-backed chickadee. It has a short, stubby, and stout bill it can use to hammer open acorns or take the head off a large caterpillar. It has a small crest and a medium long tail with a large round black eye that stands out on its soft gray face. The Oak titmouse has a large variety of calls and songs and sometimes seems to use the art of ventriloquism to make it harder to find it. They are very active lively birds when foraging for insects and other small invertebrates, seeds, catkins of willow and oak, fruit, and berries. Watching them hang upside down from twigs or on bark, I see them gleaning whatever they can find in the cracks and crevices like a chickadee.

The song of the Oak titmouse is heard more and more as spring approaches. The males do most of the singing with several song variations and robust notes. A female will rarely sing.

The Oak titmouse is mostly restricted to the dry slopes of California where oak woodlands occur and are also found in adjacent habitats in riparian stream corridors. They are a resident bird here and do not migrate for the winter or for breeding. In her book, Secrets of the Oak Woodlands, Kate Marionchild states that if you see a pair of Oak titmouse in a location, they are probably the “lord or lady of the land on which you stand.” They occupy the same holdings year-round, staying put in the fall when many other birds journey south. “They rarely set foot outside their boundaries, leaving only if forced to by wildfire or habitat loss due to human activities.” Their home range can be as much as six acres and they will defend it against other Oak titmouse intruders.

They are cavity nesters like Western bluebirds, preferring natural cavities such as woodpecker holes but will also readily use nesting boxes. We have put up a few of these nesting boxes on mitigation lands that were built and donated by Dave Bengtson from Peregrine Audubon. He built them with predator guards to keep birds like the California Scrub-jay from being able to access and eat the nestlings. The boxes can be inspected and cleaned out at the end of nesting season. The Oak Titmouse is one of the few songbirds that mate for life with both sexes helping to raise the young.

According to Cornell’s “All About Birds” website, even though the titmouse is one of the most common birds in the oak woodlands of California their population has decreased by two percent per year between 1966 and 2014, resulting in a cumulative decline of fifty seven percent. It was put on the 2014 State of Birds Watch List. Its decline is linked to human population increases in California and habitat destruction. The Oak titmouse has a narrow range of habitat compared to other more flexible nesters such as the Bushtit or the Chickadee which means that losing oak woodlands has a serious impact on its survival.

The songs of this bird follow me as I walk on, filling the air with the joy of spring. A little further ahead I see another titmouse and know it must be its mate getting ready to build a nest in one of the cavities in the oaks above me. I will keep an eye open to see if I can find where this is and get some photos of the parents going in and out.