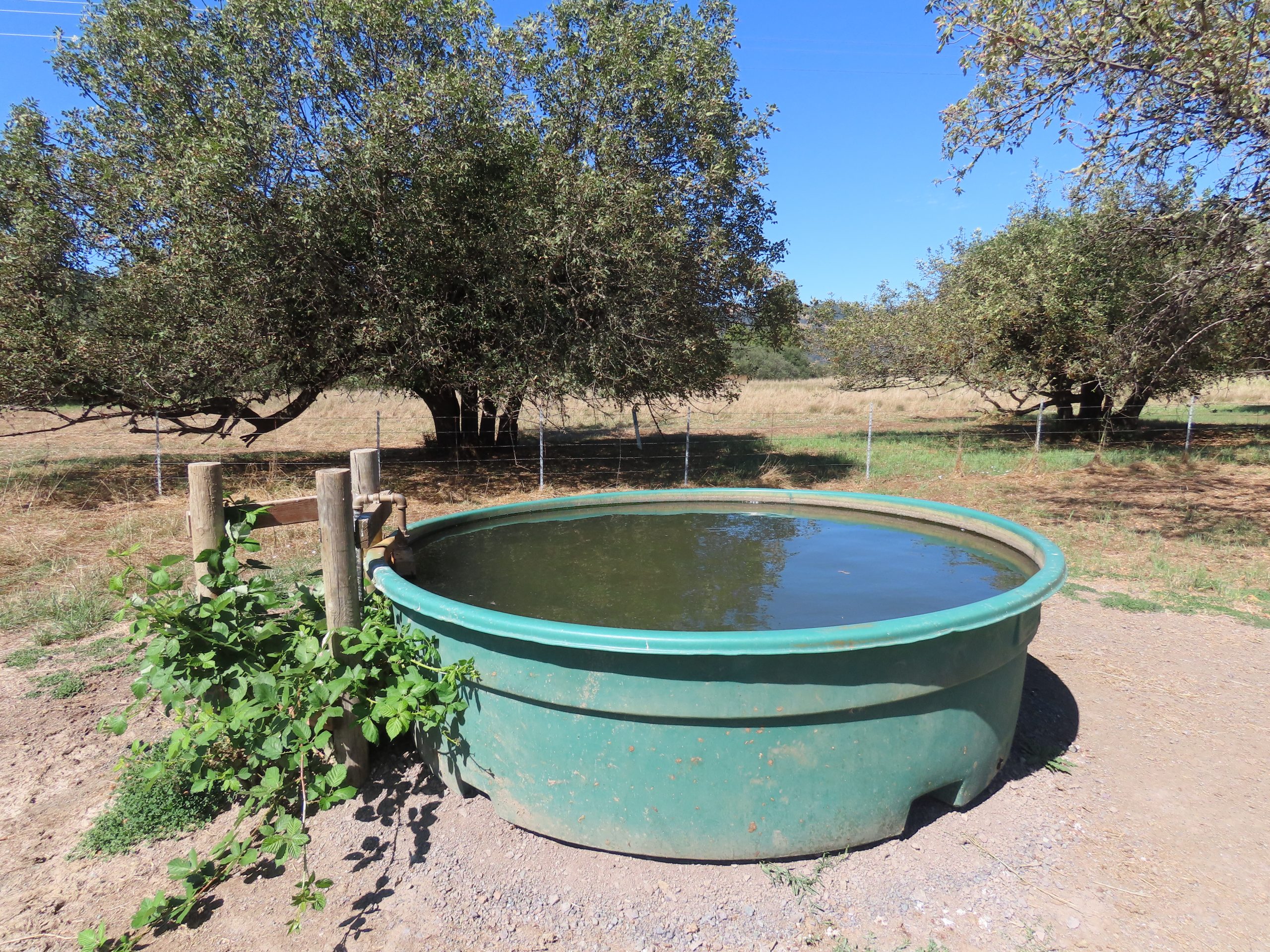 One of the water troughs before we made the modifications for stability and protection against floating away during inundation. 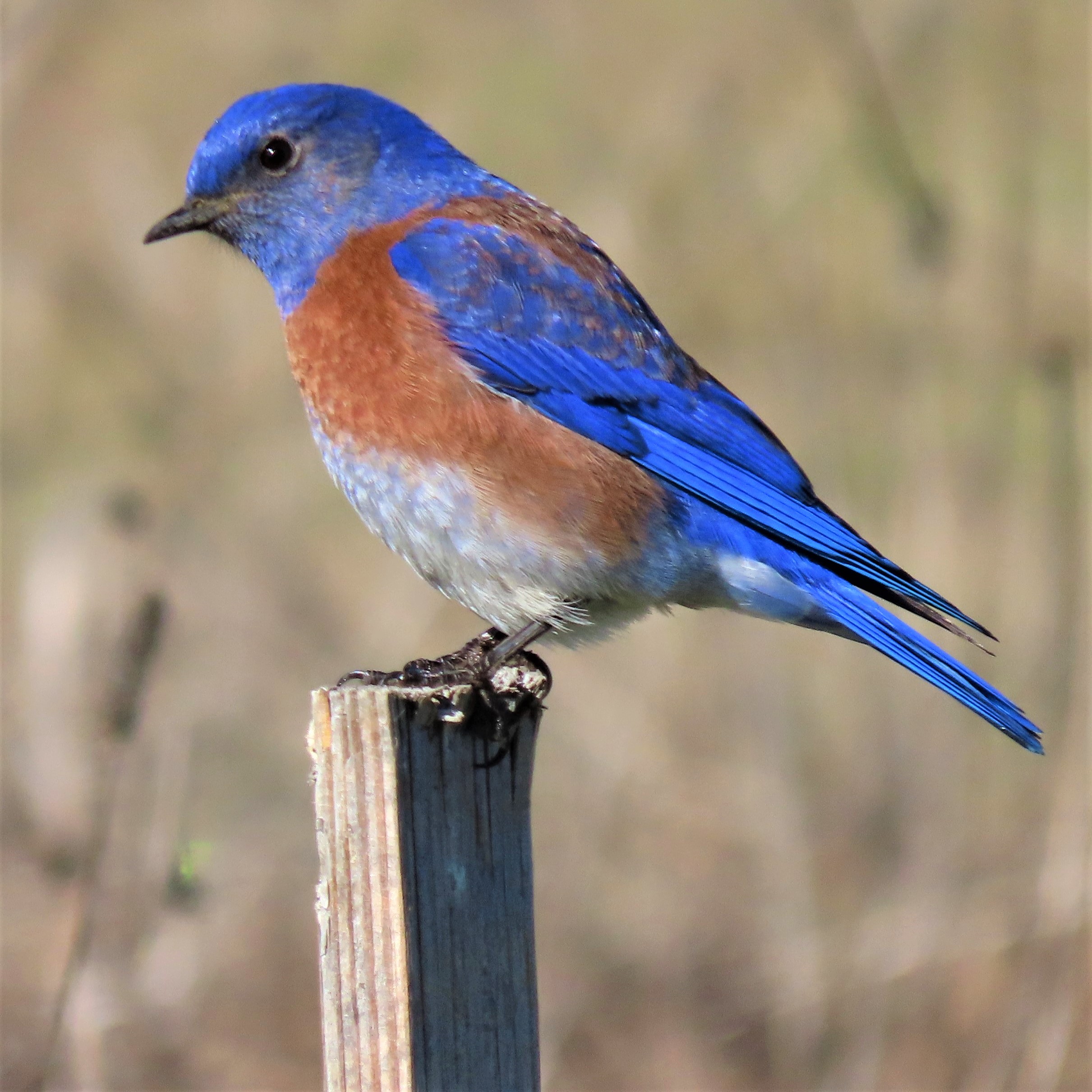 A Western Bluebird, one of the many species of birds that use our troughs for water and perching in the summer months. 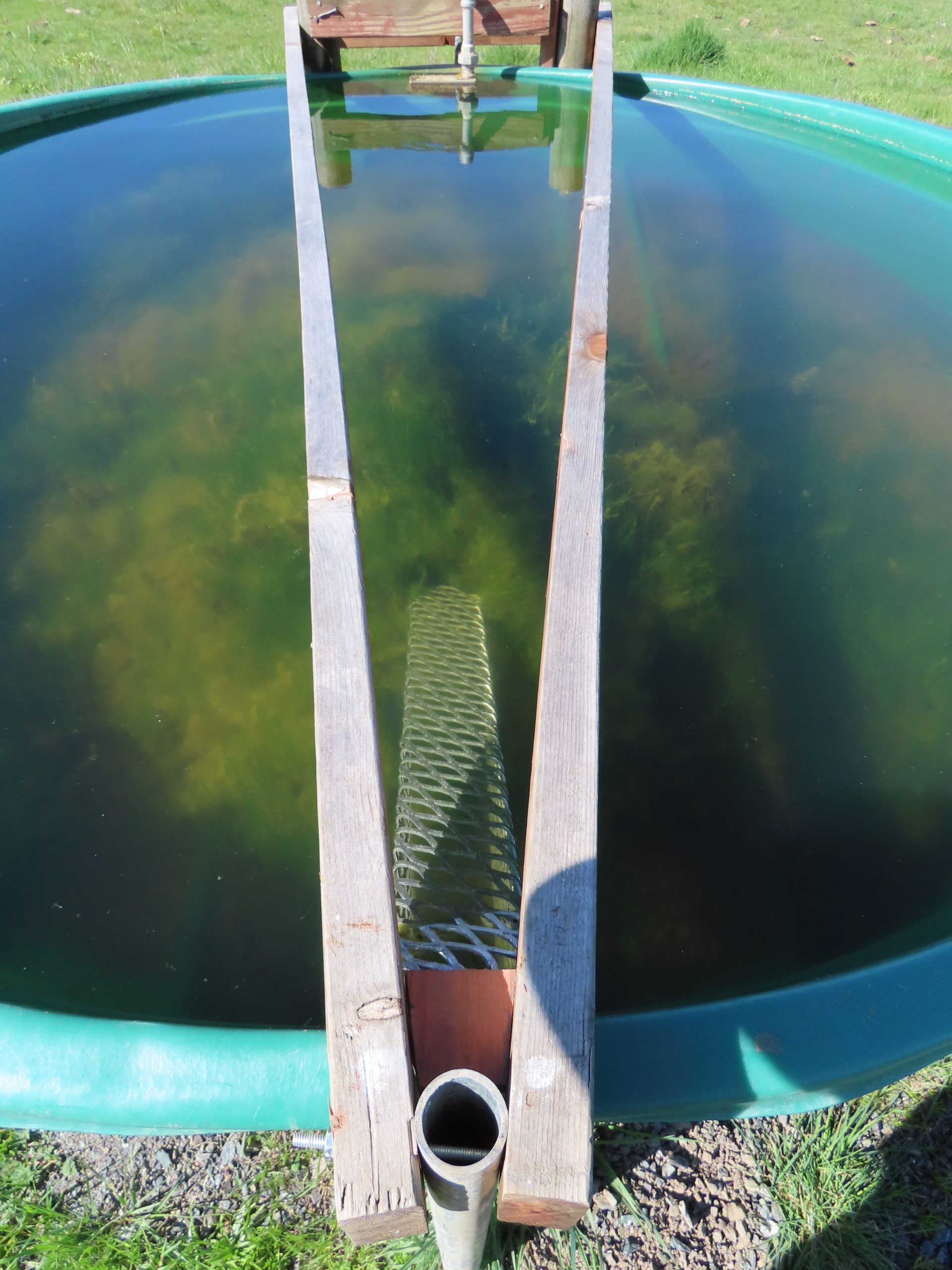 A top-down view of the escape ramp installed in one of our troughs with a view of the attachment to the tank. This design allows animals to easily walk out of the tank onto that piece of redwood and to the top ot the tank. 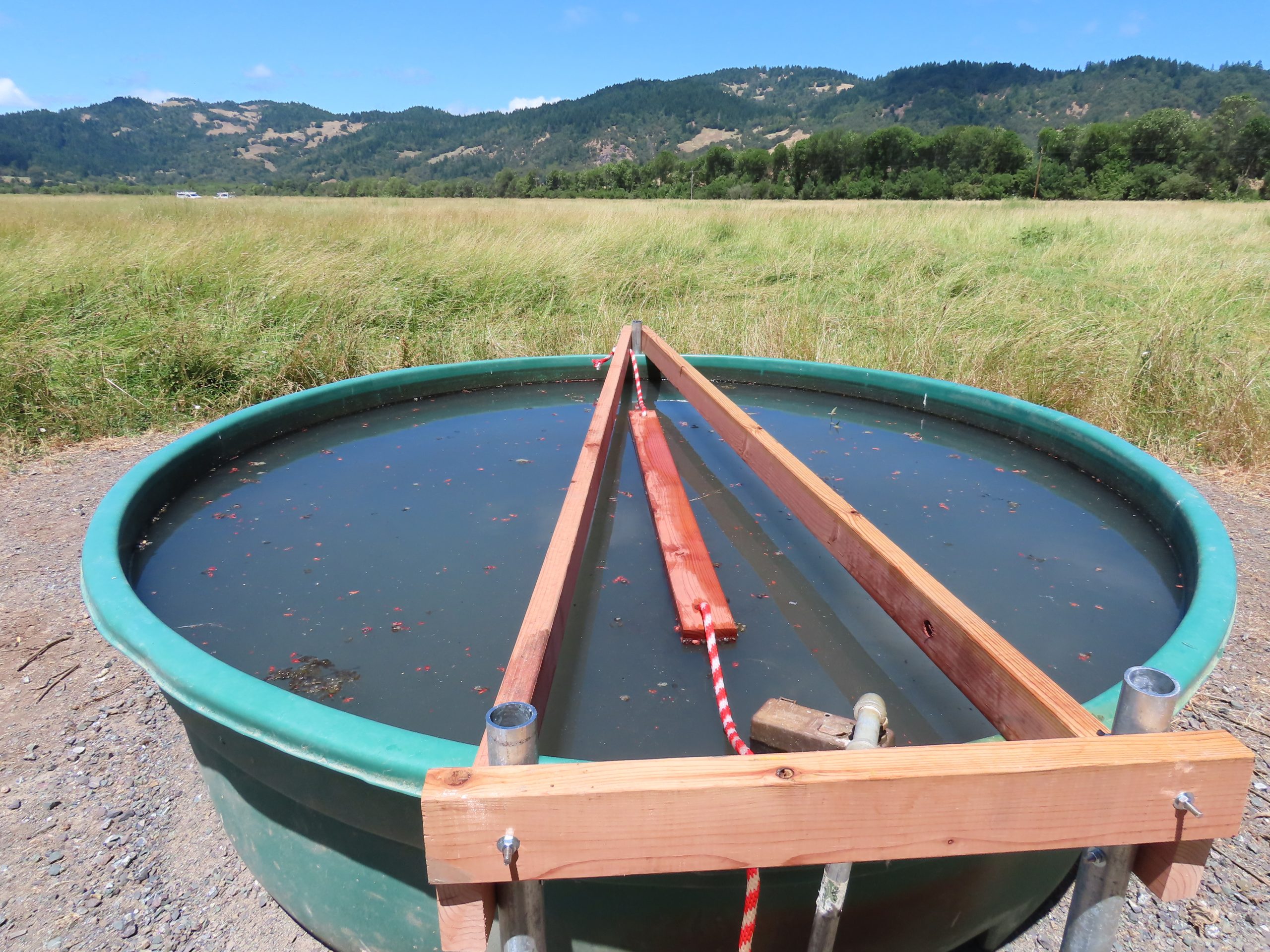 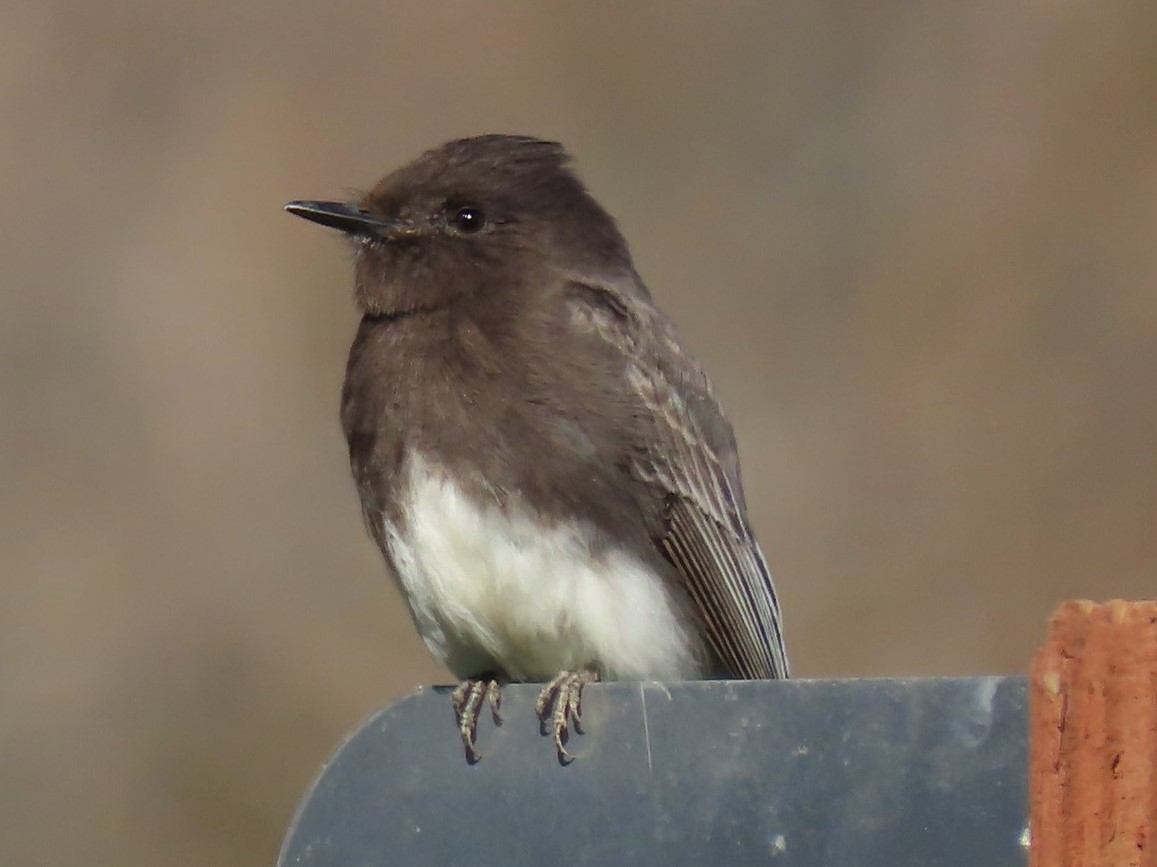 This is a Black Phoebe a resident bird that I often see perched on the water troughs. 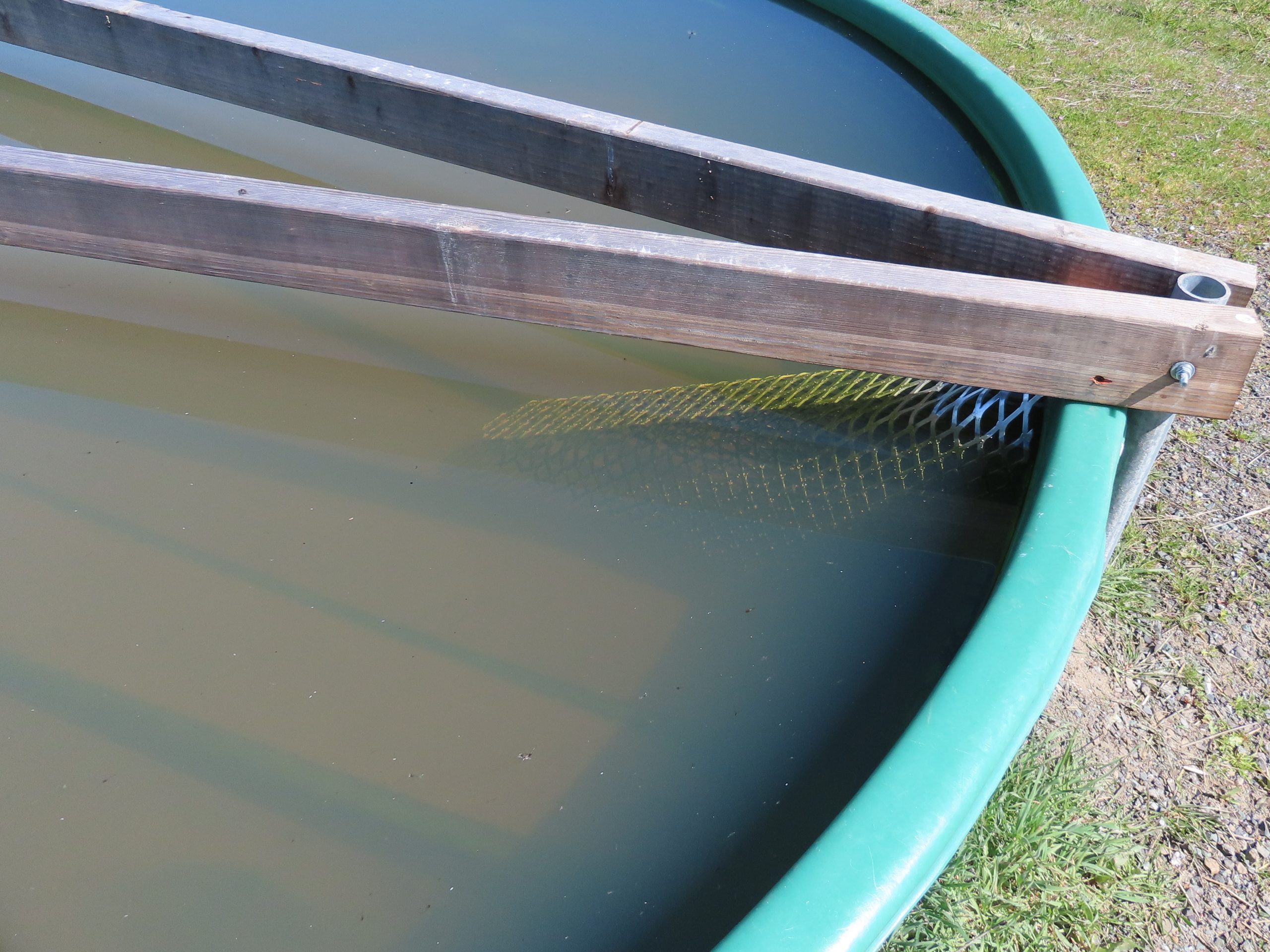 Looking to the side of the escape ramp. This wire angled cage goes to the bottom of the tank along the side allowing creatures who end up at the bottom to crawl up. 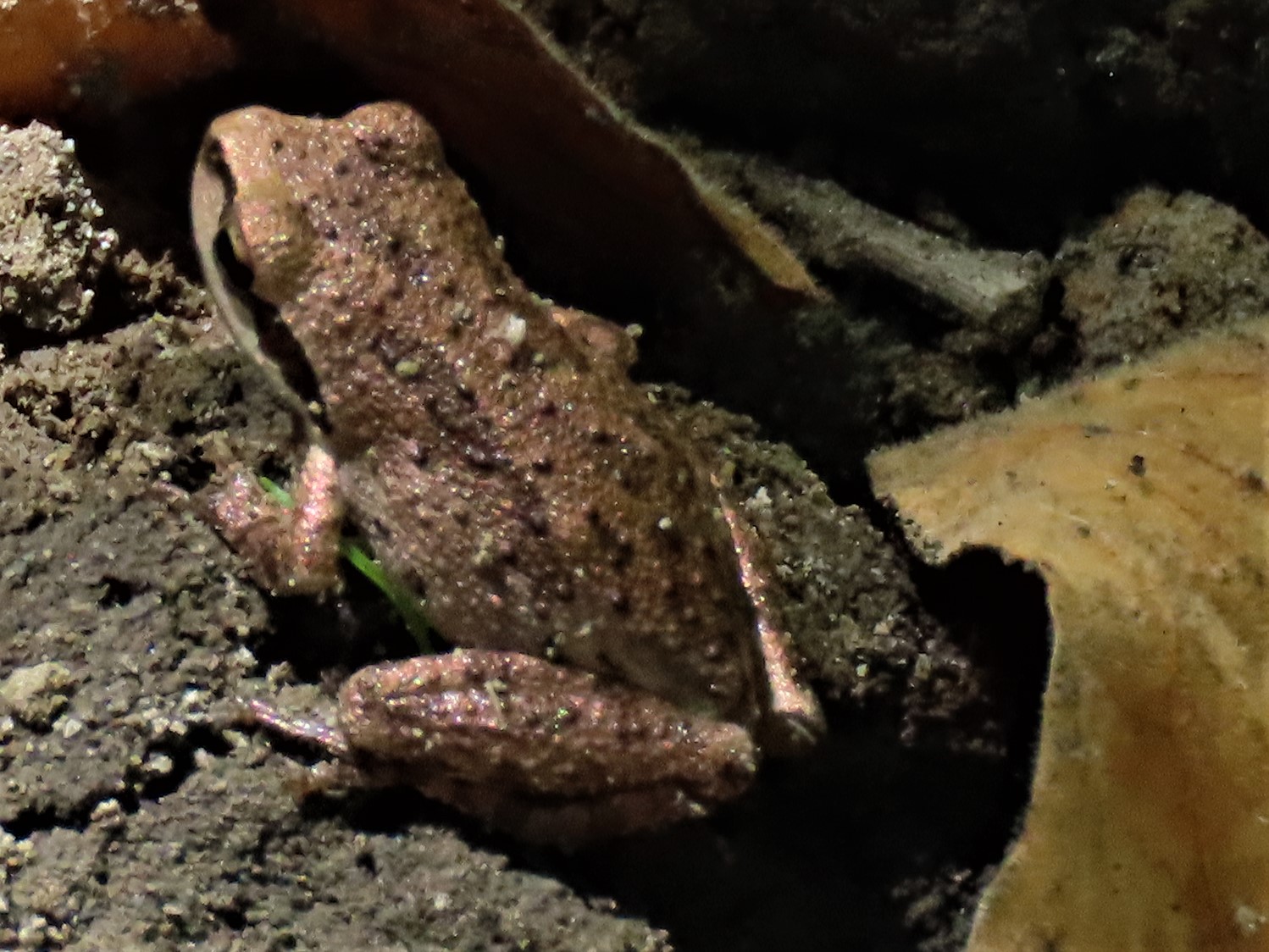 A Chorus tree frog adult, one of many, perhaps thousands, that live on the mitigation land. 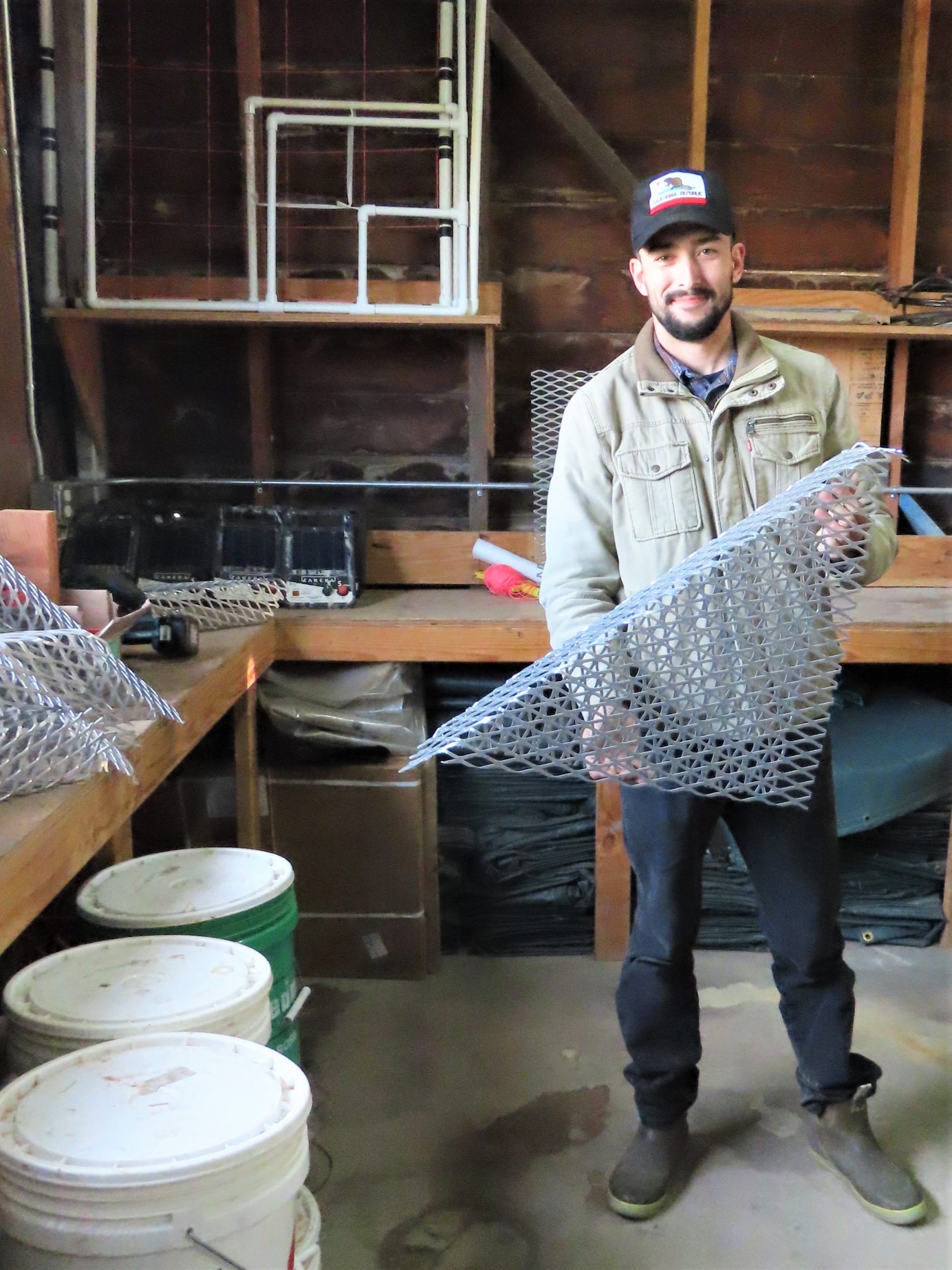 Jake Stubberfield, our Project Technician, holding up one of his created wildlife escape ramps.

Throughout the fall and winter, the Willits staff has been installing wildlife-friendly fencing and modified elk crossings. In addition, modifications to sixty water troughs were made that protect the troughs from livestock wear and tear and winter flooding. These modifications then allowed us to design and install another addition to the water troughs throughout the project that will help to support wildlife survival if a small animal falls in and finds itself trapped: wildlife escape ramps. With many water troughs for the cows that are grazing these pastures during the hot dry summer months, wildlife both large and small have come to depend on them as a water source as the creeks dry up to a few scattered pools.

The Tule elk, Black-tailed deer, and raccoons have no problem drinking out of the troughs. However, the smaller mammals, birds, reptiles, and amphibians that use the summer water are at risk of drowning without escape ramps for them to use.

Fortunately, we have only found a few drowned animals in the troughs over the years; one was a woodrat. A dead animal in a trough is not only very bad for the animal that drowns but is also a hazard to the health of the cows that drink the water. We began to research the best escape ramps to prevent wildlife mortality and maintain water quality. The first one we constructed was a floating board with a rope attached. Even though it was adequate we decided to keep researching for a better model.

Here is some important information we found on the NRCS USDA site nrcs142p2_041023.pdf (usda.gov) Several basic principles should guide the design and installation of all wildlife escape ramps. An effective escape ramp should:

This information was invaluable, and our staff began the process of brainstorming customized ramp ideas that worked in our troughs for our settings. The photos show what we came up with. Jake Stubberfield, our Project Technician for the Willits Bypass Mitigation Project, designed and made the first prototype right away. Once it was installed and we all had a chance to look closely at the model, it was decided that this model would be used for all the troughs. One down, fifty-nine more to go! Jake has been working steadily on building them and getting them fitted. This was a very satisfying project to be involved in. Knowing that we have done our best to prevent needless wildlife deaths is a good feeling. As summer approaches and the presence or lack of water becomes a life and death situation for many animals, our troughs can make a positive impact on their survival.