What is That Downy Woodpecker Doing? 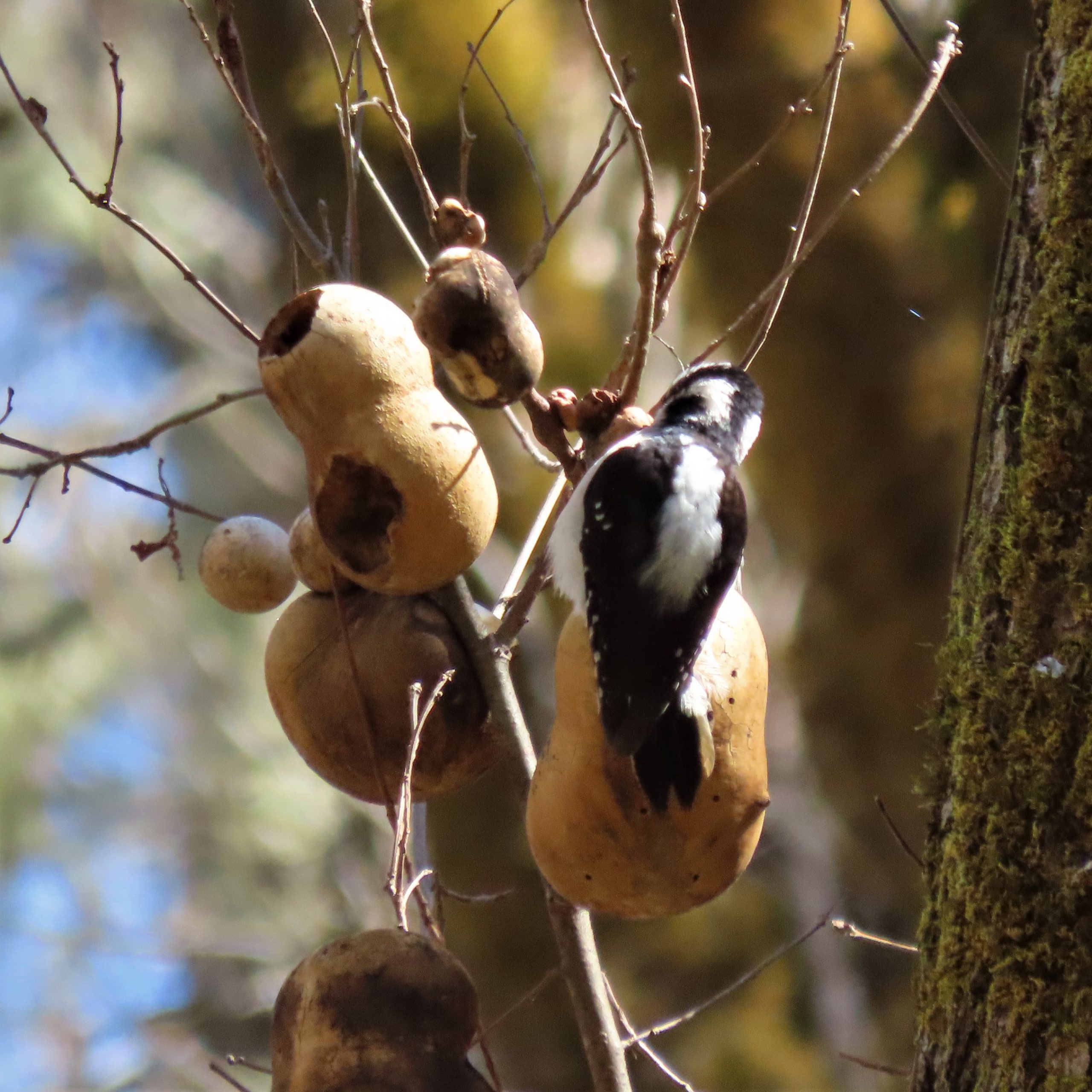 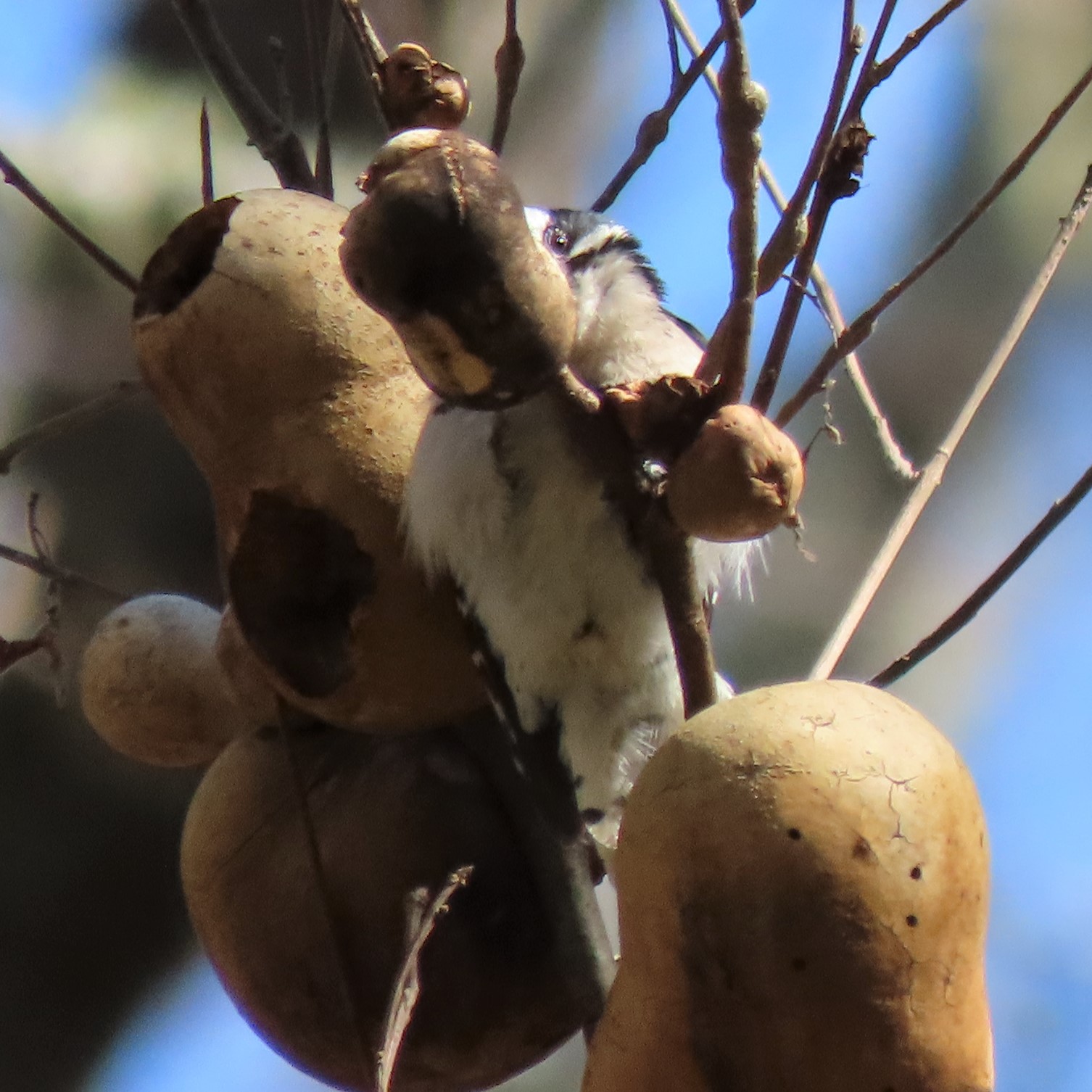 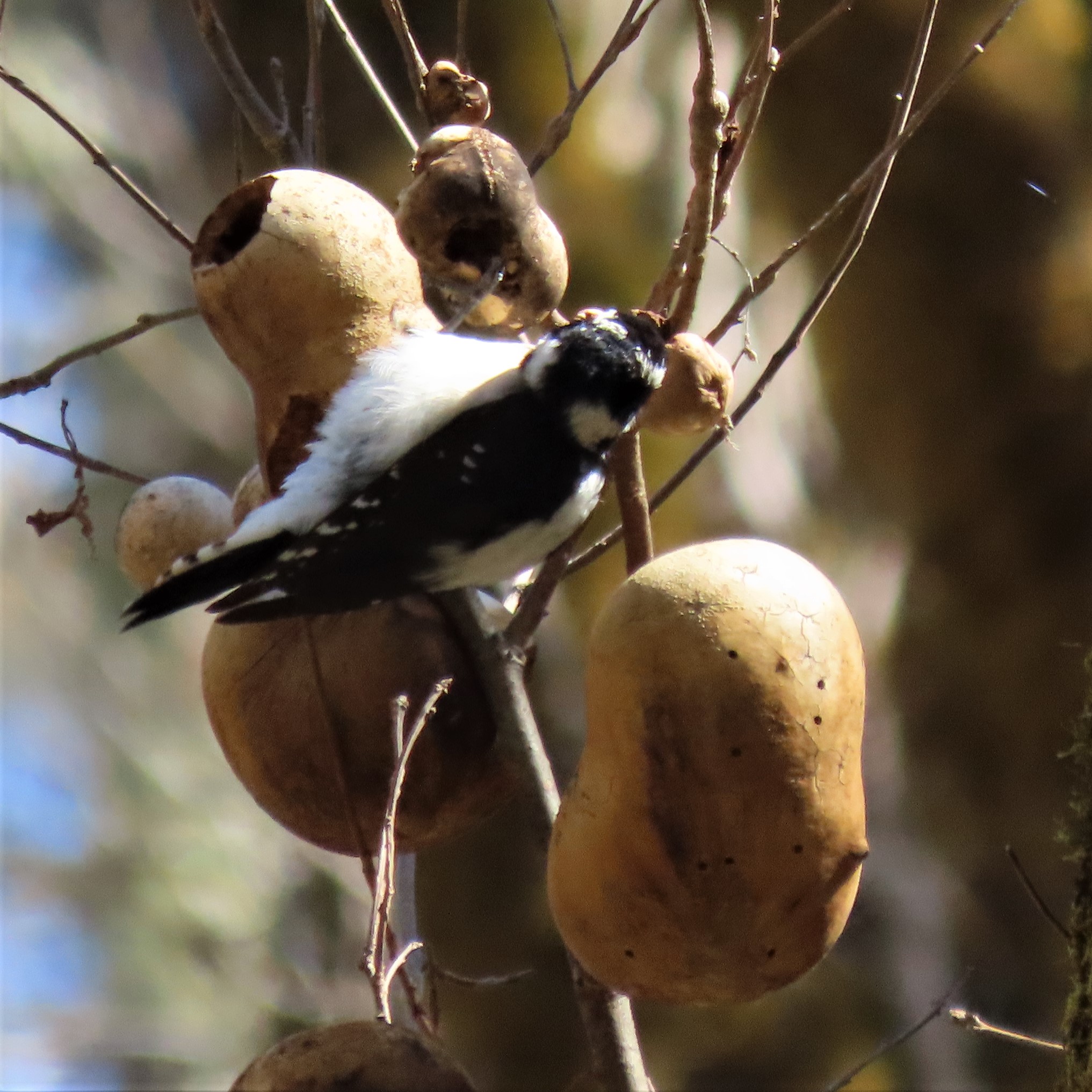 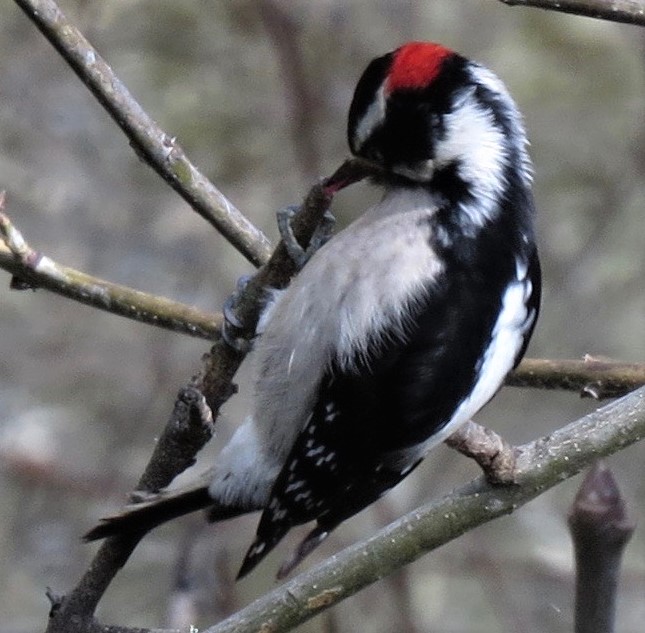 A male Downy woodpecker using its tongue to get food out of a twig.

Now that spring is upon us it is hard to pick what topic to write about. There are more and more birds singing and building nests each day, flowers are bursting out, and the bull Tule elk have been dropping their antlers and looking quite strange and uncomfortable. Some of them have already begun to grow their new antlers back with startling speed.

These subjects will be for another day. What has caught my attention today is the smallest North American woodpecker, the Downy, Picoides pubescens. This is because I saw one doing strange acrobatics above my head. A female Downy woodpecker, which is distinguishable from the male because of its lack of a red cap on its head, was hanging on to and pecking quite hard upon a collection of Valley oak galls.

Oak galls come in many sizes, shapes and colors but are all products of the oak trees’ reaction to the larvae of certain wasps known as gall wasps. These larvae cause the oak tree to manufacture cells and substances that produce the gall and in turn the wasp larvae use the gall as both food and shelter. The galls usually do not harm the oak; however, the gall formation is a defensive measure by the oak tree and therefore contains strong natural astringent compounds such as tannic acid. In fact, according to Botanical.com, oak galls are the most astringent vegetable compound in the world.

Since Downy woodpeckers mostly eat insects, it is likely that it was looking for either the wasp or other insects that had eaten the wasp larvae. I could see it had made large holes in the galls. It was the first time I had ever seen a woodpecker pecking holes in these plentiful oak galls. Sometimes I have found them on the ground with large holes in them and thought that other animals, like rodents, had gnawed on them.

Downy woodpeckers are found throughout North America and most are year-round residents. This means they can be seen throughout the year in all seasons. They are omnivorous primarily eating insects such as beetles, weevils, ants, plant lice, and caterpillars. They also forage for fruit, seeds, sap, and some cambium tissue. Downy woodpeckers will come to feeders filled with suet and have been seen at oriole and tanager feeders. The males will protect their territory from other males and the females will chase away other females. They are monogamous during their breeding season and may have the same mate for more than one season. Both male and female help to excavate a nesting cavity in soft tree tissue that may have mushroom damage. They are recognized by their black and white color, black wings with small white dots, and a very large white patch down their back. They are a small bird overall and have a small chisel-like bill. The look-alike Hairy woodpecker is a bigger bird, and its bill is larger, about 2/3 the length of its head.

In the late winter it is common to see the male Downy woodpeckers pecking at the end of small twigs and at the end of summer I often see both males and females working their way down a Mullein flower stalk eating insects out from the dried flower buds.

It was fun to watch as this acrobatic little woodpecker hung upside down hammering on the hard galls.