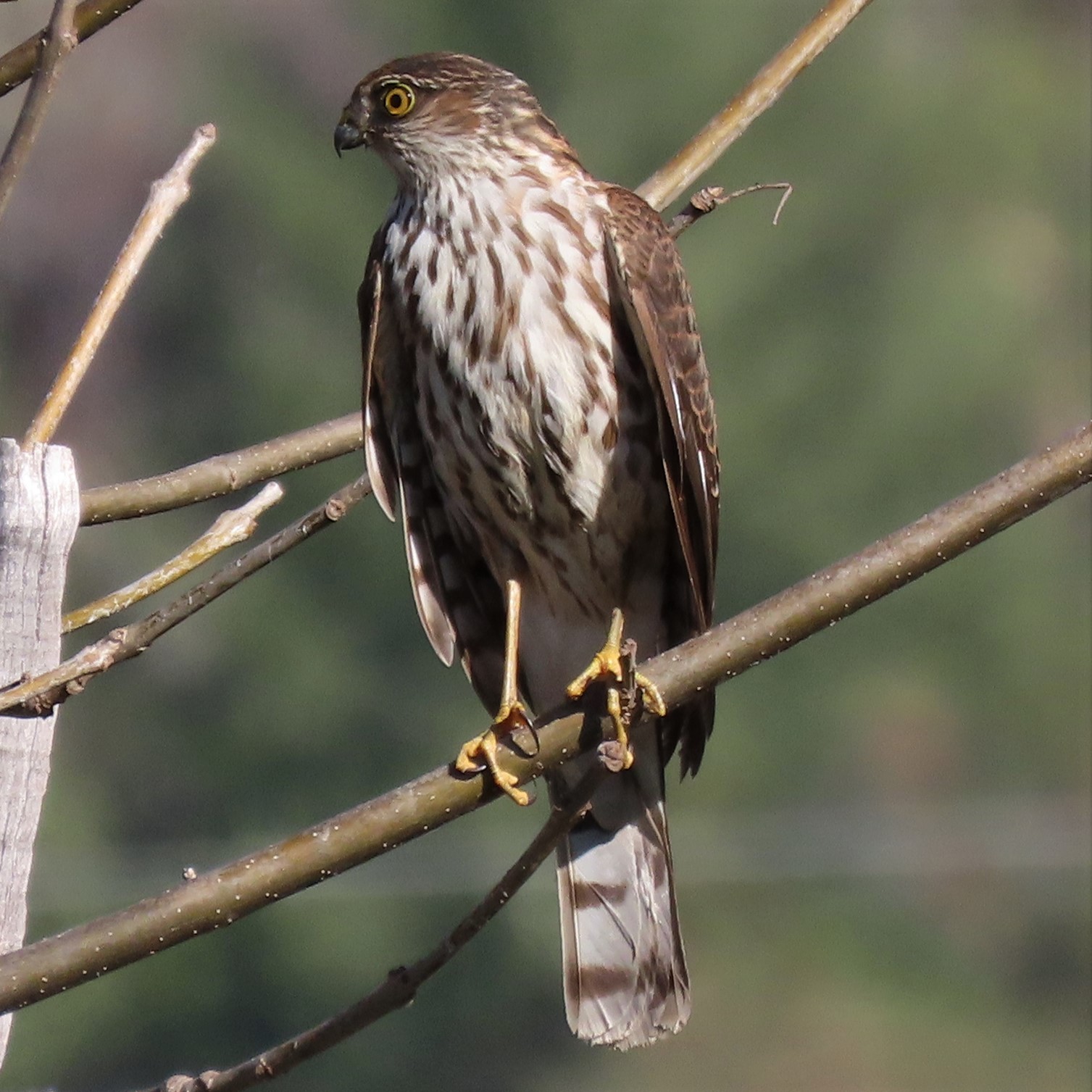 This is a juvenile Sharp-shinned hawk intently trying to catch some White-crowned sparrows. 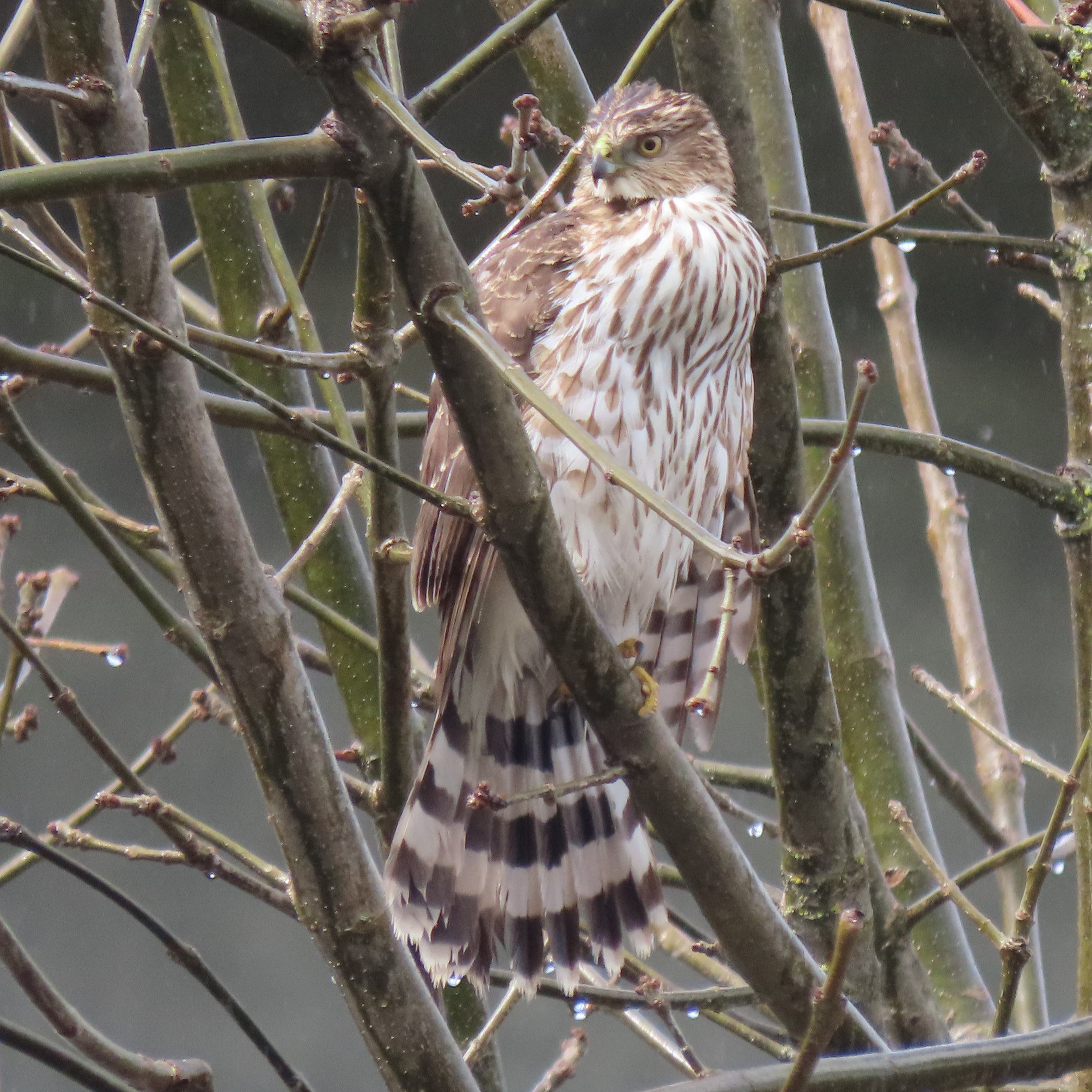 A very wet juvenile Sharp-shinned hawk showing its round yellow eye and its skinny legs. 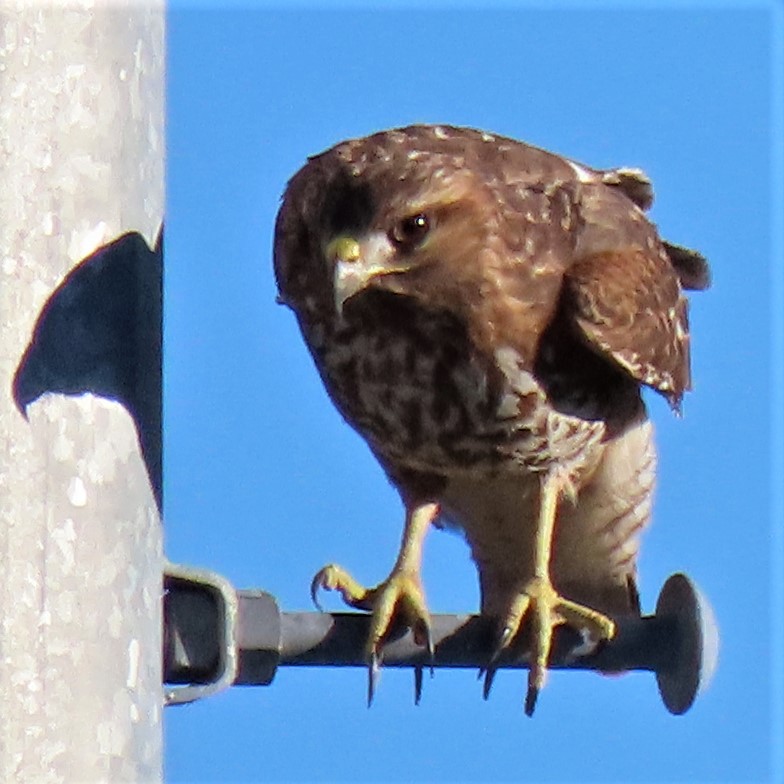 A Cooper’s hawk where you can see the thickness of its legs. 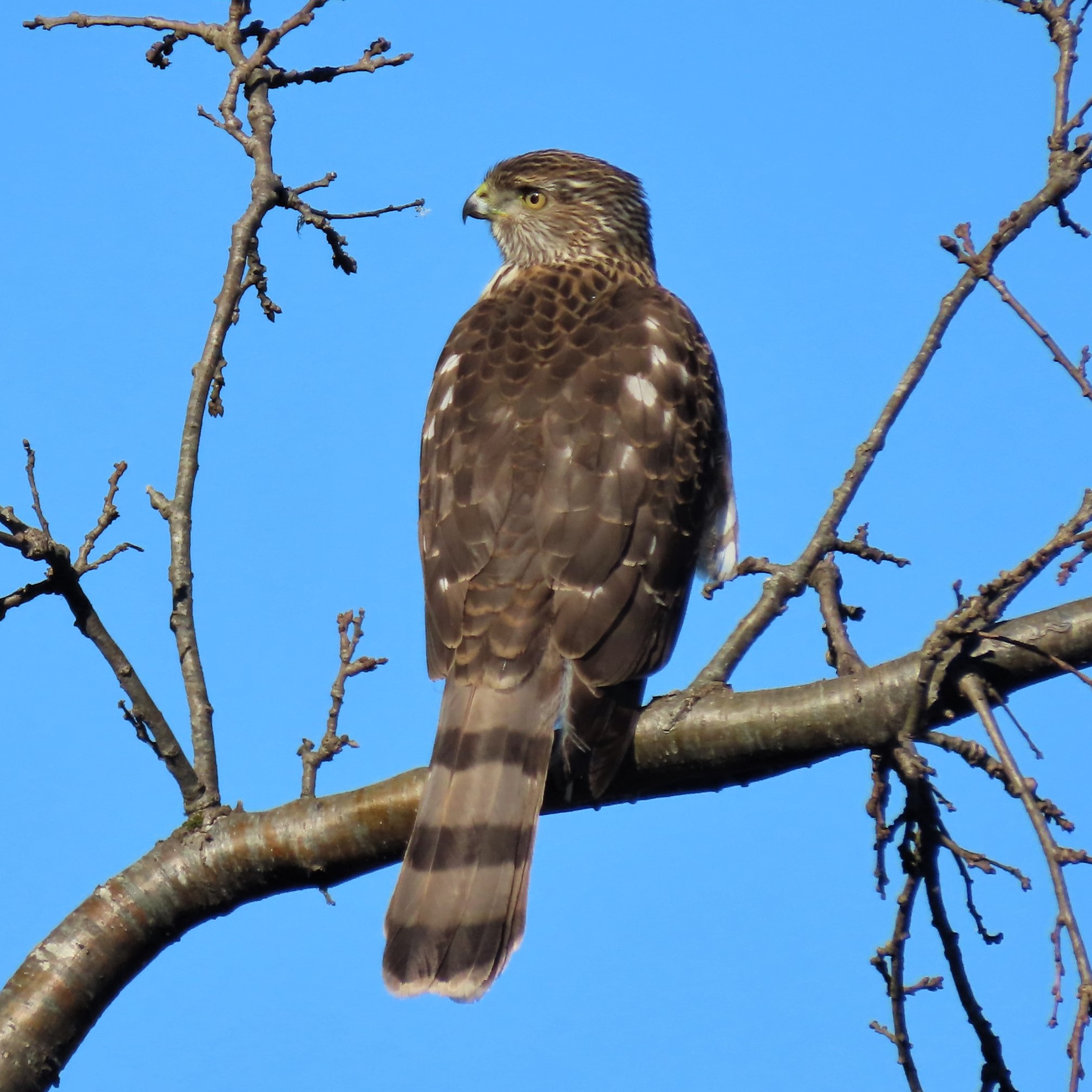 The backside of a Cooper’s hawk with the larger, more square head-shape and lighter nape.

In the winter, our valley becomes a place where hawks are seen frequently. Two hawks in the Accipitridae family that can be residents or migrants are the Sharp-shinned hawk and the Cooper’s hawk. These two hawks are easy to misidentify because they can look so similar to each other. The Sharp-shinned or “Sharpie” as many birders call them, are a smaller version of the Cooper’s hawk. But size is a tricky thing I have found not only because the large female Sharpie is about the size of the small male Cooper’s, but also because if you have nothing to compare it to, size can fool you! This recalls the Hairy and Downy woodpeckers, who are also smaller and bigger versions of each other. The trick is when trying to tell them apart try to look at several characteristics (if you have the opportunity). It is usually the sum of 2-4 characteristics that help you make up your mind. The other trick I use is to take a photo and then look at it on my computer later. Then I can enlarge it to see details I might not have gotten out in the field with my binoculars.

Sharpies are usually smaller than Cooper’s so if you get a good look at the size compared to another bird like a crow, if it is smaller than the crow then it is probably a Sharpie but remember to look for more than just one trait to tell you what it is. Is the tail squared off at the end and not lined in white or is it rounded with a white edging? The Sharpie has that squared off tail that has a notch and with no white edging at the bottom. Does the head look bigger and extend past the “wrists” of the wings or is it a small head with the wrists pushed forward? Cooper’s have the larger head that extends past their wrists and have a lighter band across the back of the neck called the “nape” making it look as though it has a dark cap. Their wings can look straighter as they fly. If you see the hawk perching look at its legs. Sharp-shinned hawks have pencil-like, skinny legs while Cooper’s hawks have thicker, like your index finger legs. There is a difference between the silhouettes that each bird casts too. The Sharpie has broad shoulders and narrow hips while the Cooper’s sitting body is more barrel-shaped. A friend once told me that the Sharpie’s eyes are more clearly seen, almost bulging out of their heads whereas the Cooper’s brow seems to squash down on their eyes, so they have a fierce look that makes their eyes look smaller. Hopefully, these tips will help you to decide what you are looking at. Over time it will become second nature to go through the checklist of questions so you can tell which of the two Accipiters you are looking at.

More than 90 percent of what a Sharp-shinned eats is small birds while the Cooper’s will eat doves, robins, flickers, small mammals, and even reptiles. Both species look different as juveniles. Eye color changes from yellow to red as an adult and the backside dorsal-coloration transitions from brown to grey in adulthood. Their chest color starts out as teardrops of spread-out lighter browns and greys and ends up as darker and reddish barring when adult. Right now, on the mitigation lands, I see quite a few juveniles in our area who are possibly migrants on their way to Argentina.

You can find these two hawks in riparian areas, woodlots, and where there are many small birds congregated, like in your yard around a bird feeder! Happy birding.