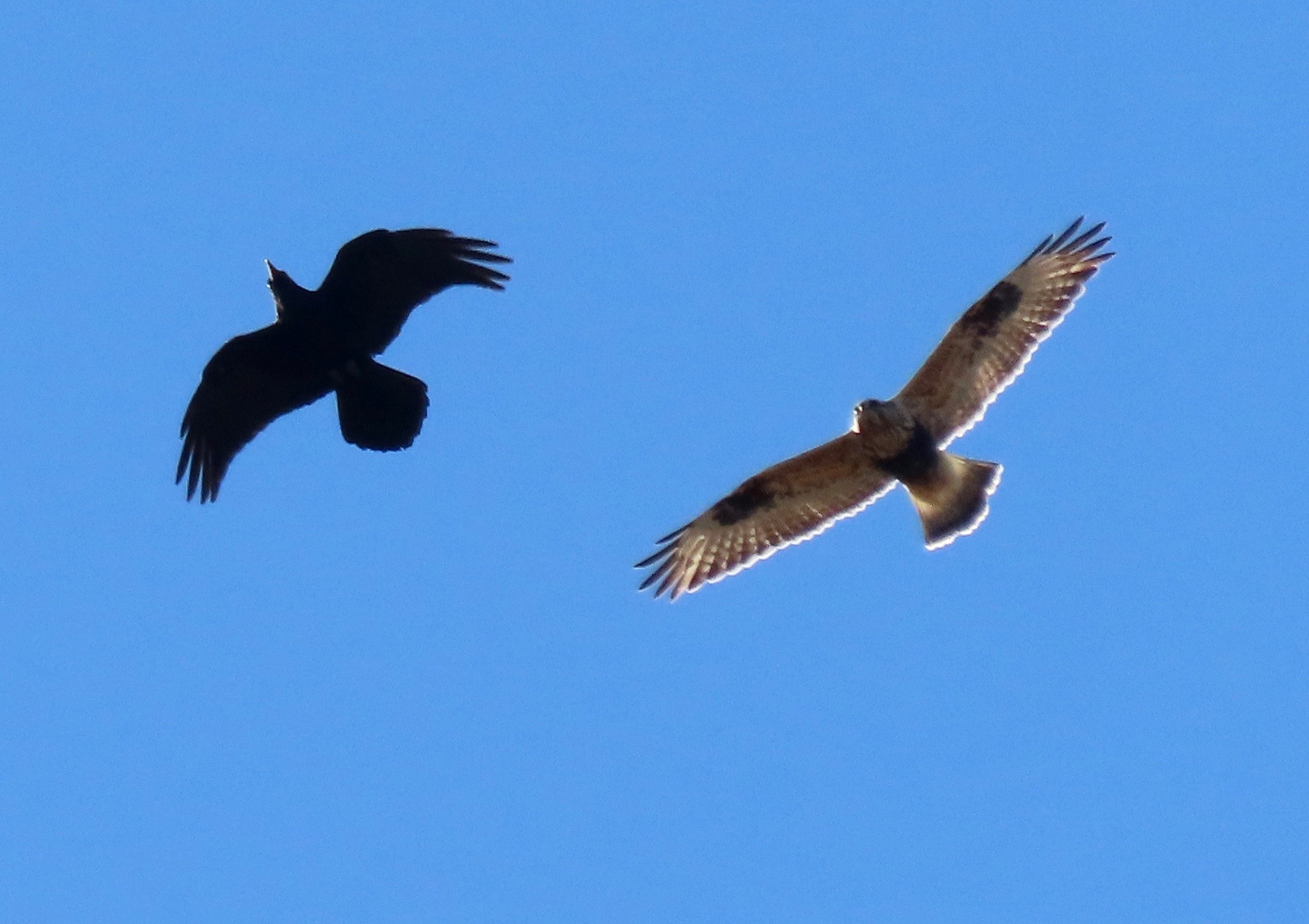 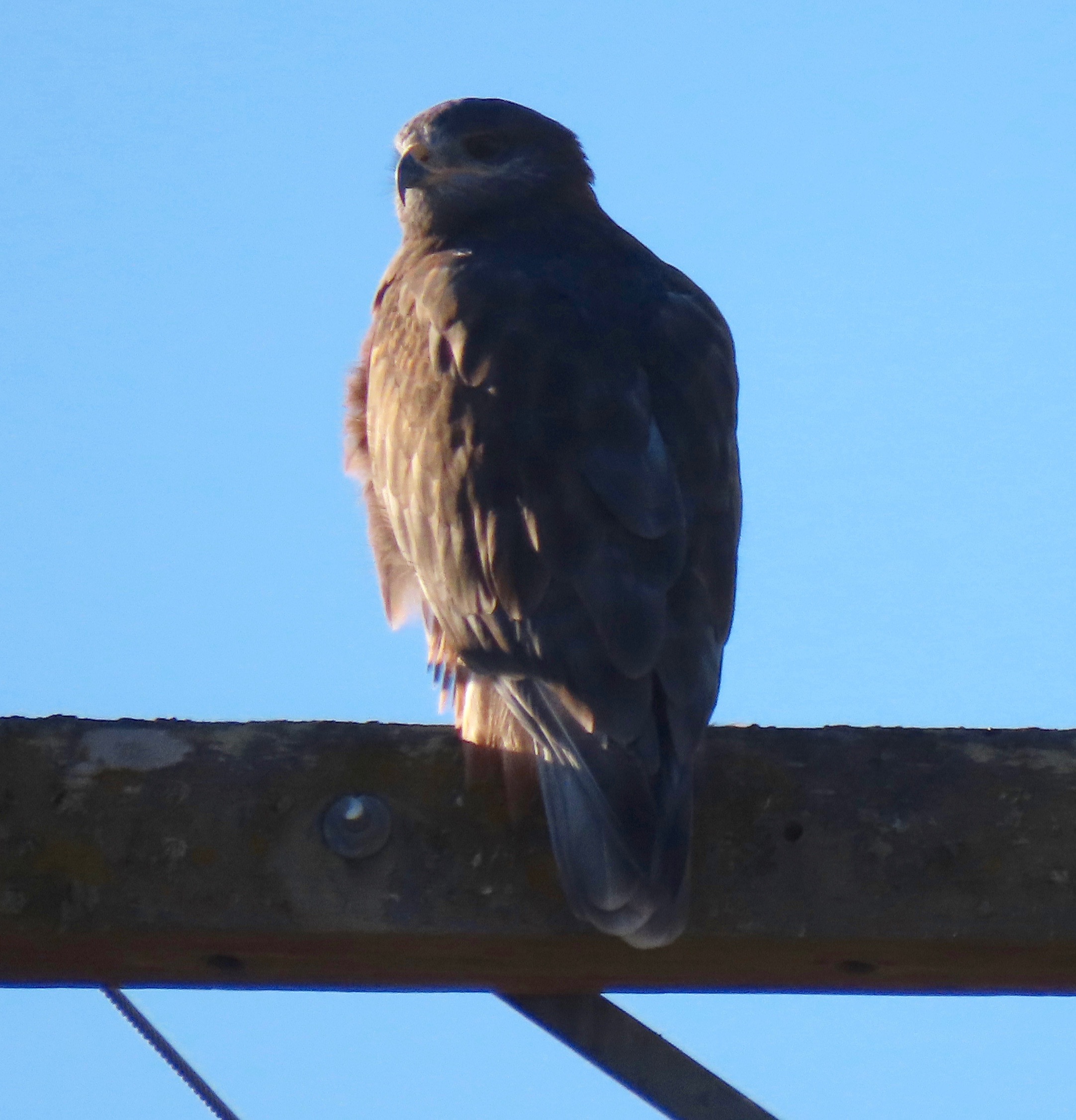 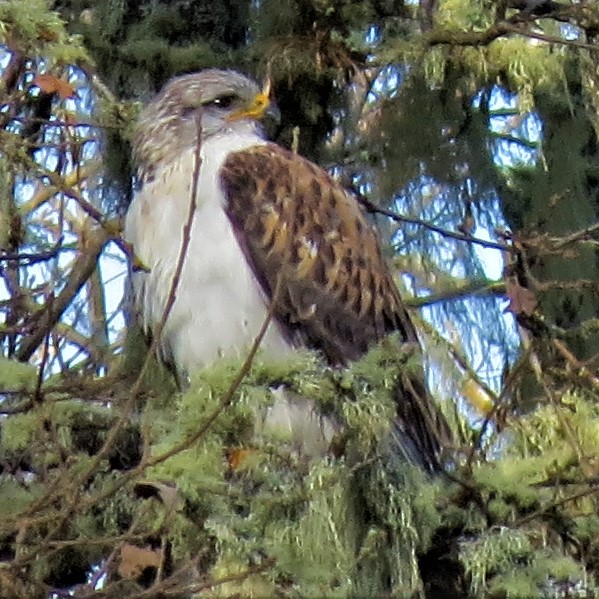 In October and November there are many raptors that arrive here in the Willits Valley on their way south from the far northern regions. This week I was lucky to see two of these species, the Rough-legged hawk and the Ferruginous hawk. The Ferruginous hawk is migrating from northern grasslands, sagebrush country, saltbush-greasewood shrublands, and edges of pinyon-juniper forests at low to moderate elevations.  The Rough-legged hawk spends its summers in the arctic tundra catching lemmings.

The Rough-legged hawk Buteo lagopus I spotted was being harassed by a group of ravens. Their raucous calls alerted me to its presence. The name “Rough-legged” refers to the hawk’s feathered legs. The Rough-legged hawk, the Ferruginous hawk, and the Golden eagle are the only American raptors to have legs feathered all the way down to the toes. The Rough-legged hawk is a beautiful black and white bird with fairly long and narrow wings. The dark wrist patches and belly band along with a white tail base and a dark band at the tip of the tail are diagnostic. It likes to “kite” (hovering in strong winds) like the American kestrel and White-tailed kite when hunting. When they are here, they are mostly hunting for Jack rabbits and cottontails. As nonbreeding adults these hawks need to eat a quarter pound of meat daily, or one tenth of their body mass. This averages to be about five small mammals each day.

The Ferruginous hawk Buteo regalis is another large hawk in the group called buteos, which have broad long wings and short tails. The Ferruginous hawk has long broad wings that are pointed at the tips. Its head appears large relative to other raptors. One distinguishing characteristic about this bird is its overall light color, with a white belly and white tail and a ‘V’ shape of rusty color where its legs are. As with many species of buteos, there are darker morphs and variations that do not fit the common description but this one certainly did! They also “kite” while they are hunting rabbits, pocket gophers, and other small mammals. Each year I see two or three Ferruginous hawks in our valley often sitting on the telephone poles for hours at a time looking all around. It is a delight to get to see these migrating hawks in our area.