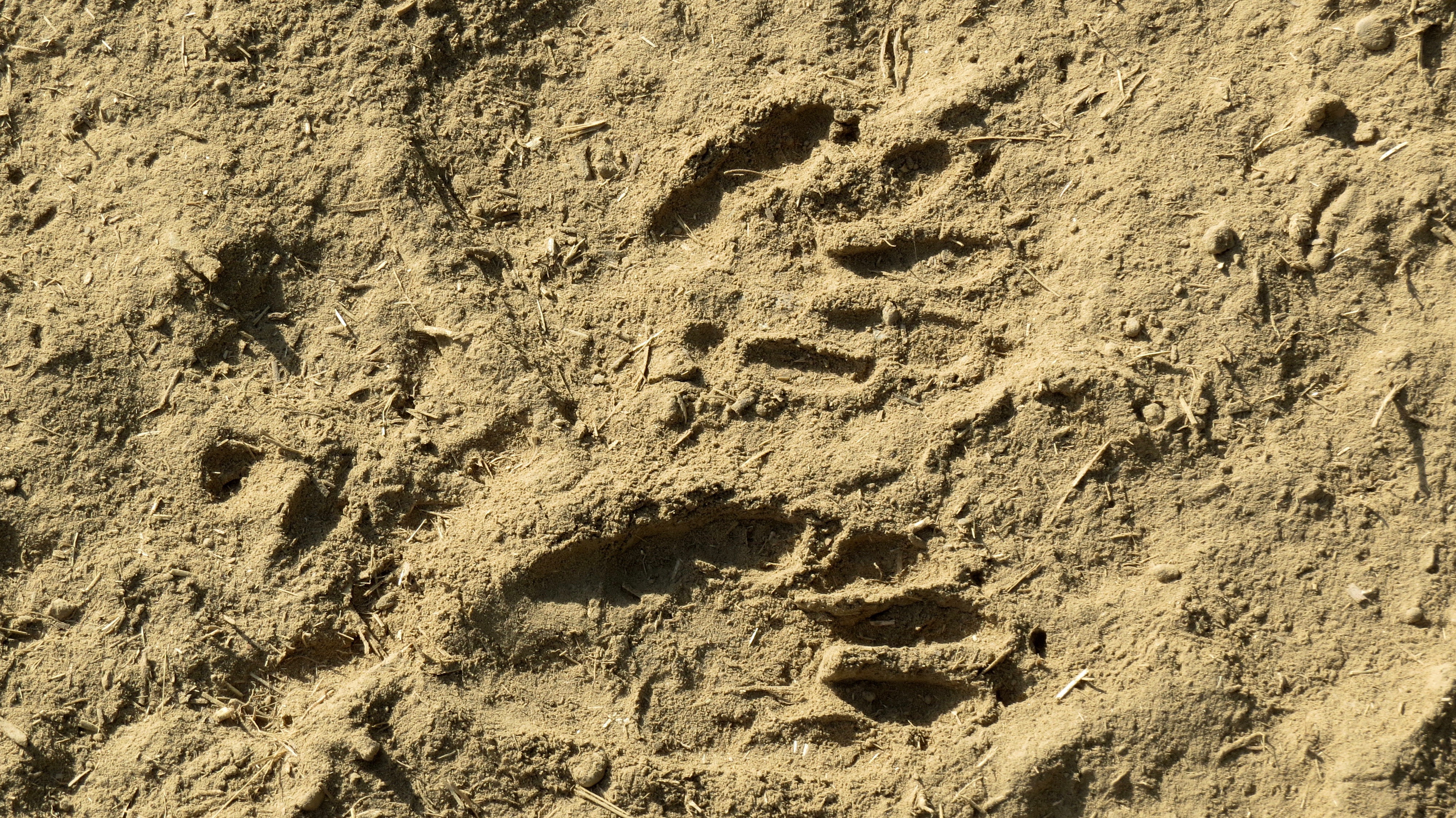 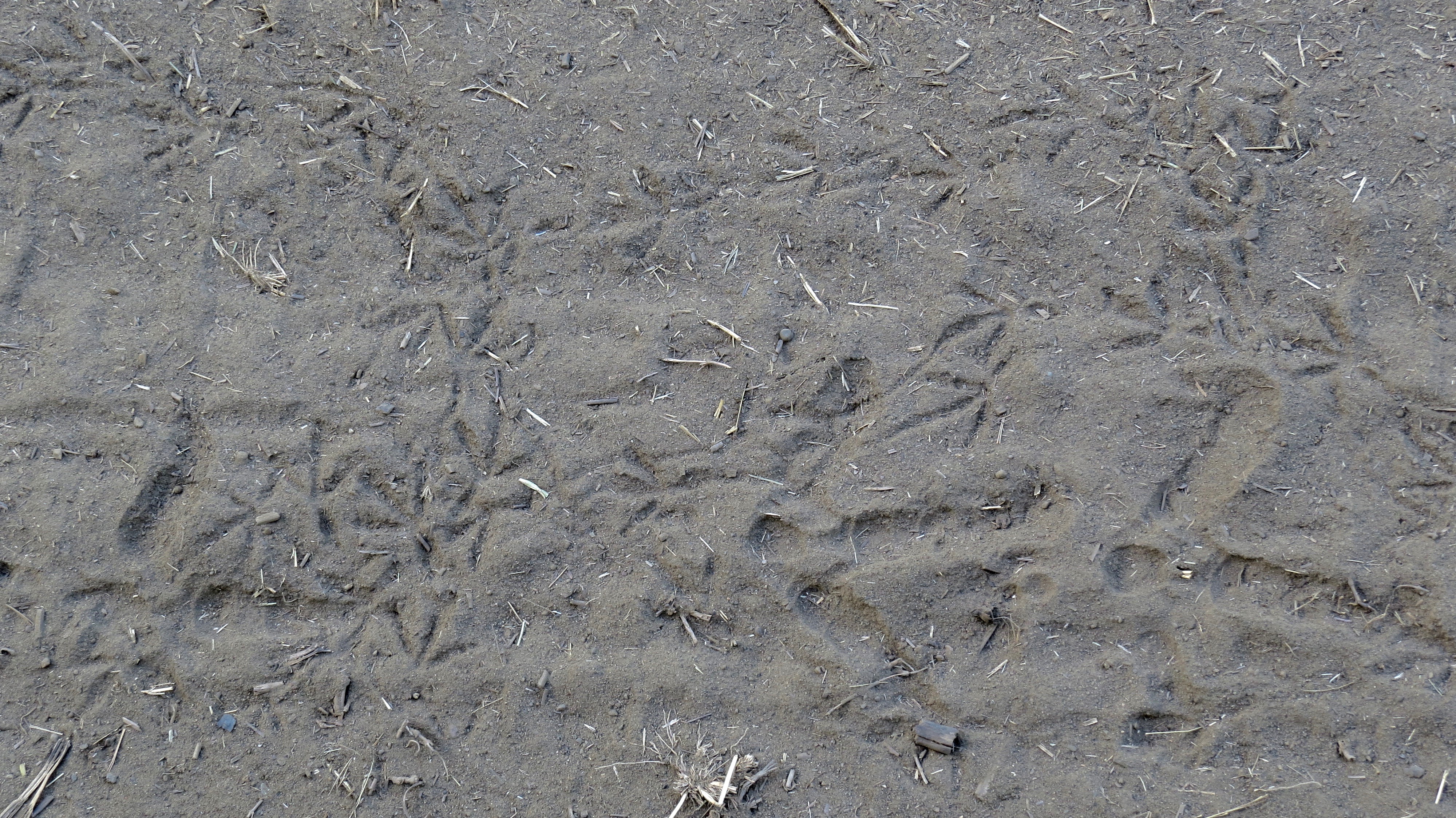 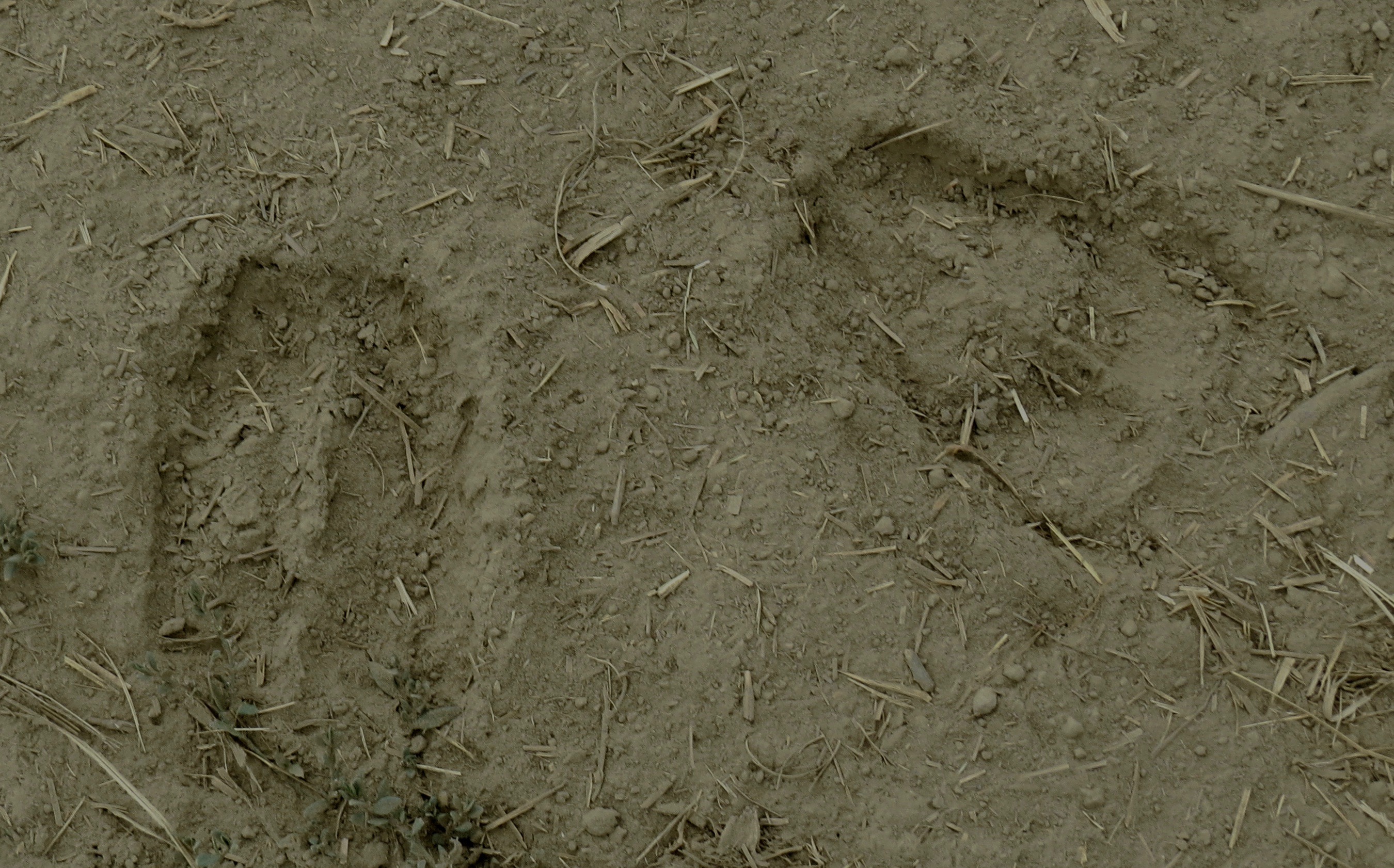 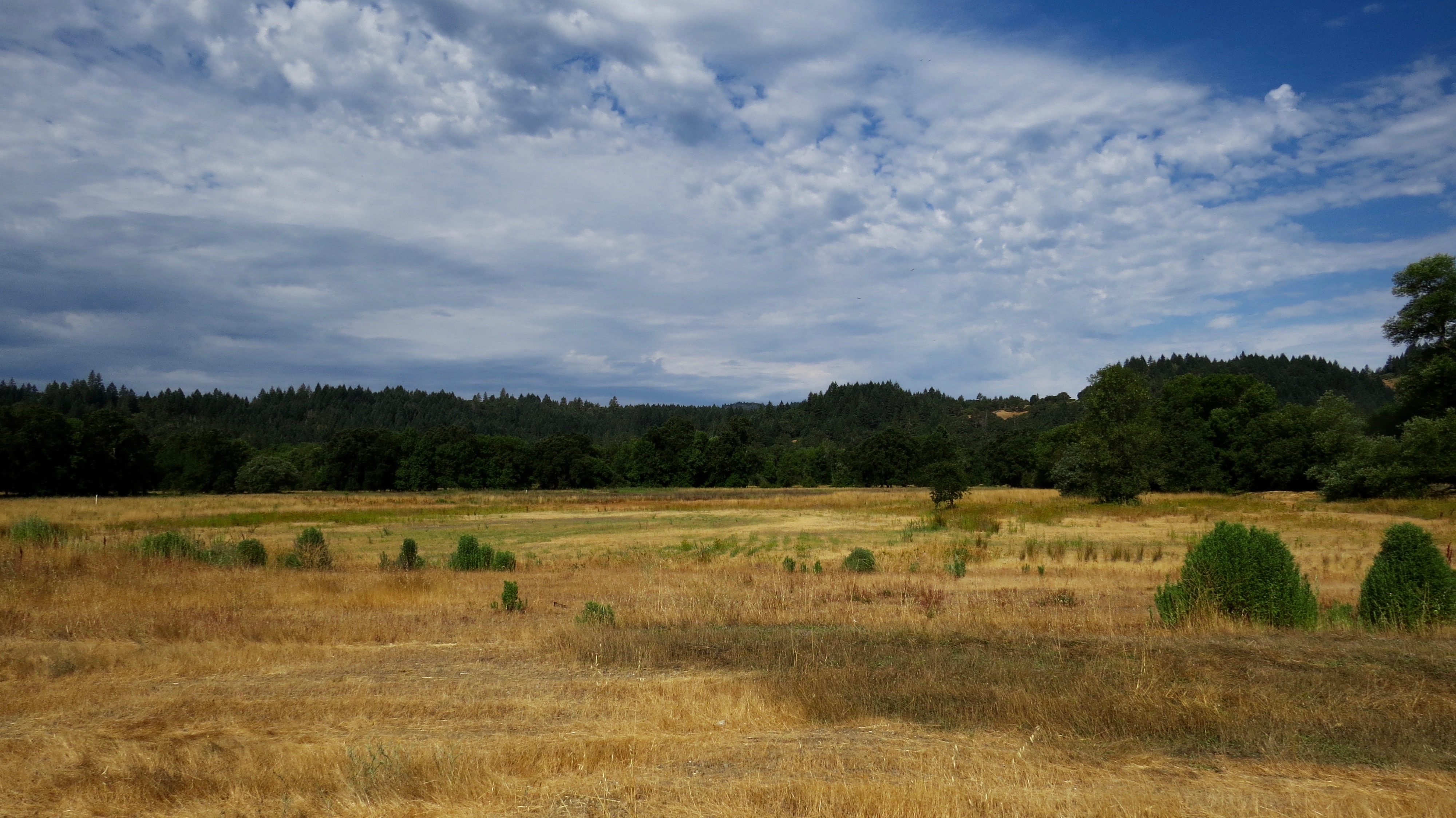 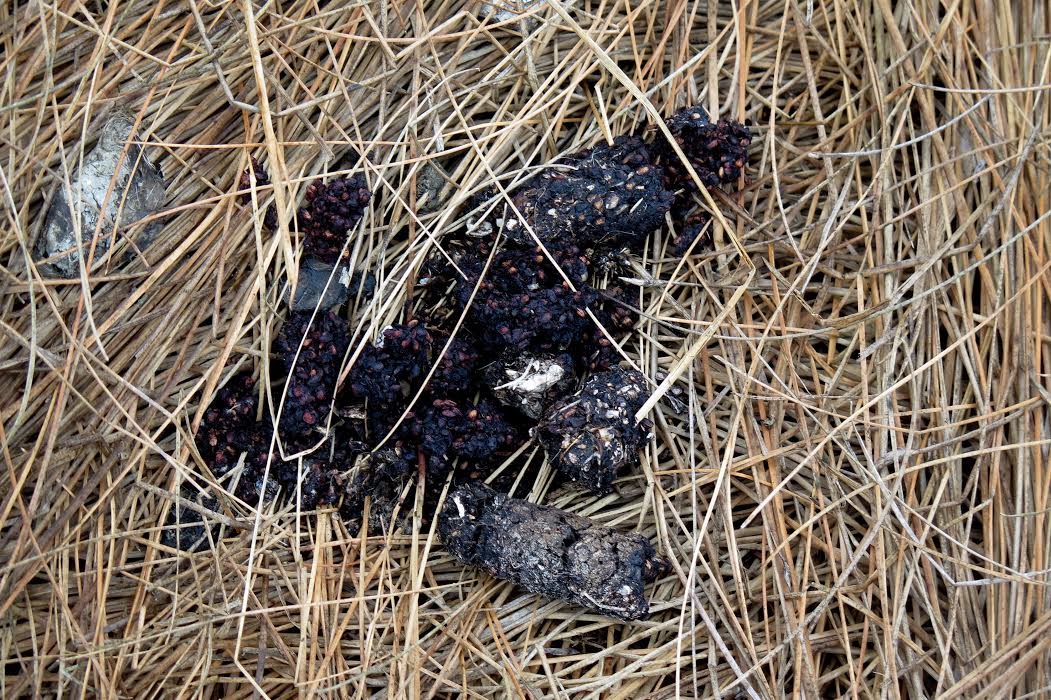 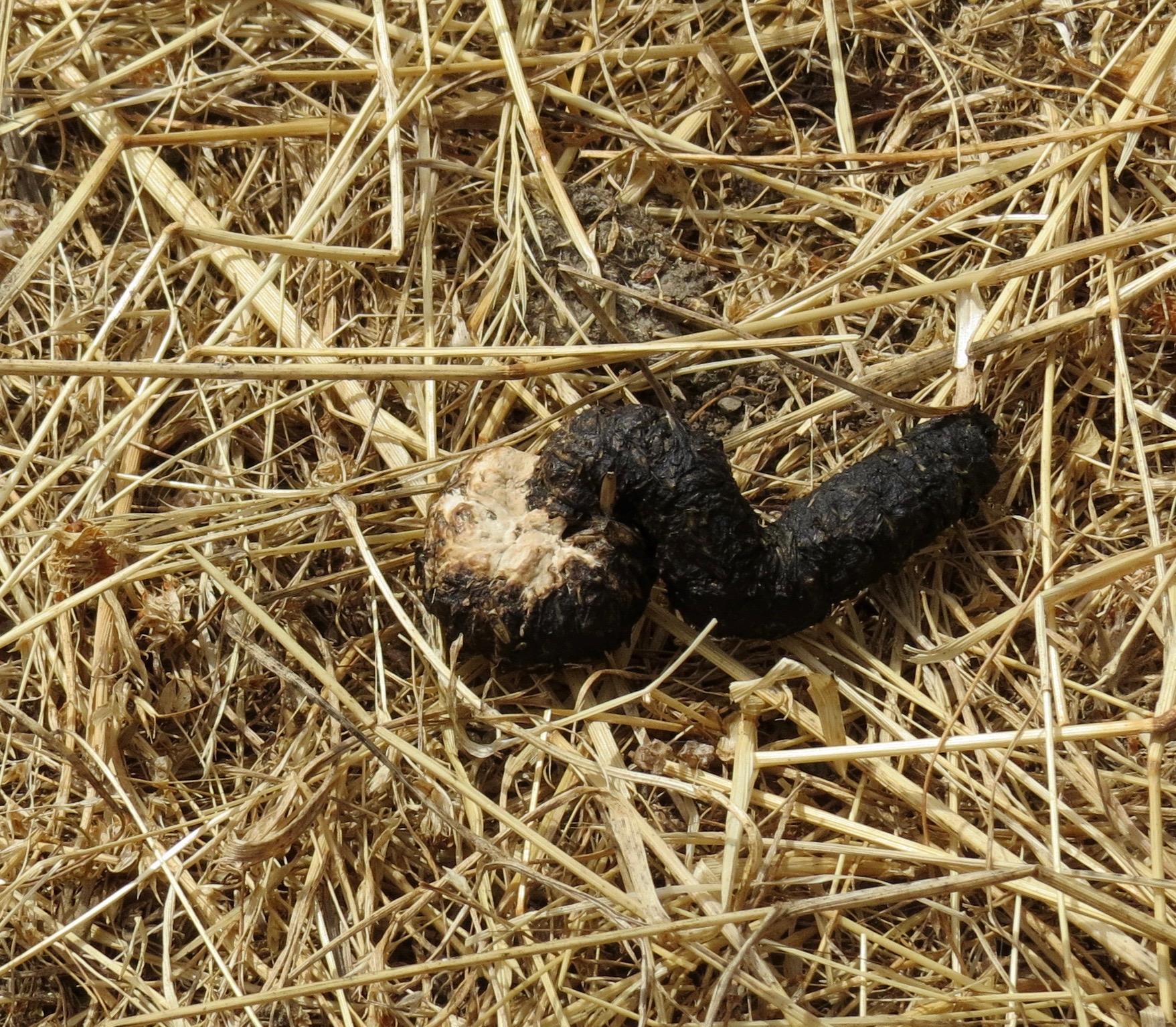 It is an unusual summer morning. The sky is full of grey clouds and it feels like it is going to rain. I am thrilled by this idea and have not brought my raincoat. It is warm with a breeze that is full of the smells of summer in the valley, pennyroyal, and grass mostly. Today I am looking at tracks and scat (or animal poop) to document more of the wildlife that lives on the west side of Outlet Creek. As I begin to walk the large circle from Mill Creek south to Outlet Creek north, the dust in the road is full of great tracks from a variety of animals. These footprints tell a story of the way animals have traveled across this area.

The first tracks I see, are the tracks of the Northern Raccoon, of which there seems to be an abundance of all over the mitigation lands. Their tracks are always very defined and clear as though they are purposeful walkers. There are large tracks and smaller tracks indicating that there are young animals traveling with parents. Their prints look like little hands with the front paws having longer toes than the back paws. The heels are deeply outlined for me to see. A little bit further down the path, I spot some scat that looks like it is from a raccoon. There are multiple rounded pieces that appear to have crayfish or crab parts in them. Our local Northern raccoon, Procyon lotor, can get up to 13 plus pounds and has a black mask and bushy tail with anywhere from 4 to10 black rings. Its front paws are very dexterous. These paws are used for hunting, grabbing, and investigating for crustaceans such as crayfish and crabs, and also clams, fish, and insect larvae. Sometimes I think it just seems they are feeling with those paws and they are not using their eyes at all! Their scat tells the story of their varied diet of plant material and animals. They are omnivorous, mostly nocturnal, animals that prefer to live along wooded riparian areas. I have seldom seen them when it is not dusk or night. Of course, they have adjusted to living with humans and love to eat the trash we throw away.

The next tracks I come across are a combined set of large bird prints with smaller bird prints. The larger tracks are from the introduced Wild turkey, Meleagris gallopavo. Wild Turkey is a common sight out in the valley. For me, I usually hear them before I see them. This time of the year the large youngsters are following along the adult female making all kinds of funny sounds. The young males are called “jakes” and have shorter tail feathers and shorter beards (which is the tuft of black filamentous feathers protruding from their breast). They have excellent eyesight and a keen sense of hearing. Even though I always am fascinated with these birds I know there is a controversy raging about them and their effect on native populations of amphibians and reptiles. This species is not a native of California but were introduced by the California Fish and Game Commission to generate revenue from hunting license sales. They are originally from the east coast. I have watched a huge flock of them (100 plus individuals) move through a grassland eating whatever creature was moving. If this is grasshoppers, this may be a good thing for a rancher or farmer, but when they are eating the beneficial snakes, lizards, frogs, and even turtles, this may be creating an ecosystem disaster. Further along, I find a scat from a turkey. For an adult, this can be about the size of a quarter, with a white area  (the uric acid part) attached, that all bird scat has.

The smaller tracks are from the California Quail, Callipepia californica. This is one species of our local quail with Mountain Quail, Oreortnx pictus, found in the higher elevation areas and the California Quail found commonly everywhere else with some overlap in our canyons. The California Quail is about the size of a soccer ball, ten inches long, with a grey breast, intricately scaled underparts, and a forward-drooping head plume. Their call, which sounds like “Chi-CA-go” is a common sound in the chaparral and hills of Willits. This time of the year the young are also making many different sounds, calling their parents who are both watching out for them. They eat mainly seeds, leaves, flowers, catkins, acorns, and invertebrates such as caterpillars, beetles, mites, millipedes, and snails.

There are many smaller mammal tracks mixed with deer and elk tracks. These are harder to take photos of but so interesting to observe. I can see beetle tracks, snail tracks, and even a snake track going across the road. The Tule Elk, Cervus elapses nannies, tracks stand out because of their large size. I am sorry I did not have a coin to place next to them to give a scale of their size. Their scat appears a bit like deer scat but much larger. The road is a path for more than just the people and vehicles that are out here working, it is a highway for animals of all sorts.

All around are the signs of the wildlife we live with, it just takes focus and a moment of really looking to see it.