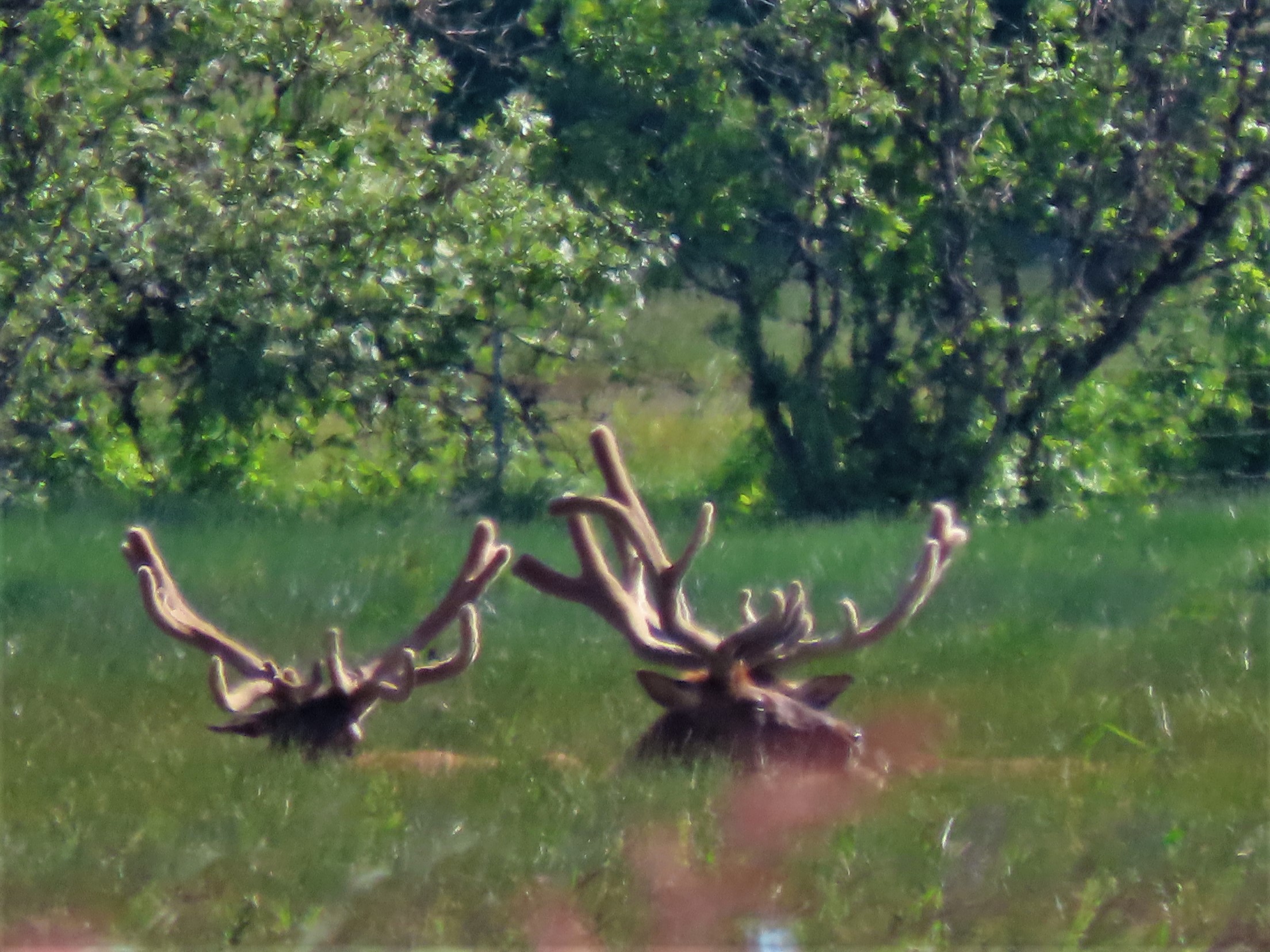 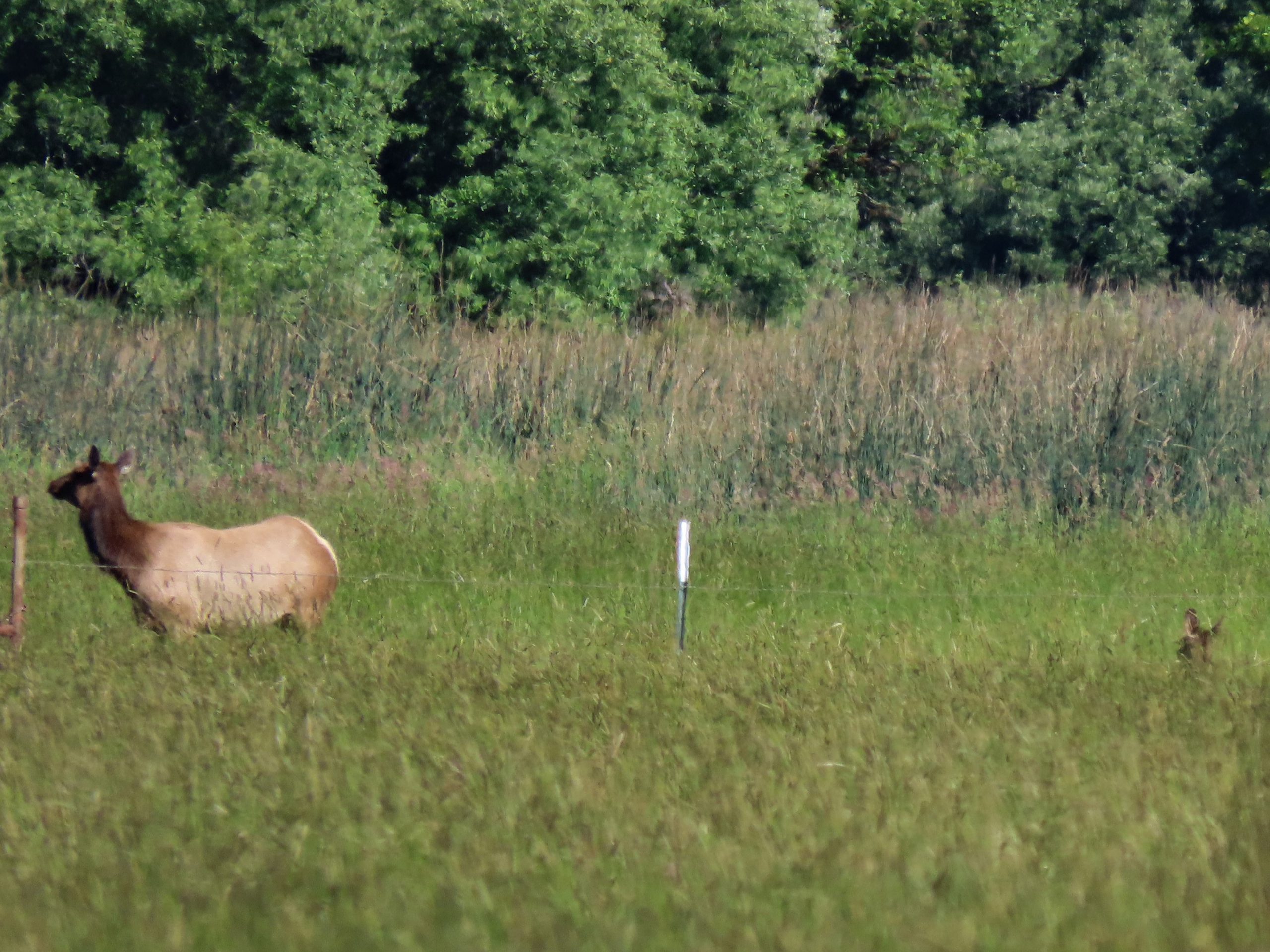 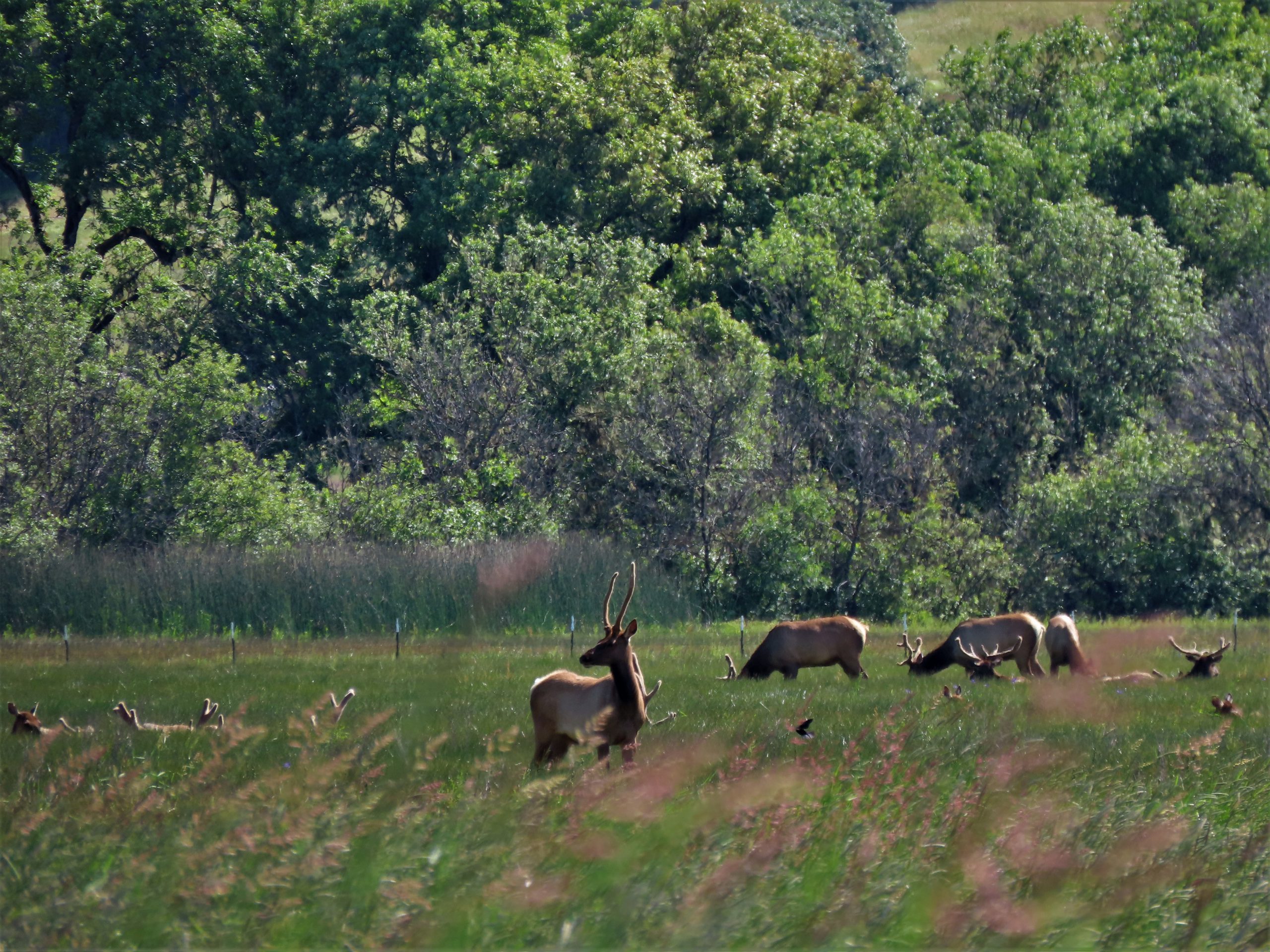 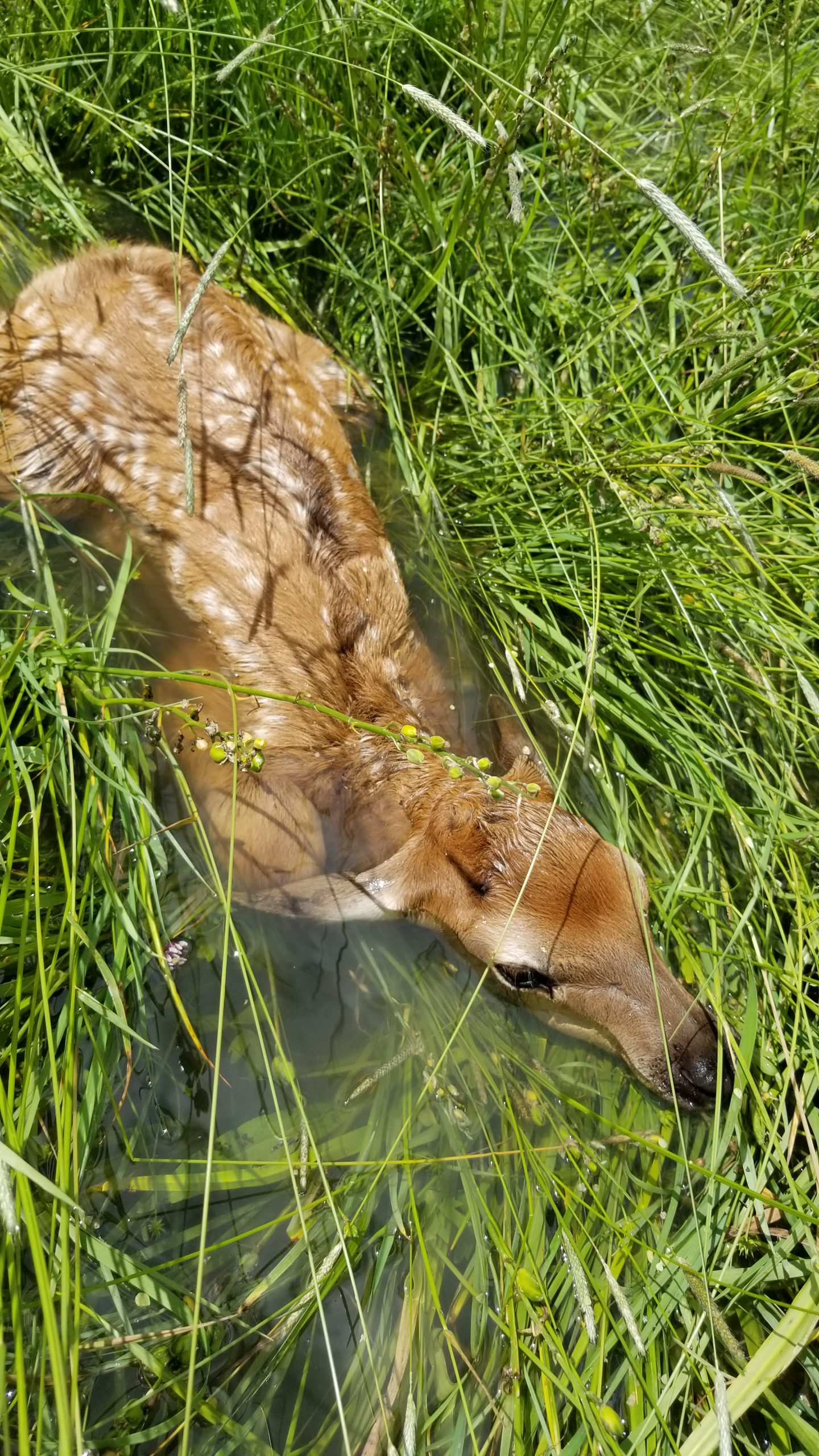 It has been two weeks now since I have seen the Tule Elk, but I wanted to post what they are up to during this time of the year. The bulls are still “in velvet,” which is a term for the process that the antlers go through as they are growing back in the spring. The photos of the Tule elk in the pastures shows the antlers in their velvet stage. I wrote about the velvet stage last year at this time and I thought it would be good to review some of the important and stunning facts.

Antlers are bones. They grow from attached points on the skull called the pedicle. When antlers are growing, they are covered with vascular skin called velvet. This skin supplies oxygen and nutrients to the growing bone. The velvet has hair, nerves, and blood vessels. On average the antler will grow 0.98 inches a day. Adult bulls’ antlers can grow up to 3.9 feet and weigh more than 40 pounds. When the velvet is on the antlers they do not fight with others. They also eat a lot during this time, about 8.8 pounds to 15.4 pounds a day of food. When the antlers have become fully grown, the velvet dries and peels off. When the velvet peels off they start to fight with other bulls. During this time, they eat less because they are busy fighting, defending, and showing off to the cows how strong they are. Antlers start to grow in the spring and shed in the winter. Usually the antlers do not fall off at the same time. Most often the second will drop 4 to 7 days after casting the first antler. Therefore, you usually will not find both sets. Some shed antlers earlier if they are not nourished enough. Sometimes older bulls will shed their antlers first and it could be because they have used up most of their energy and are worn out. When the antlers fall off, squirrels, mice and rats will chew on the antlers. These antlers are full of nutrition. Elk cows do not have antlers. Caribou are the only deer species in which both females and males have antlers.

The question of why the elk go through this energy consumptive process every year is discussed by the naturalist Michael Ellis of Bay Nature Magazine. In the January 2017 article entitled, Why Do Tule Elk Drop Their Antlers Every Year?  Ellis asks, “But why drop those antlers just to reinvest all that energy the following season? No other mammal can naturally regenerate any lost organ, let alone anything as large and complex as an antler. Scientists have puzzled about this for years and there are several theories but no consensus. Perhaps regrowing gives elk an opportunity to replace antlers that have been damaged. Unlike horns, antlers are brittle, and antler symmetry is important for dominating other males and getting access to females. Also, unlike horns, which grow continually, antlers cannot elongate after they have hardened, so annual regeneration allows them to increase in size as the elk themselves grow in physical size. It could be that antlers are simply an evolutionary accident. It just happens that antlers evolved in the unique lineage of the deer family and horns evolved in a different mammalian line. My personal favorite hypothesis is that males exhausted and emaciated by the breeding season look like healthier females when they do not have antlers, thus throwing off predators hunting weakened males. But frankly we just do not know why tule elk—and other Cervidae—drop their antlers.”

These theories make sense to me. At the end of the rutting season I have observed many bull elk with broken off antlers that are no longer symmetric. Yet every spring they grow new beautifully symmetrical antlers to replace them. The larger the bull, the larger the antlers. What a fascinating process!

As I am observing the wildlife out in the valley, I see the cow elk with their young, some with spots still on them. Their numbers seem to be increasing each year. It is sometimes surprising how far a mother elk will go away from her calf; I have seen a few calves now where I look around for an adult but do not see one in the area. That cow elk is probably watching me from some place she cannot be seen! Spring is turning into summer out in the Willits Valley. As baby ducks and bluebirds, elk calves and deer fawns, young skunks and raccoons, and many others are about with their parents, remember that the products of springtime include the babies of creatures everywhere. It is a lively and busy season for our wildlife and for us too.