The Search for Nesting Spaces 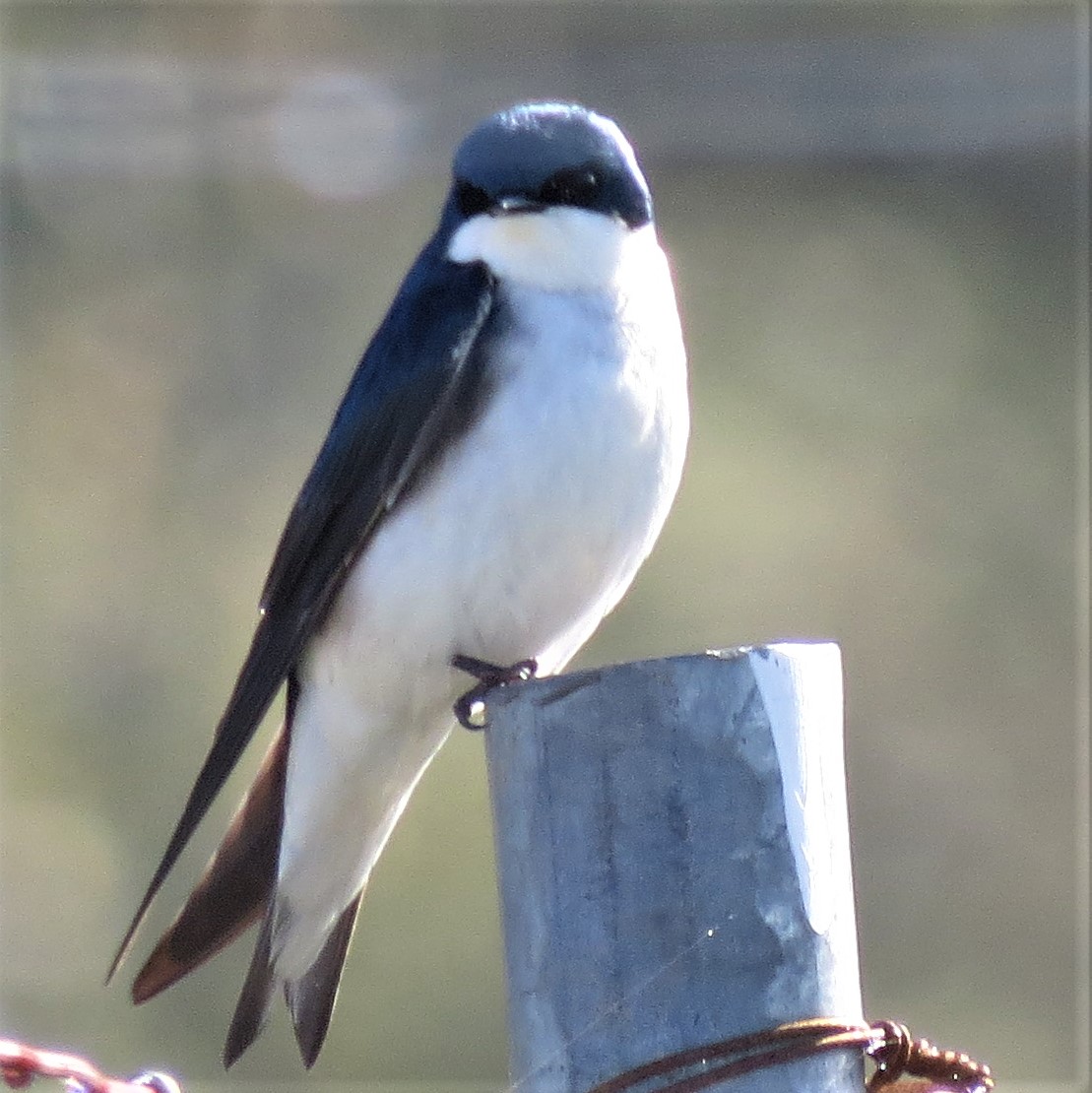 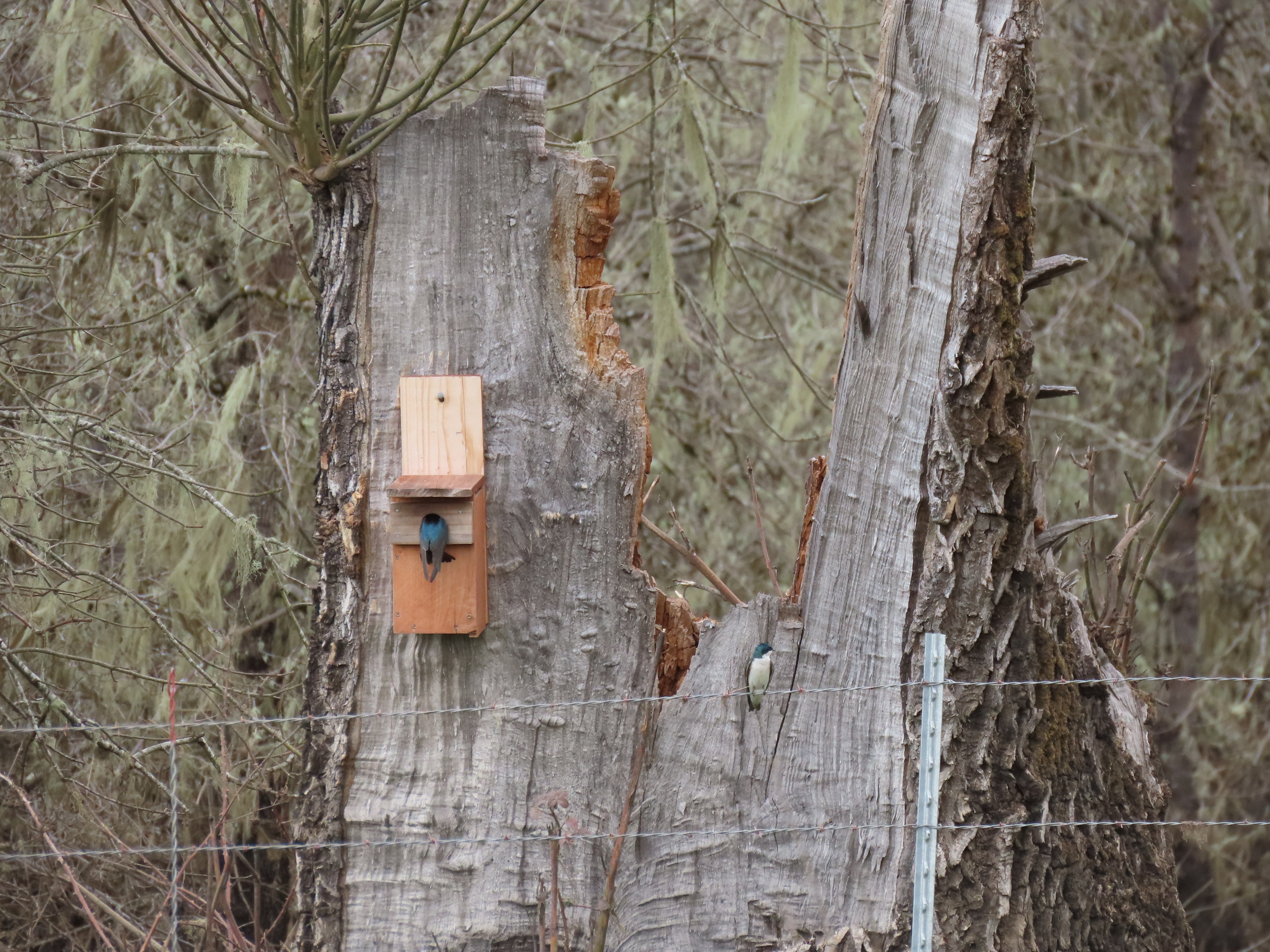 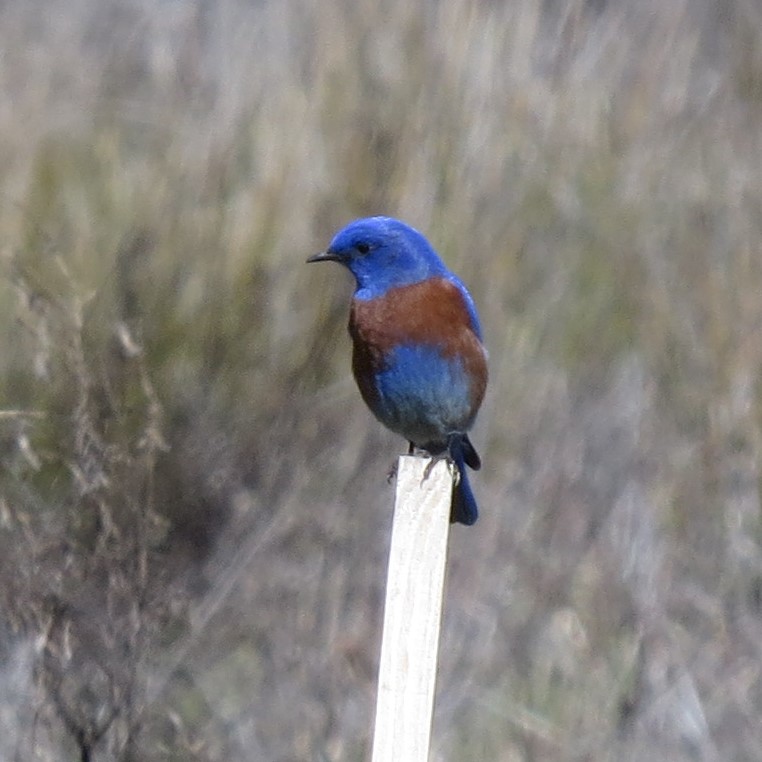 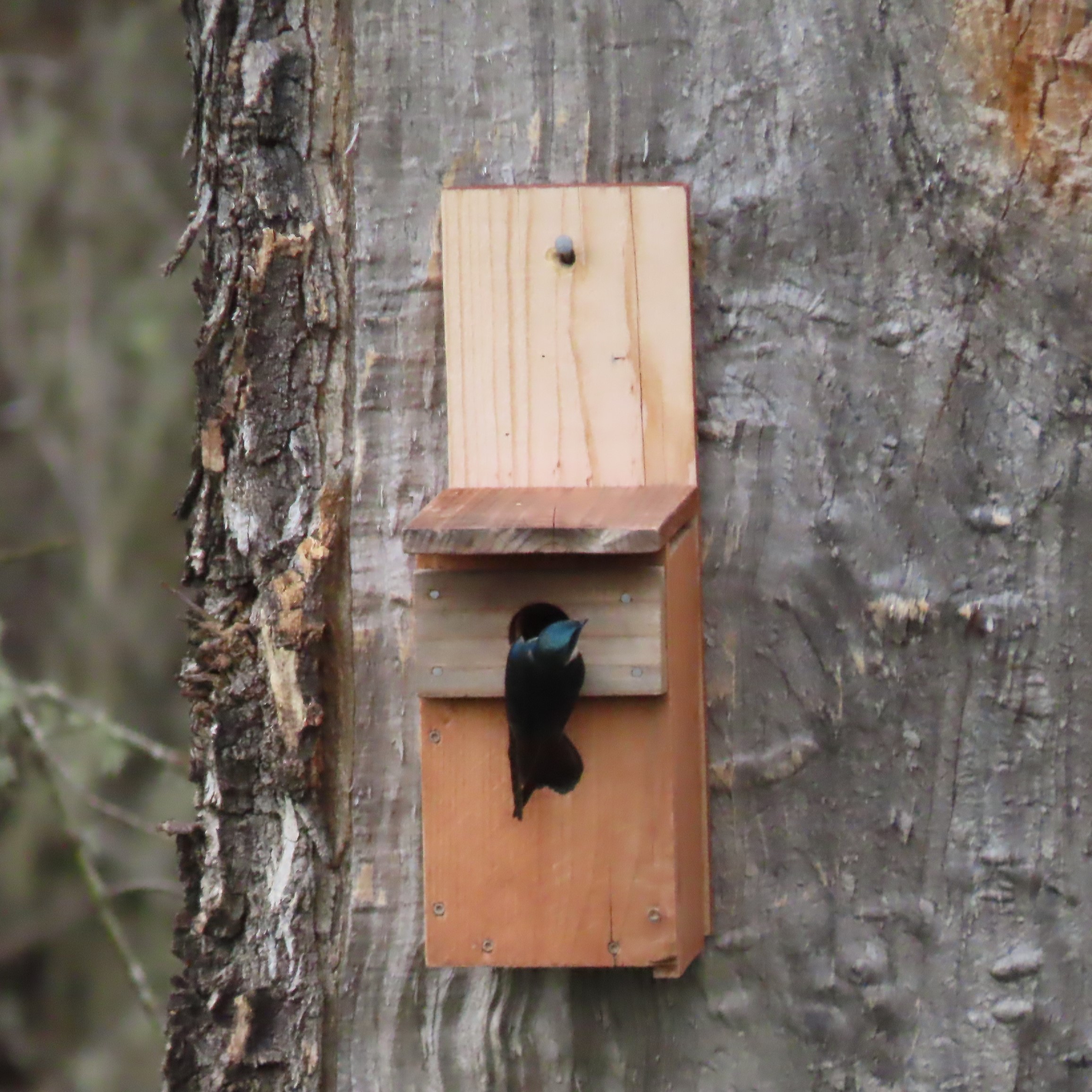 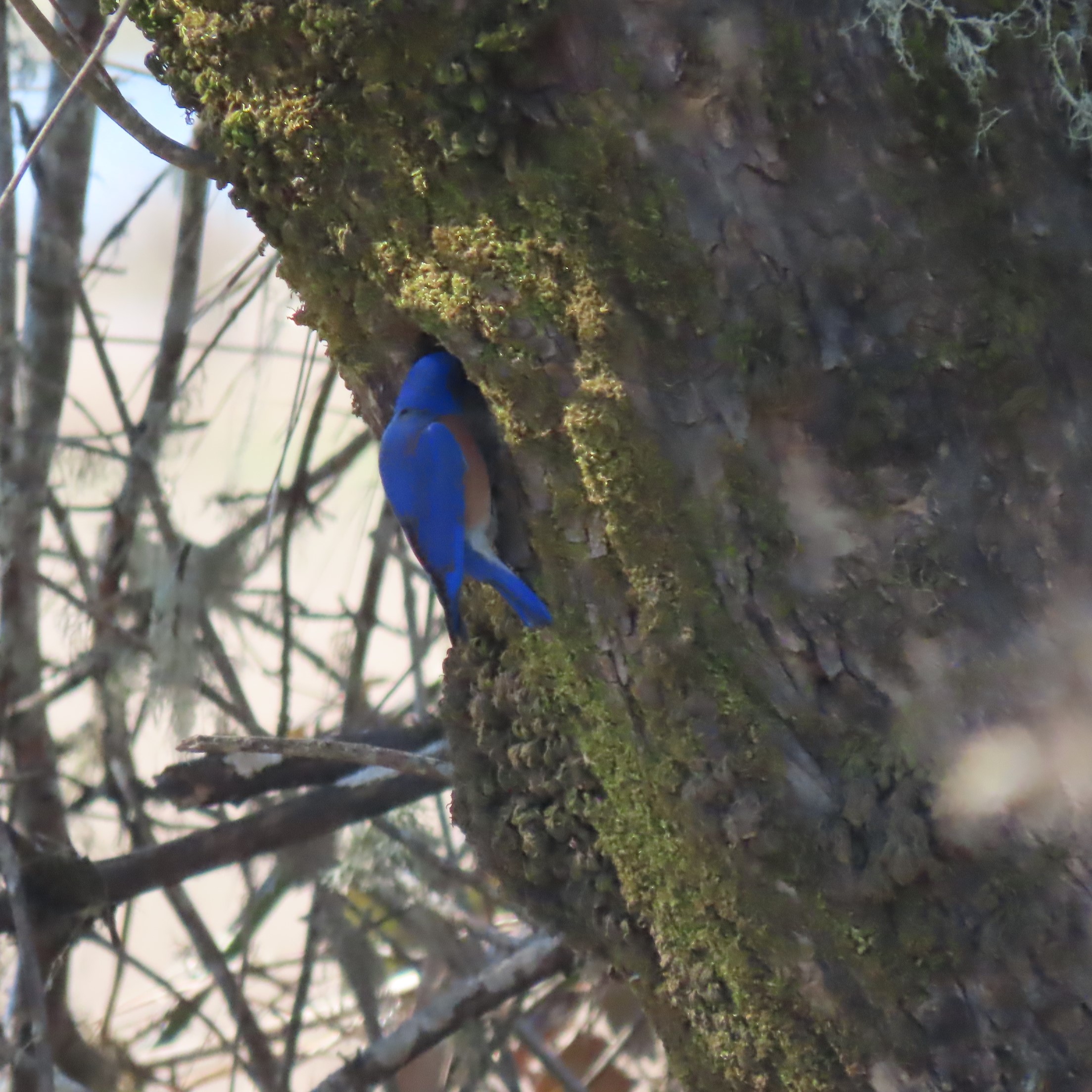 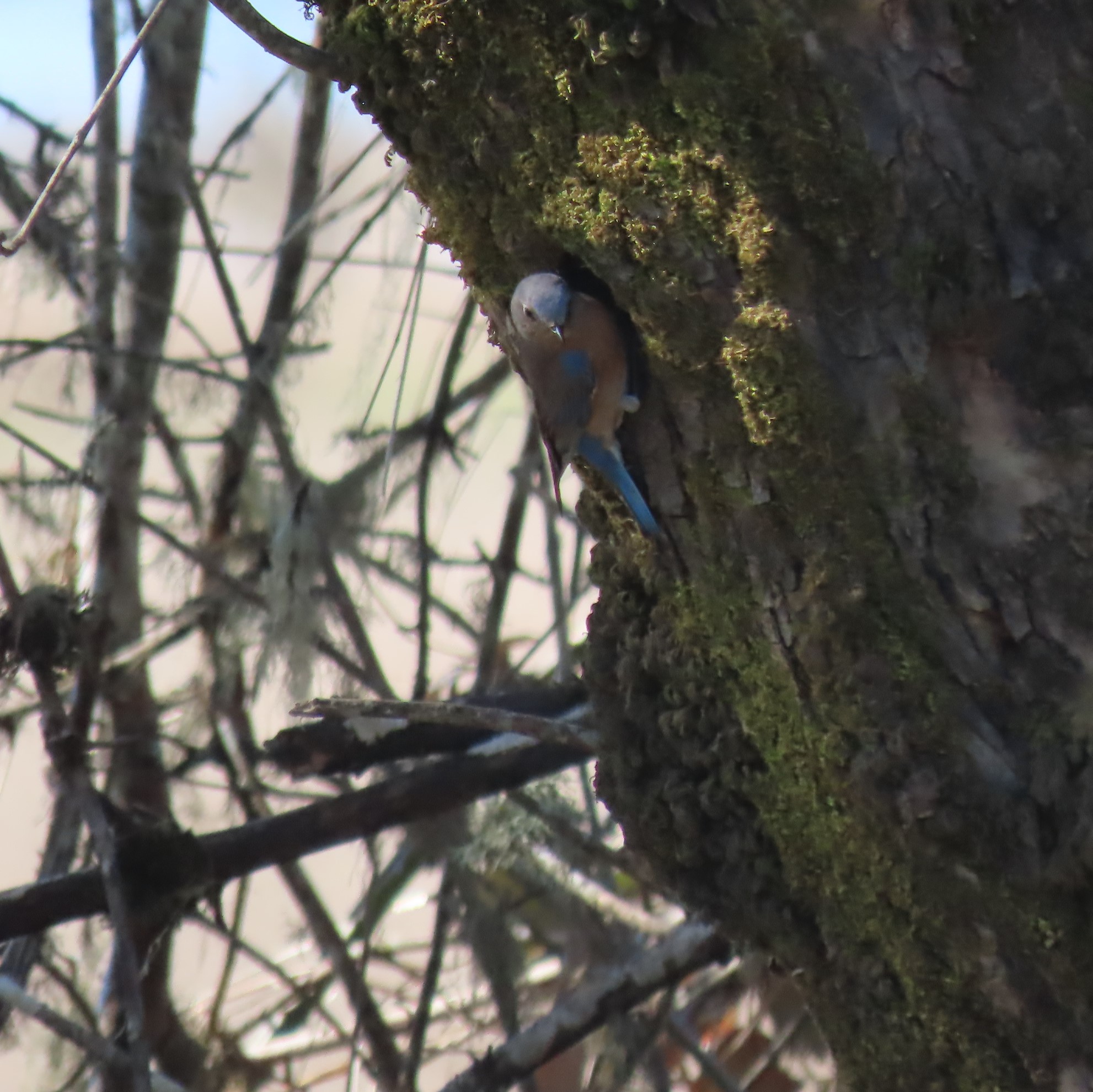 The feel of spring is in the air as I make my way to the north end once again. Today my intention is to observe the nesting behavior of two cavity nesting birds, our year-round resident the Western Bluebird, Sialia mexicana, and one of our migrants, the Tree swallow, Tachycineta bicolor. Tree Swallows winter from North Carolina to the Gulf Coast, and from Southern California to Cuba and Guatemala. They arrive here in March normally but this year I began seeing many of them in January and in February. Unlike other swallows, According to the book, Lives of North American birds, “Tree swallows eat many berries (especially bayberries) allowing them to survive wintry spells when other insect-eaters might starve”. We have hundreds of these beautiful white and blue birds in the wetter areas of the valley. Today they are flying around in groups singing their watery songs as they check out cavities in trees for nesting. I have brought out a nesting box that was repaired to hang up in a spot that was used last year by a pair of these swallows. As I am hanging the box, the swallows are flying around me. I retreat to a spot where I can watch and within minutes there is a male tree swallow checking out the box. He comes back several times before a female shows up to also check out this site

. I am gratified and encouraged to put up more of these nesting boxes when I observe a pair of Western bluebirds checking out a cavity in an Ash tree where last year there was a pair of swallows nesting. I wonder if a fight over this cavity will ensue and resolve to put up another box asap.

Western bluebirds are resident all year here In a previous blog I mentioned that they also eat berries, mostly mistletoe and elderberry in the winter but depend heavily on insects such as grasshoppers, caterpillars, beetles, ants, and more in the spring and summer. They are similar in size and shape to the swallows and a box built for bluebirds will also suit a Tree swallow just fine. I watch as the pair take turns putting their heads and then whole bodies into the cavity, making sweet sounds to each other. I wonder if they are critiquing the size of this hole, or the condition it was left in last year by a pair of swallows! The sky fills with the sound of swallows flying overhead as I head back to my car. This is an important time for many species of animals as they get ready to have their young. As usual, nature has astounded me with its richness and beauty.