The Hum of Pollinators 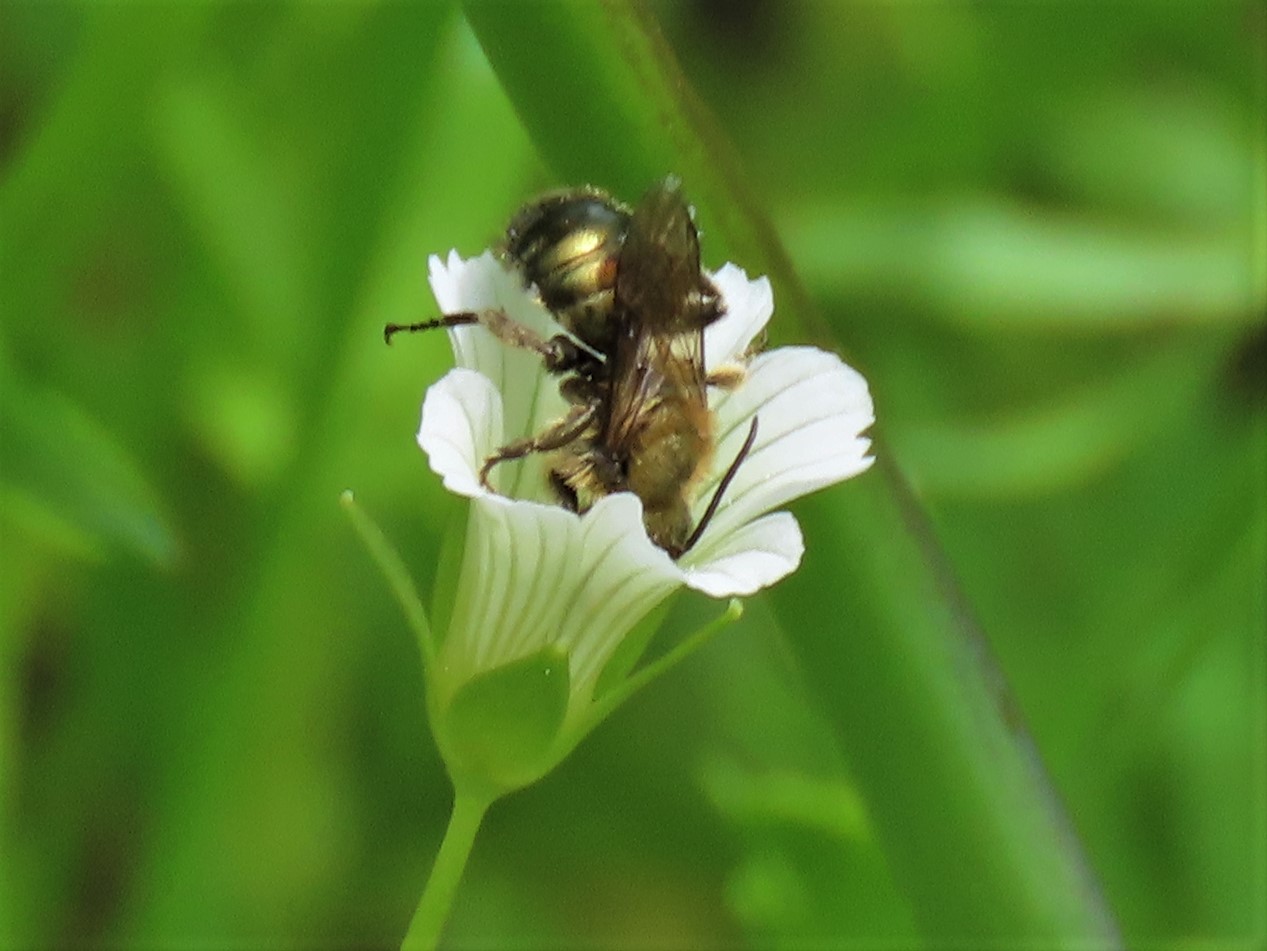 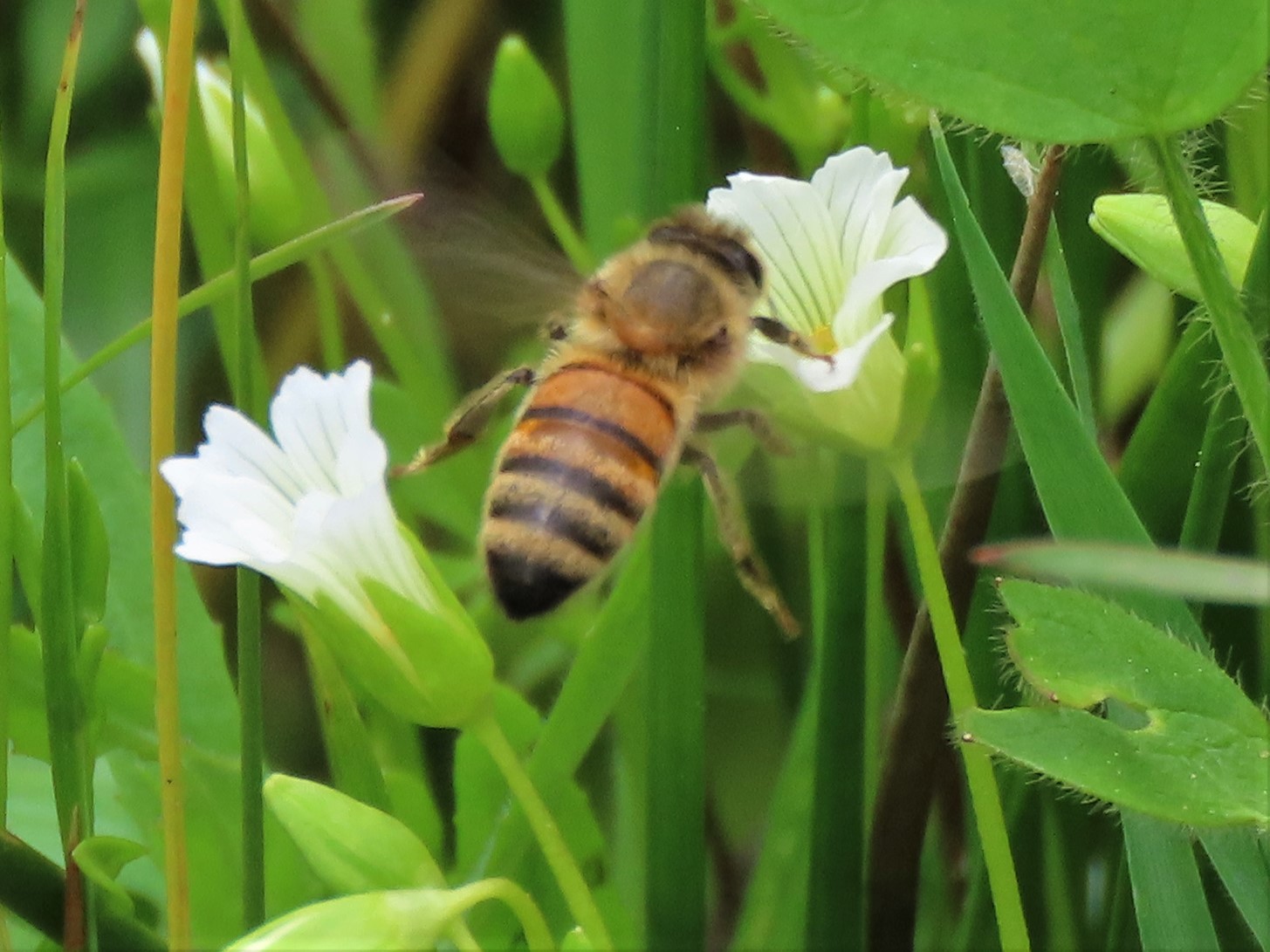 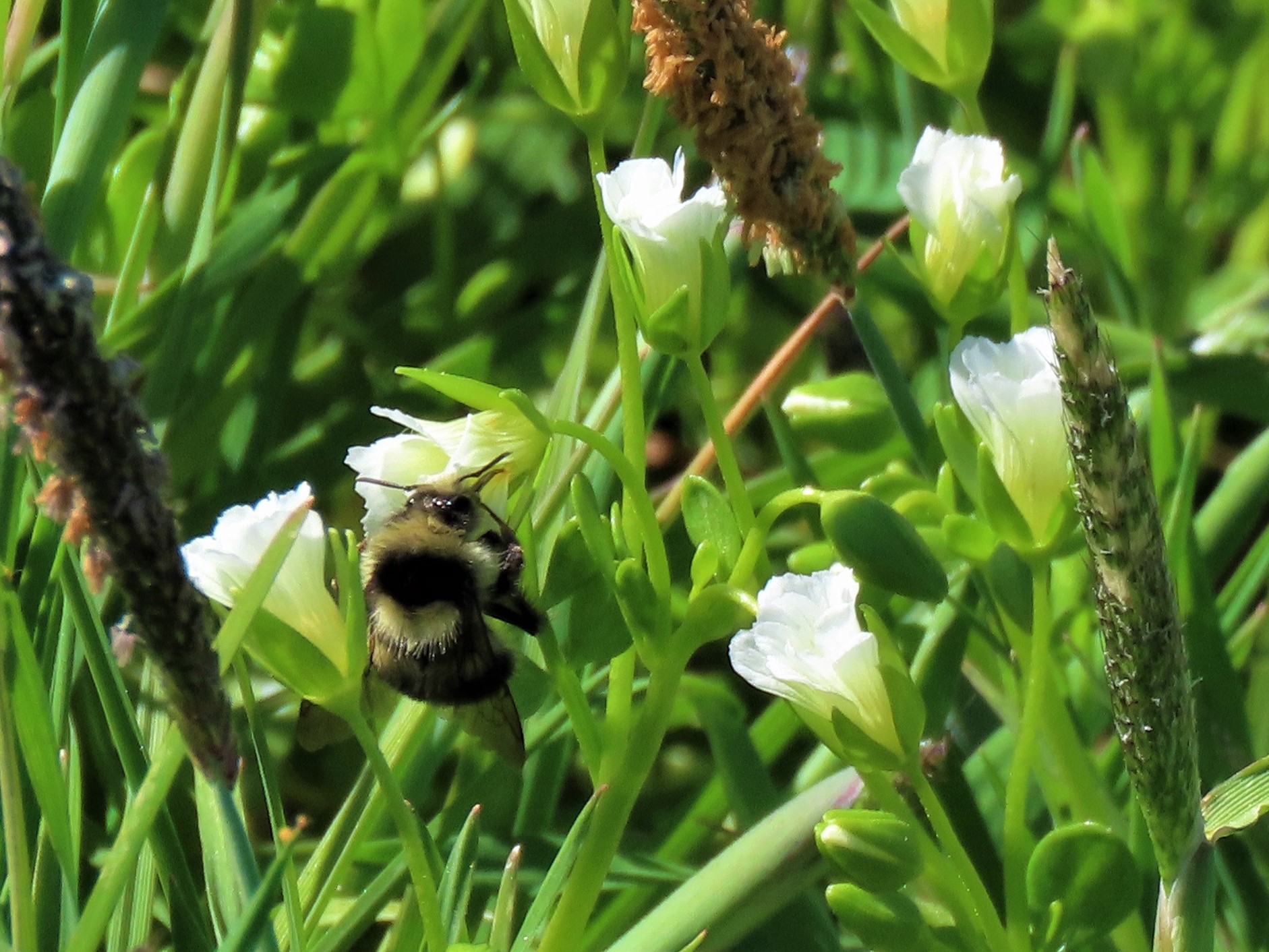 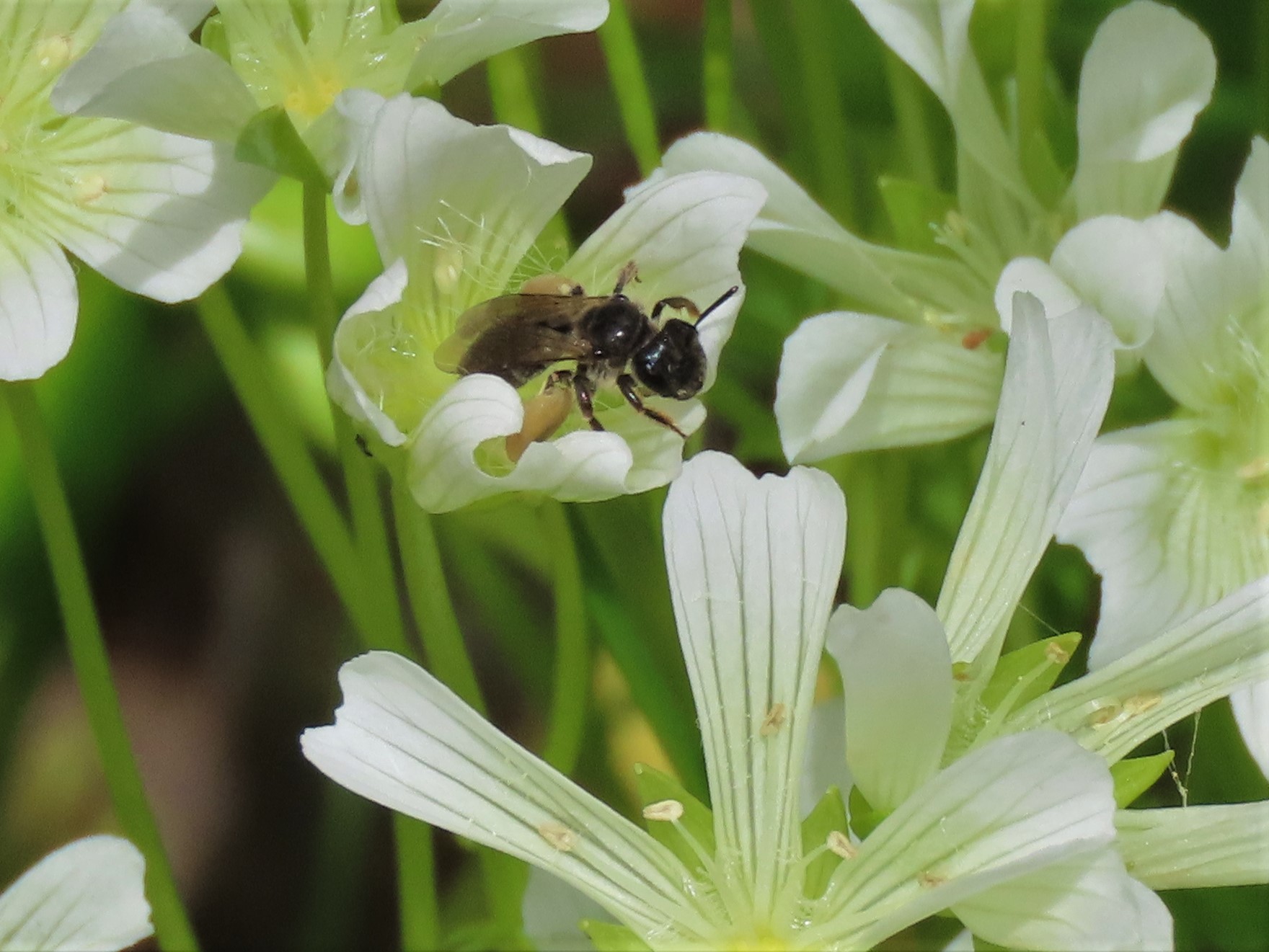 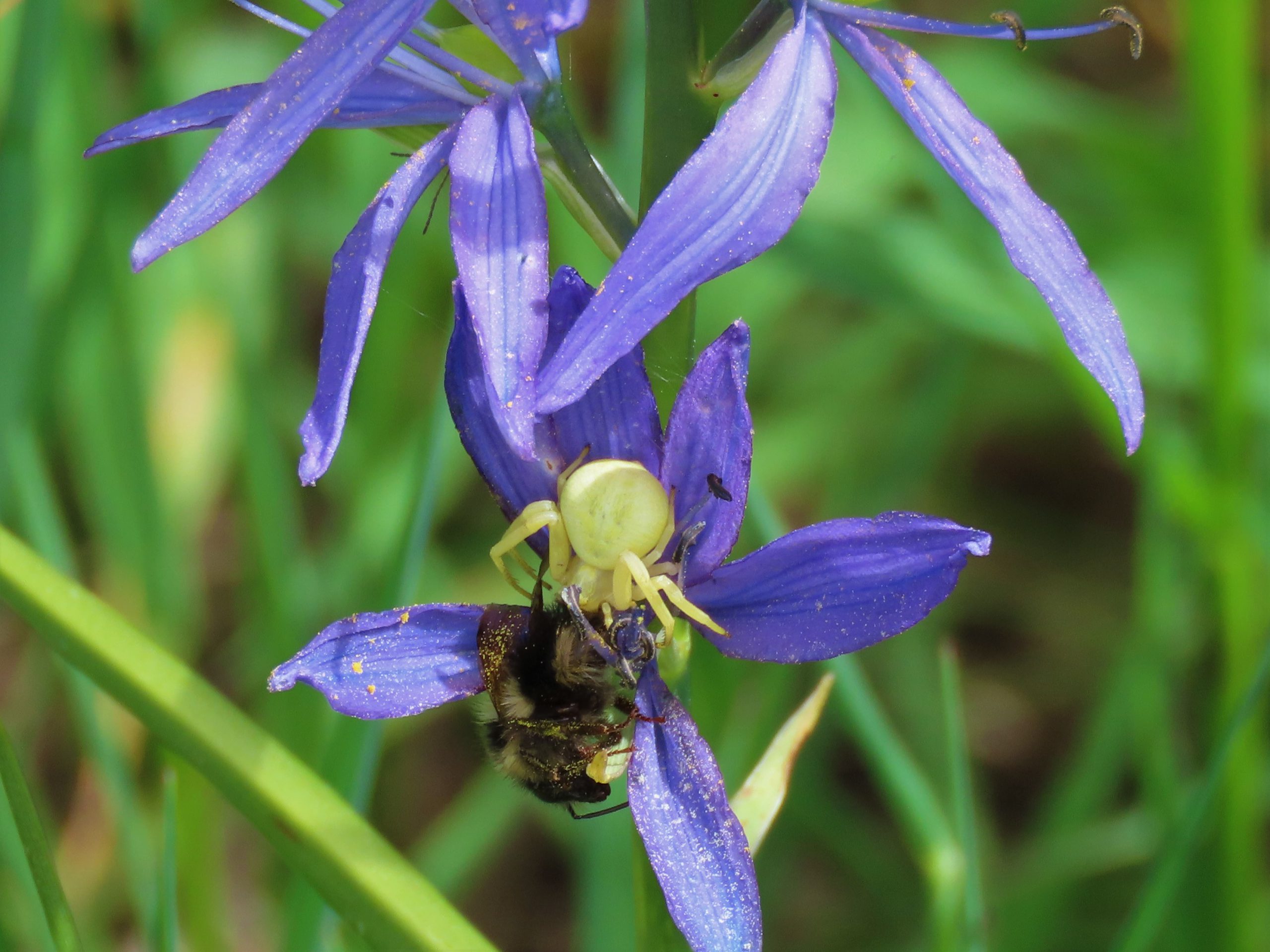 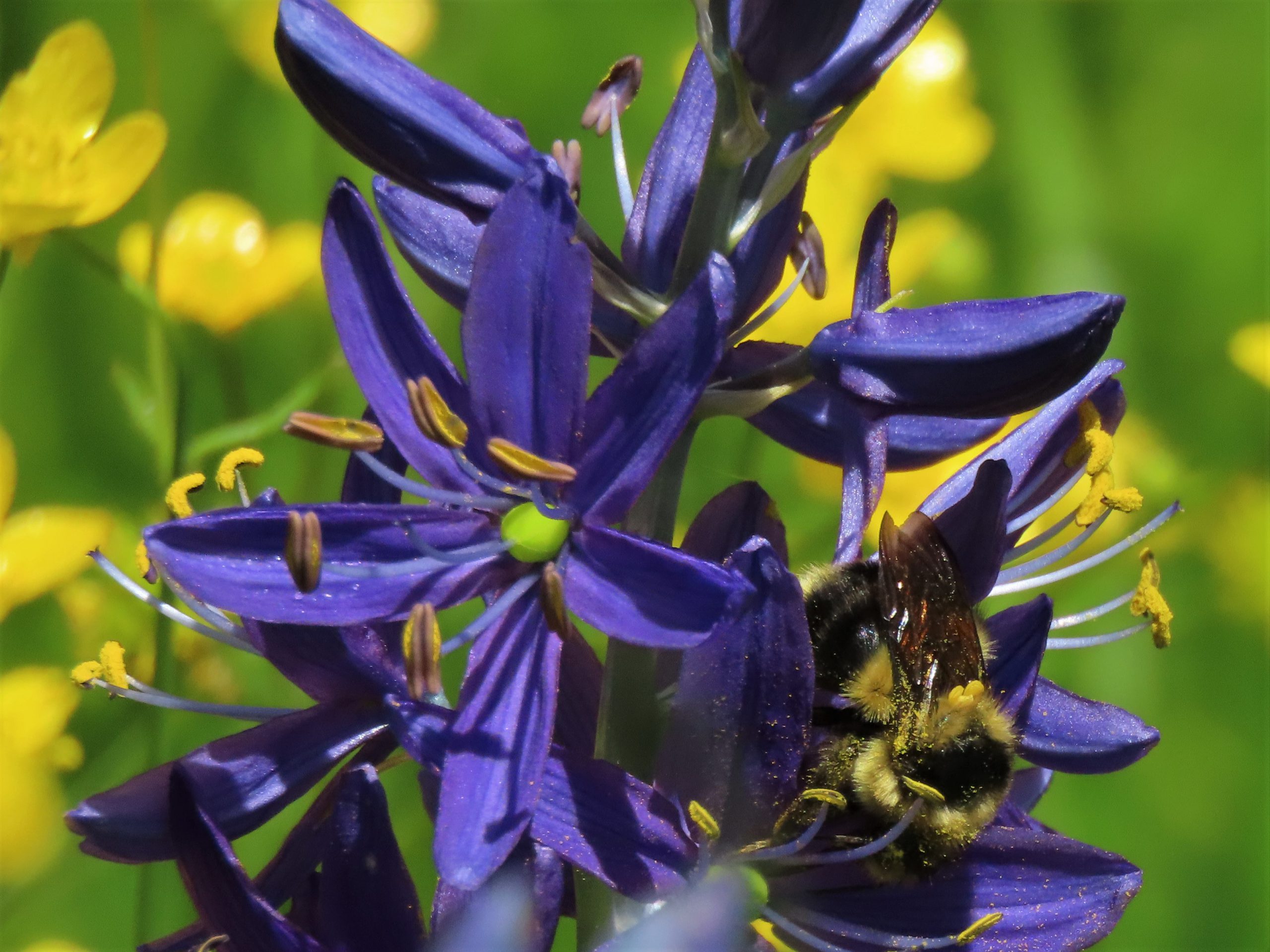 The valley is turning into the “Sea of Blue” that was described by the original group of botanists from Jones and Stokes Associates that came out to do biological assessments of the proposed Caltrans routes for the Willits Bypass in the 1990’s. Their maps had areas designated with that title because of the huge stands of Purple camas that grow in mass on the north end of the valley. The Purple camas, Camassia quamash, is in the lily family and is native to California. It has been grown in gardens not only in the United States but also in Europe. The bulb is used by many Native American tribes in the west as an important food source. It contains complex carbohydrates that after slowly cooking for a long period of time break down to fructose. They can be dried and made into a meal to add to other things.

As I stand in the middle of this “Sea of Blue” there is a sweet smell in the air and the buzzing, happy sound of bees all around me. These are the all-important pollinators, full of bright yellow pollen as they fly from flower to flower. Some are bumble bees, yellow, black, and rounder than the smaller honeybees and slender wasps that are also working these flowers. I also see Umber Skipper butterflies and a Northern Checkerspot butterfly busily pollinating the wildflowers along with a West Coast Lady butterfly landing on a blooming camas!

Pollinators are an important group of creatures. In their 1996 book, The Forgotten Pollinators, Buchmann and Nabhan estimate that animal pollinators are needed for the successful reproduction of 90% of flowering plants and one third of human food crops. Each of us depend on these industrious pollinators to provide us with the wide range of foods we eat. In addition, pollinators are part of the intricate web that supports the biological diversity in natural ecosystems that helps sustain our quality of life.

The black and yellow bumble bee is a species of the genus Bombus. These bees carry pollen on their hind legs and are all very fuzzy. Most have one or more light colored bands on their thorax and/or abdomen. Camas plants are found in many wet meadow habitats from coastal areas to the mountains in the west. Another plant on the project that attracts pollinators with its small white flowers is Baker’s Meadowfoam, Limnanthes bakeri. It is one of the Willits mitigation lands endangered plants and is listed as a rare plant rank 1.B by the California Native Plant Society. Our valley has the largest population of this diminutive plant and we manage it to ensure its survival. It requires specific soil conditions as it is listed as an obligate wetland species. Limnanthes douglasii is another common meadowfoam species with larger white flowers that grows in many of our ditches along the roads. This plant also occurs in the wet valley meadows and its delightful sweet aroma can sometimes fill the air.

Two specific pollinator species have a mutualistic relationship with their host plant, Baker’s meadowfoam. These pollinators and meadowfoam have evolved together over many centuries. The first photo shows Andrena pulverea, a small metallic-looking bee that can fit most of its body into the tiny flower. The second photo is Panurginus occidentalis, which is the other important pollinator for this plant. There were also many Bombus spp. and small mason bees, Osmia sp., gathering and transporting pollen on their abdomens.

Pollinators have their predators too and I happened upon one of them while looking closely at the camas flowers. It was using camouflage to hide itself in the stamen (the pollen bearing male part of the flower) since it is bright yellow. A Crab spider was making a meal out of one of the bumblebees visiting the Purple camas! It is a world within a world to watch pollinators go about their busy lives, carrying one plant’s pollen to another, allowing genetic diversification and ensuring the survival of these flowers.