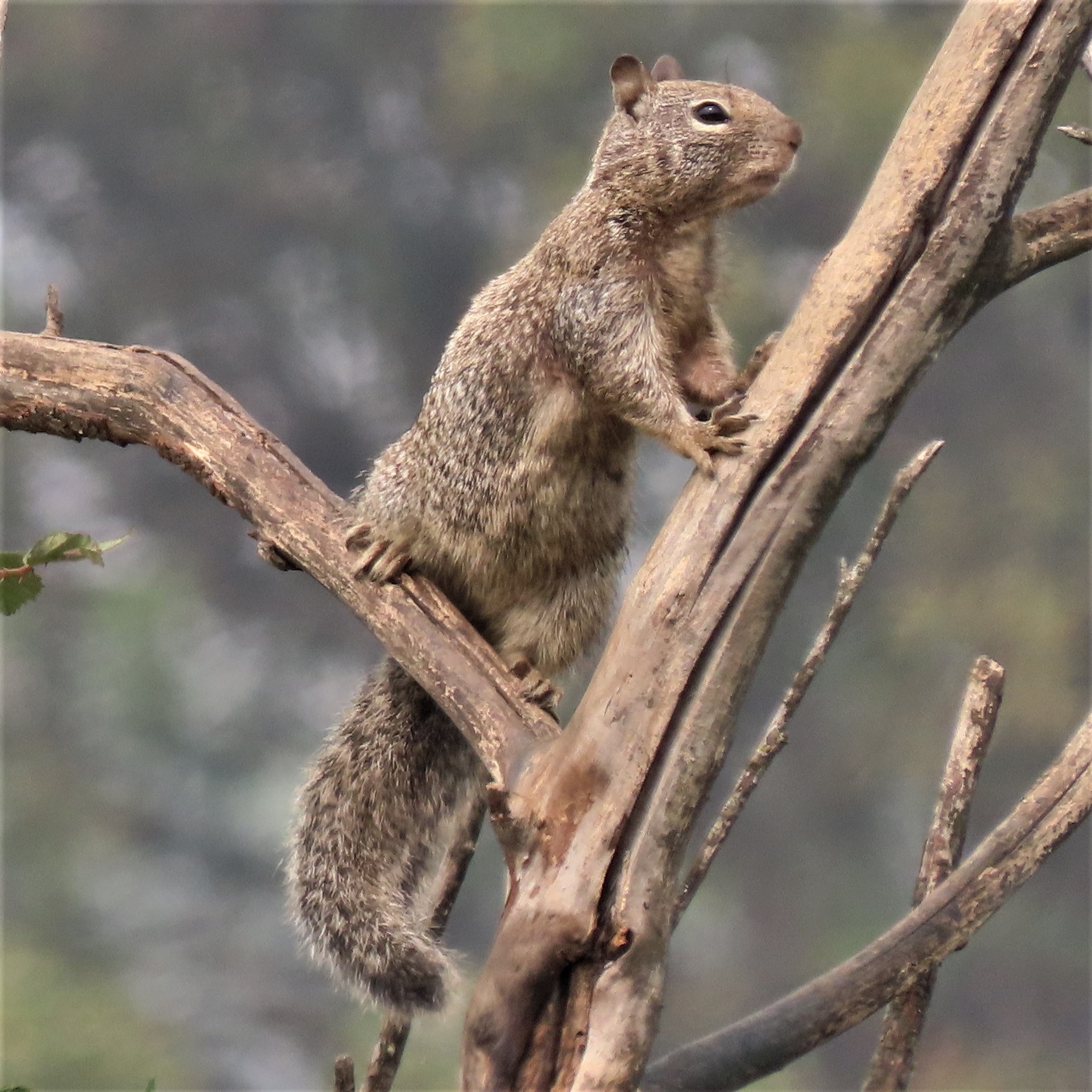 A California ground squirrel on the lookout on one of our smoky days. 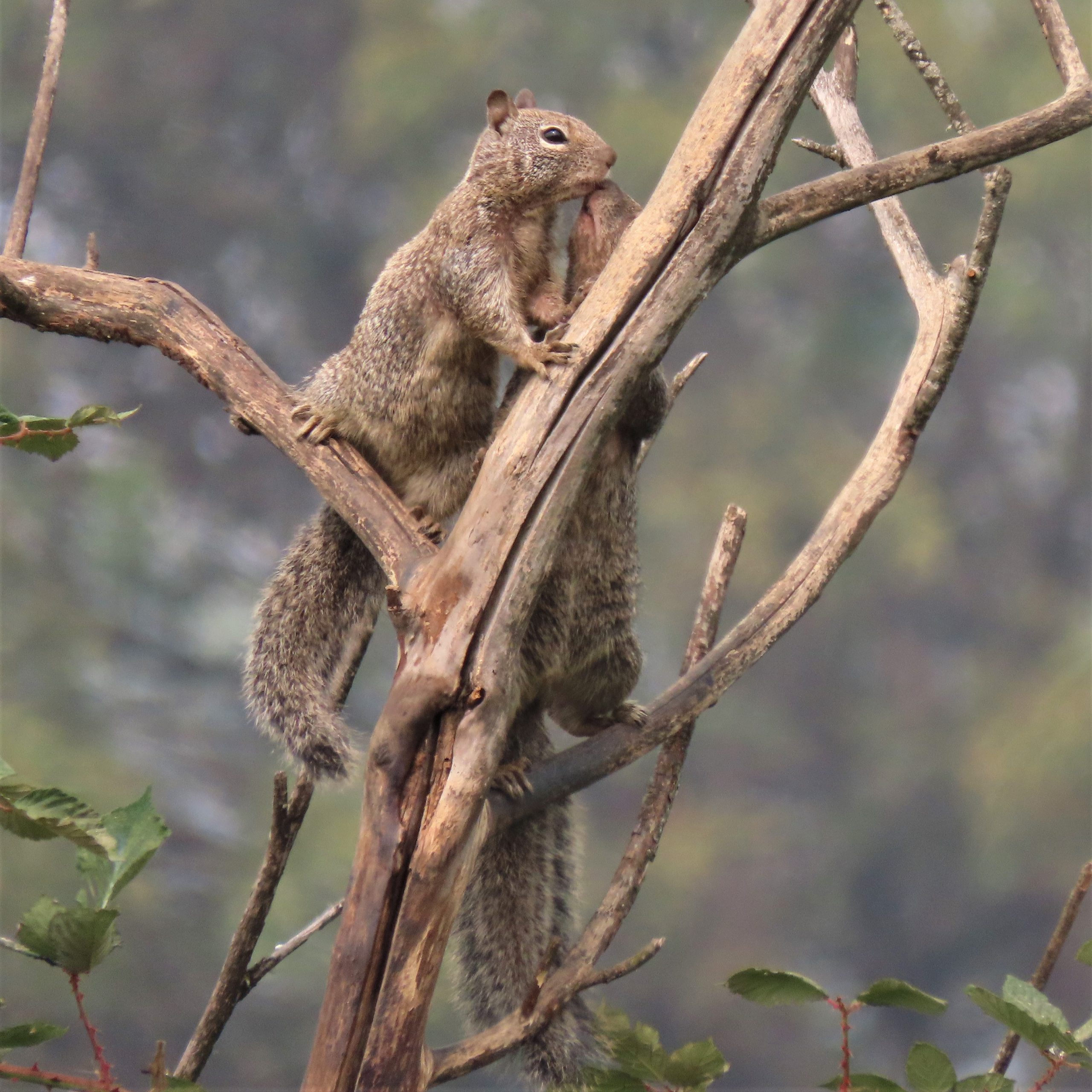 A quick nose kiss to acknowledge the lookout Ground squirrel. 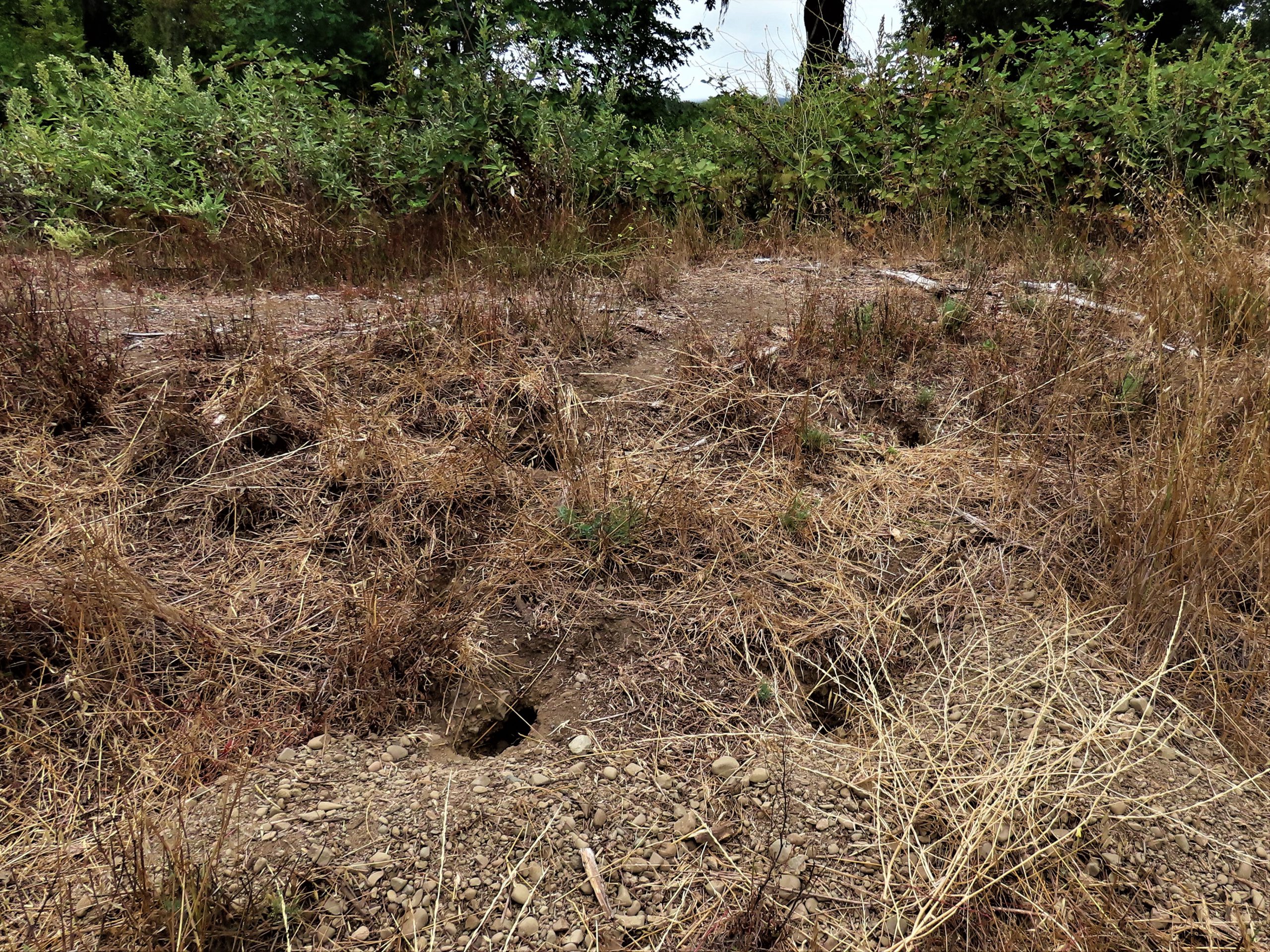 A colony of ground squirrels live in this hillside. 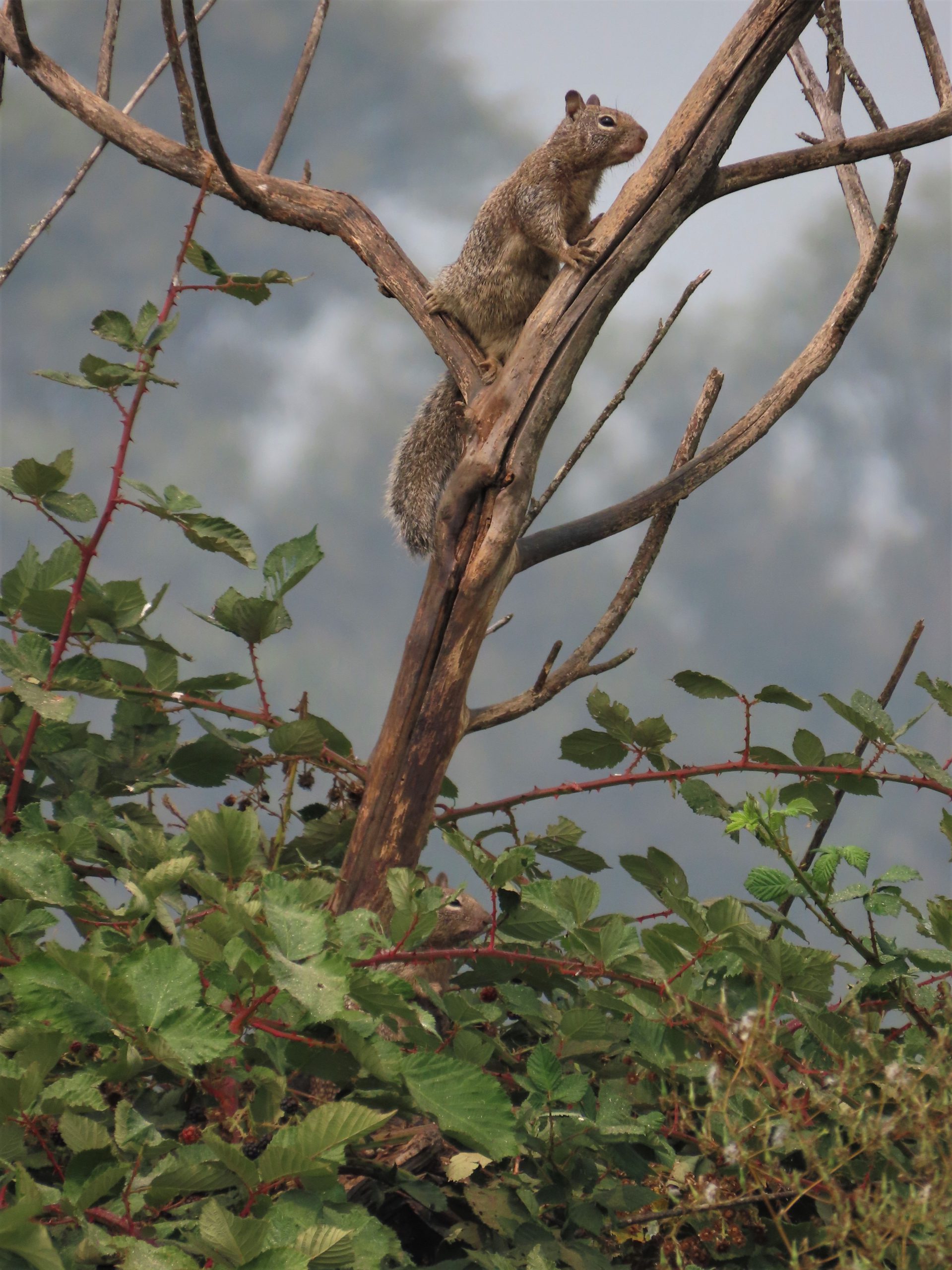 Look carefully and you will see a second Ground squirrel coming to look. 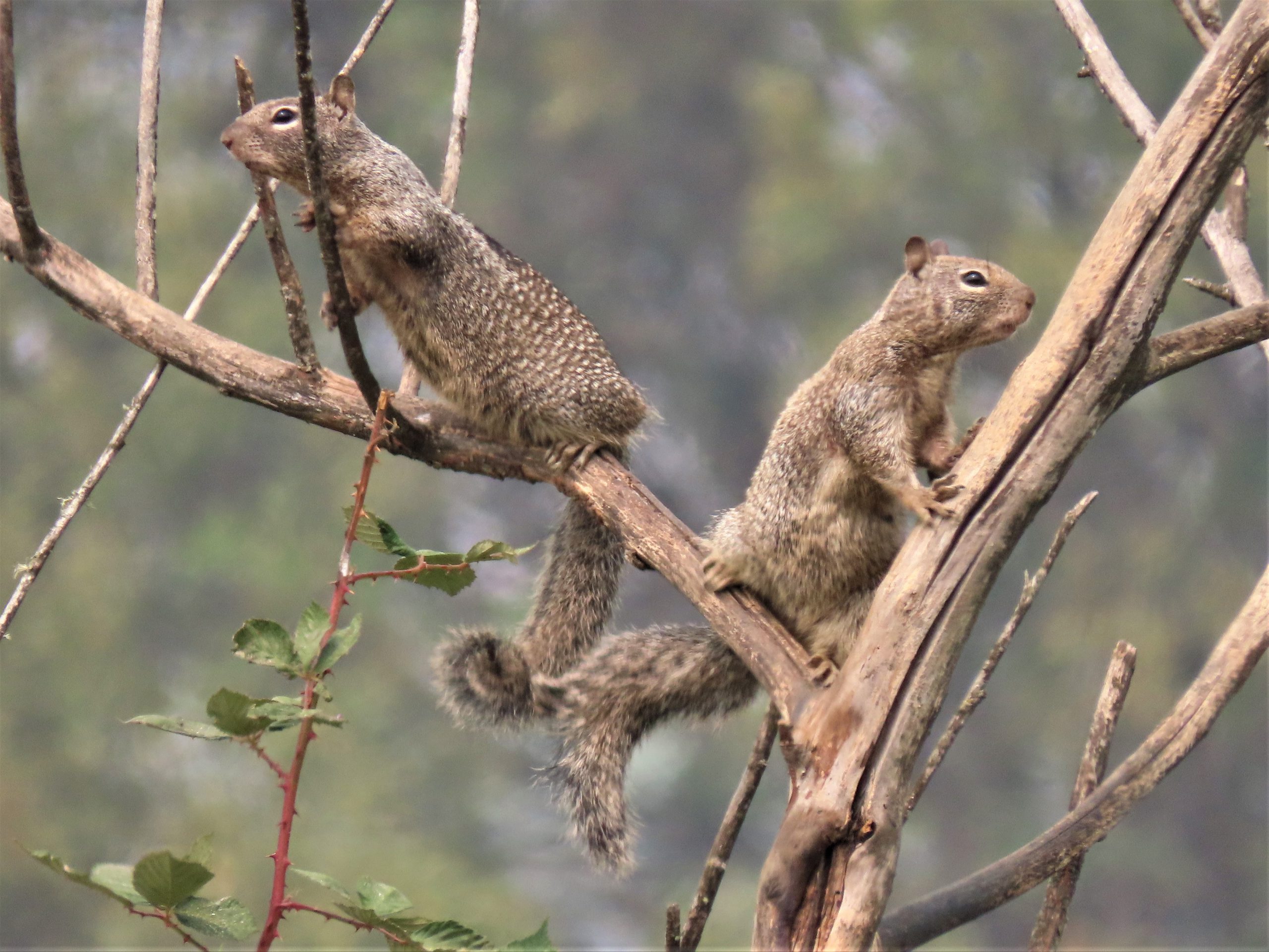 Both of the Ground squirrels looking out for any dangers. 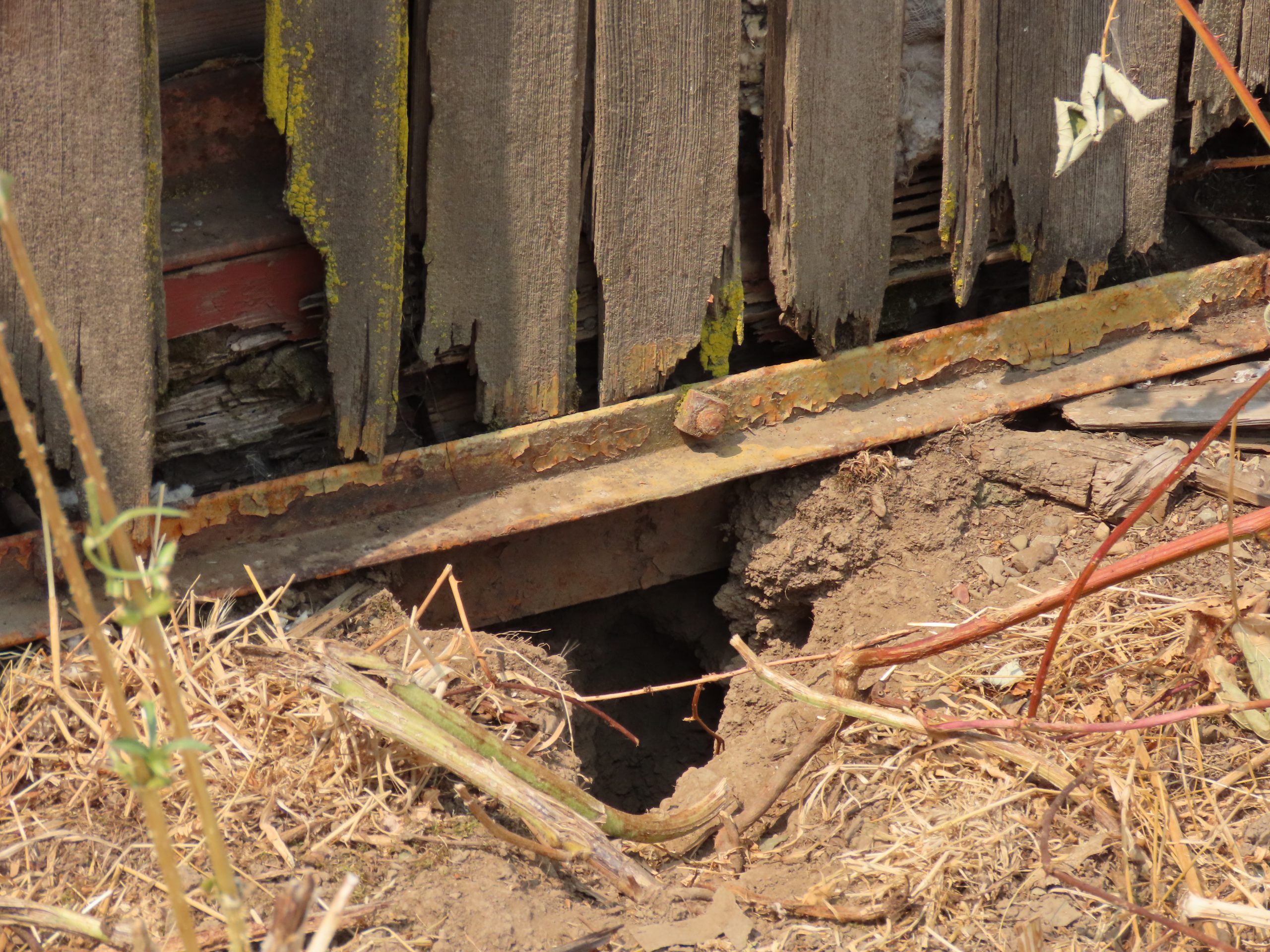 A different Ground squirrel colony under an old railroad car.

The smoke and haze make photography difficult but today does not seem as bad as it has been, so with my mask on, out I go to find where the California ground squirrels are living in the valley. In the past three years I have only caught a glimpse of one or two of these wonderful “living fossils” and “important engineers of the grasslands” as Kate Marianchild, in her informative and delightful book, Secrets of the Oak Woodlands, states.

The California ground squirrel, Otospermophilus beecheyi, (also called the Beechey ground squirrel or digger squirrel), are the most common ground squirrel in California, though in the Little Lake Valley I seldom see them. It is a squirrel seen on our coastal trails and on the grassy hillsides and oak savannahs of our valleys. Remnants of their ancestral forebearers (squirrels with skulls very similar to them) were found in California fossil beds and aged at 10 to 12 million years old.

This squirrel is a mixture of gray, light brown, and black mottling with a whitish 3 cornered silvery white patch on each shoulder. Their bellies are lighter, almost a buffy yellow color, with white around their eyes. Their tails are quite bushy and full.

Usually I am alerted to their presence by their high-pitched alarm calls and just see their retreating hind ends disappearing into a burrow or hole under some structure, like the Davis Creek bridge or the old railroad car on the Watson site. They are considered a “fossorial” species which means they live in burrows during much of the day but are surface dwelling otherwise.

Ms. Marianchild states that “their colonies can include up to several dozen squirrels of multiple generations sharing their nest complexes, each with his or her private entrance, while other squirrels live by themselves in private burrows. The labyrinth of tunnels can descend six feet underground and run horizontally up to thirty-five feet.”  As I look at the small colony on Davis Creek, I wonder how far these tunnels go and how many individuals are part of this colony.

These ground squirrels are an important food source for golden eagles who depend on them for up to 70% of their diet. Red-tailed hawks, coyotes, bobcats, and mountain lions also predate on ground squirrels. Again, according to Ms. Marianchild, “They sustain not only predators, but also entire ecosystems. They loosen and aerate soil and bring seeds to the surface, contributing to plant growth and diversity… They provide “pre-dug” dens and nests for owls, foxes, coyotes, who often appropriate and remodel their burrows. They also play host to uninvited lodgers, including ensatina salamanders, western toads, and two threatened amphibians, the California red-legged frog and the California tiger salamander.” Other rodents use their tunnels to hide from predators and to raid the food stored there.

Another interesting thing about the Beechey Ground squirrel is that it has evolved with rattlesnakes in a type of “coevolutionary arms race,” where some populations of California ground squirrels have varying levels of resistance to rattlesnake venom. Female squirrels with pups also chew on the skins shed by rattlesnakes and then lick themselves and their pups (who are not resistant to venom before one month of age) to disguise their scent. We have not seen any rattlesnakes in the valley, though there are historical accounts from ranchers who have seen them.

As I walk along on the west side of Davis Creek, I hear the familiar alarm call of the California ground squirrel. Looking around I am treated to the sight of one of these vigilant rodents up on a small dead tree. It is staring straight at me, assessing whether I am a foe or a friend. Another squirrel joins in to look, first nosing a greeting to the first one, before stretching out on an adjoining snag. These California ground squirrels are a keystone species of grasslands, savannas, and oak woodland edges, playing an important role in a healthy ecosystem. It is a delight to see them.

If you would like to find out more about California ground squirrels in the book, Secrets of the Oak Woodlands go to www.katemarianchild.com