Some of Our Pacific Flyway Raptors 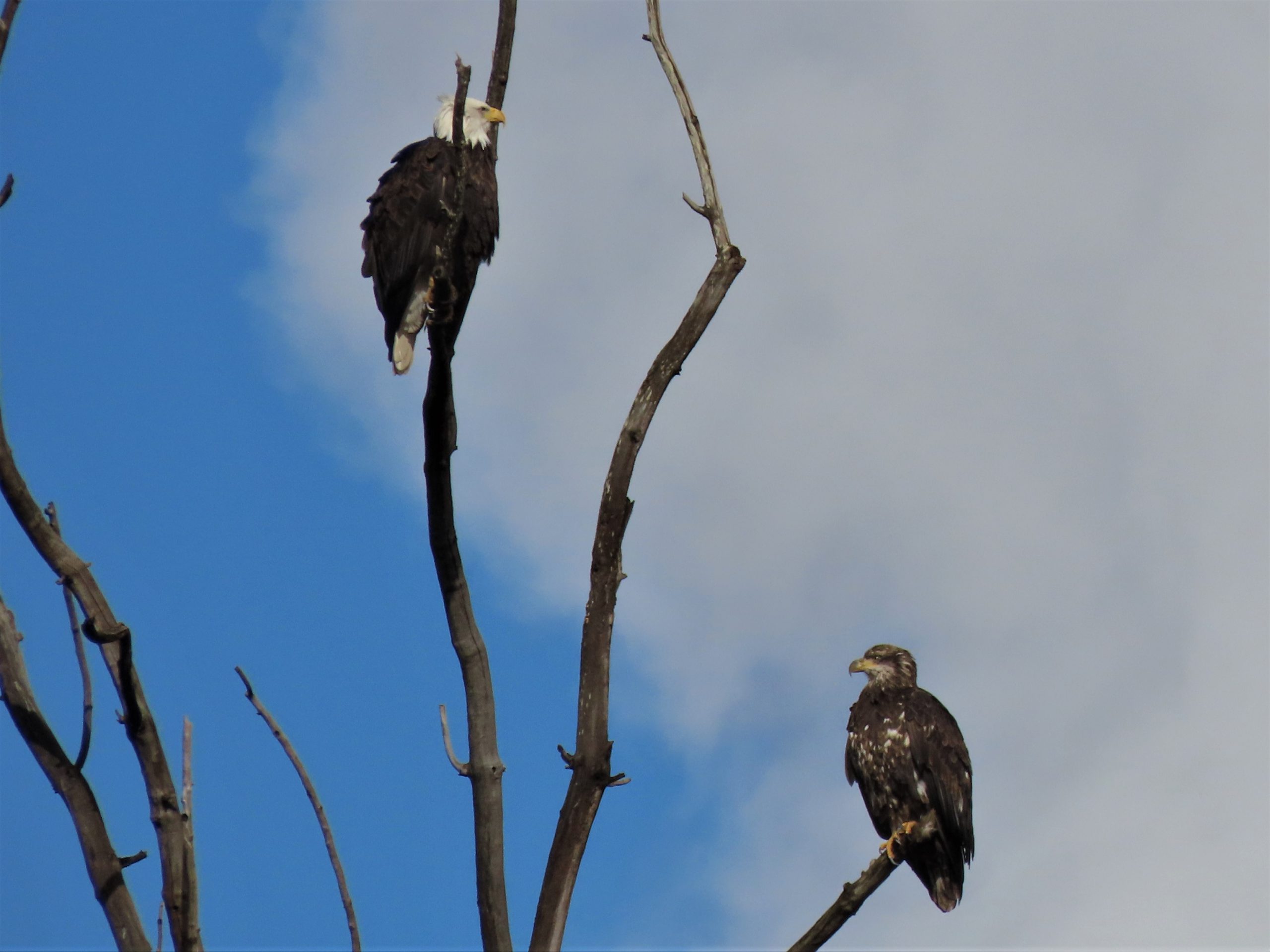 An adult bald eagle and a first year immature bald eagle looking over the Willits Sewage Treatment Plant ponds from the Mitigation lands. 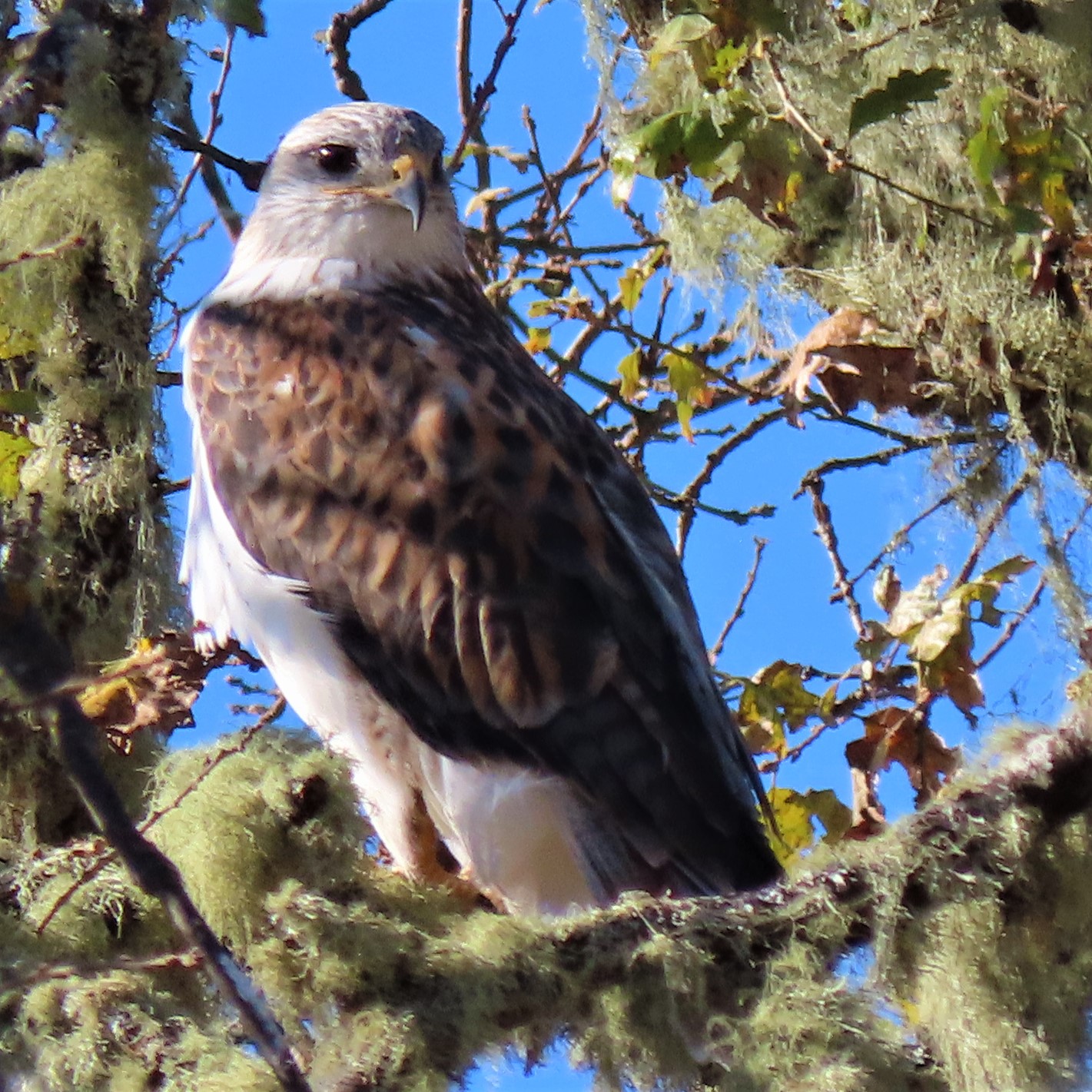 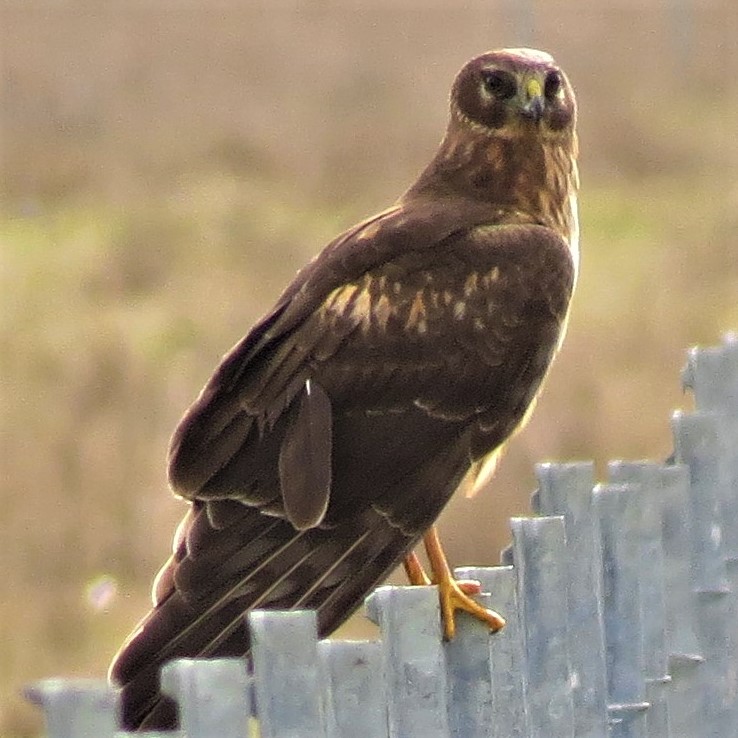 The Northern Harrier is one of our Pacific Flyway migrants that we see during both the spring migration times from February to May and then the fall migration times which is from August thru December. We do have a resident breeding population along our coast but not on the Willits Bypass Mitigation Lands. 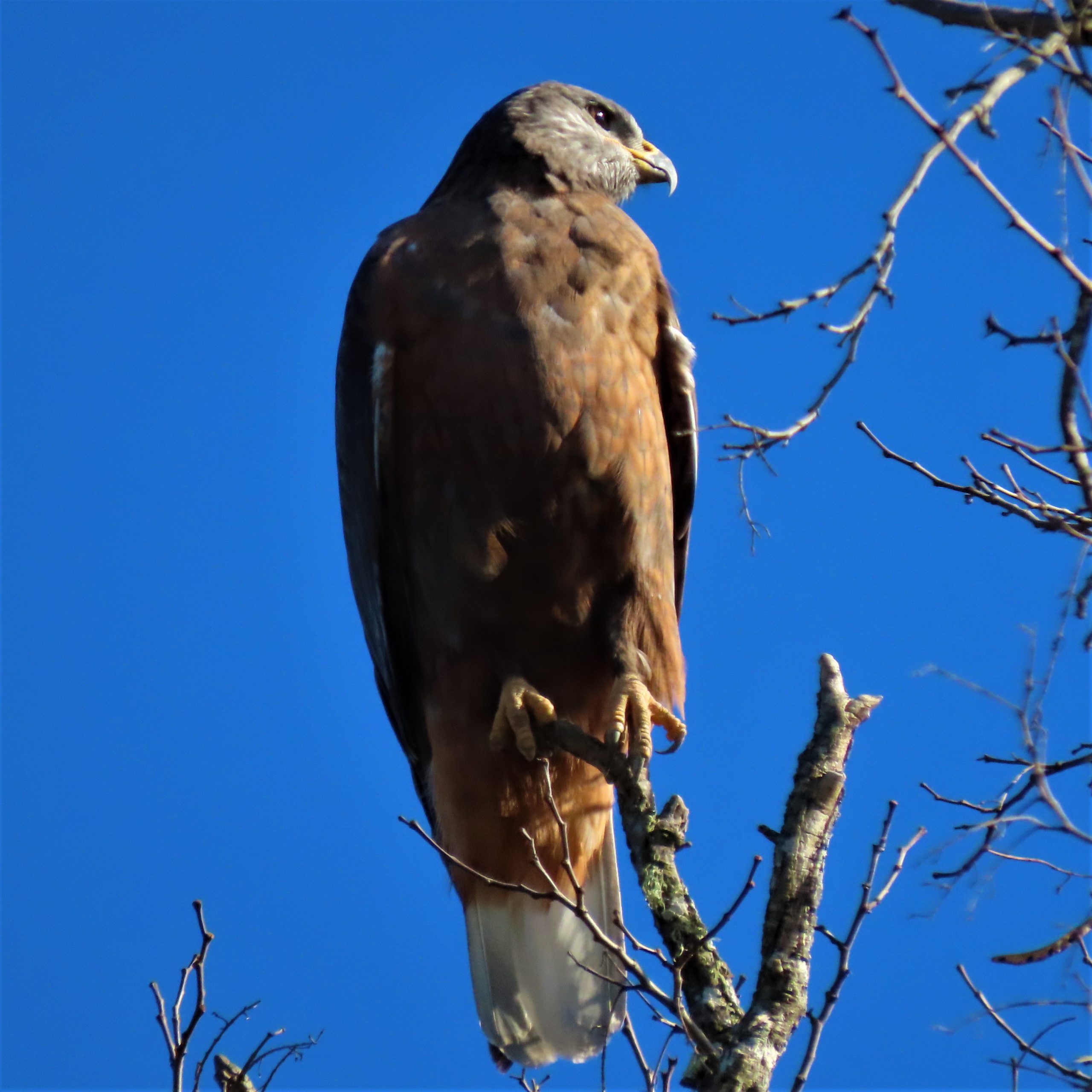 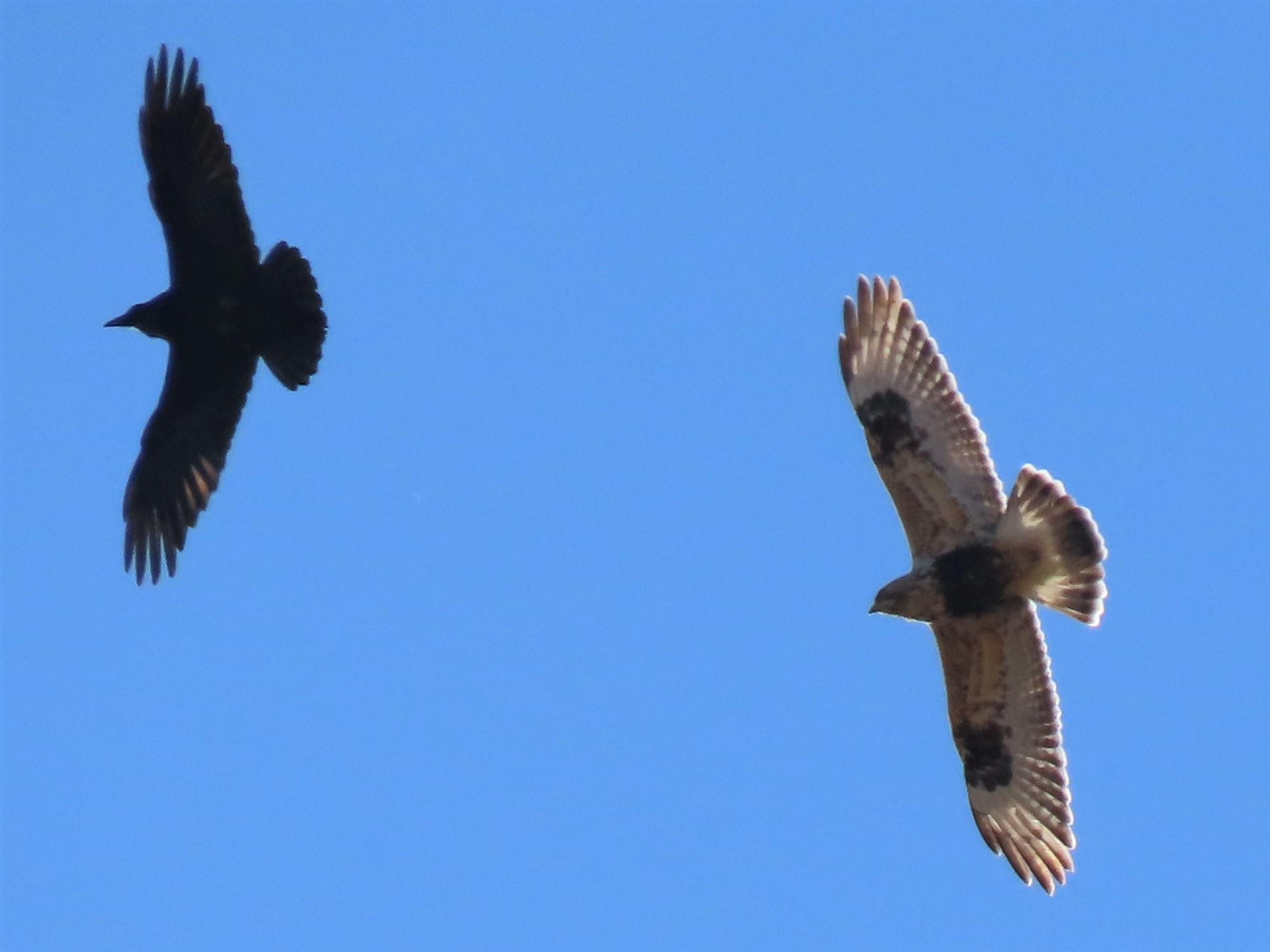 A immature Rough legged hawk flying with a Common raven 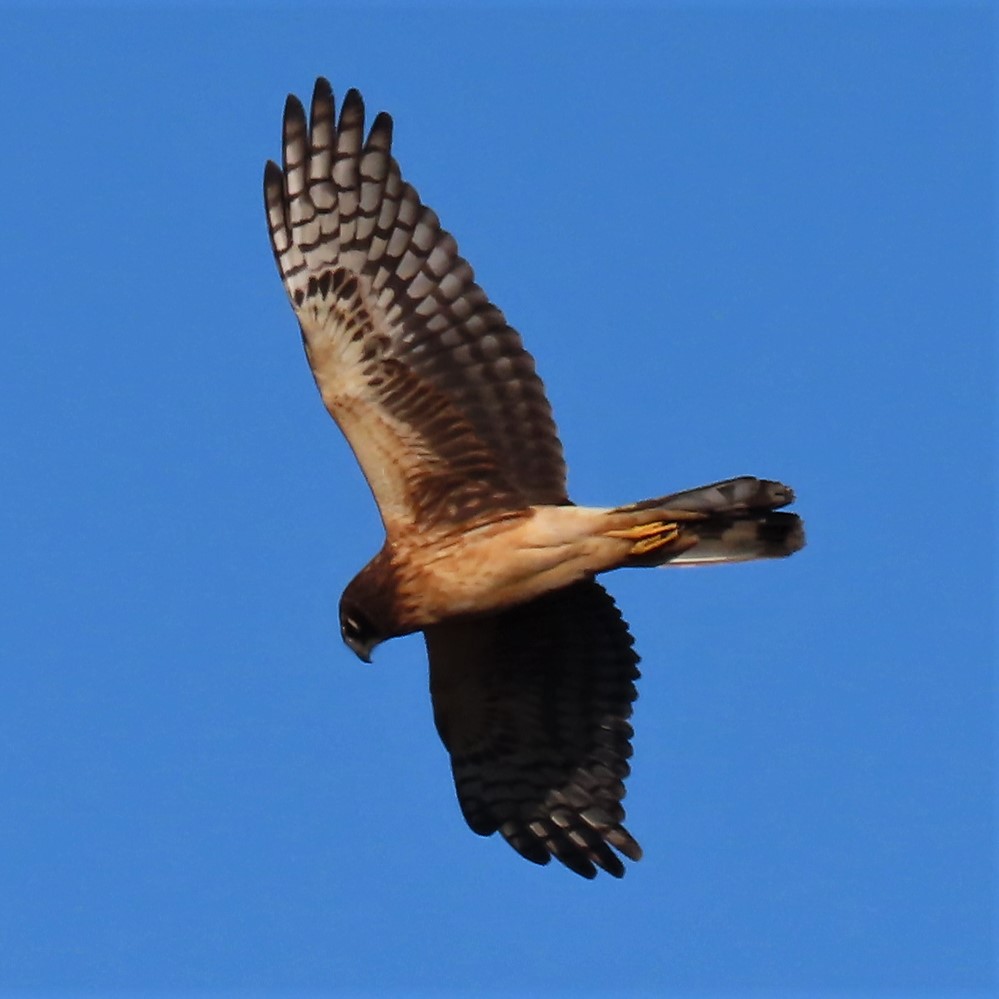 This is an immature Northern Harrier as told by its relatively unstreaked chest and cinnamon coloring with banding on the tail.

The much-needed rain last week is now just a memory. The dry and cold has returned, but the creeks are running full of water, benefitting the wildlife that have been holding on through that hot dry summer we had. The fire danger has diminished which is a relief to us all. With the colder, wetter weather, our Pacific Flyway migrants have begun to arrive. They are coming from not only the northern tundra areas of Alaska but also east west from the Rockies to the Pacific coast. The National Audubon Society states that over one billion birds use this flyway during the fall migration and then again during the spring migration, though unfortunately this is greatly reduced from the amount that previously used it!

The raptors that we begin to see arriving in August and through the winter in greater numbers are some of those migrants. Raptors such as Northern Harriers and Ferruginous Hawks leave their nesting sites in the high plains of Nebraska, Idaho, and the tundra areas as the cold and snowstorms move in. They either come through the California coastal areas on their way to Central America or even all the way to Argentina or stay in our valleys for the winter. Here the weather is much milder, and the landscape is similar to the wide-open plains. In addition, there are reliable food sources for them.

The variety and number of raptors is what makes this time exciting. I never know what I will see sitting on top of some tree or post or even on the ground hunting. Today there are five Redtail hawks in the area where I am walking. Some of these are probably resident birds that live here, and some may be migrants moving south from northern areas. The next birds I see soaring are three Bald Eagles, one adult and two juvenile birds. I am only able to photograph two of them that have landed on a bare cottonwood tree overlooking the Willits Wastewater Treatment Plant. These birds could have just arrived here from Alaska or further north. They are eyeing all the waterfowl floating around on the ponds.

As I continue to walk along Outlet Creek, a very white buteo flies over me followed by two Common Ravens. This is a light adult Ferruginous hawk that may overwinter here but nest in places like Montana and Idaho. Last year there was a beautiful dark adult Ferruginous hawk that I often saw on top of the telephone poles near the intersection of Reynolds and East Commercial. I always keep my eyes open for this unusual bird.

Another buteo that seems less common but is also a fantastic bird is the Rough-legged hawk. These long winged buteos are boldly patterned, dark-brown hawks with tails that are dark at the tip and pale at the base. Like many buteos they come in light and dark morphs.

A migrant that is usually the first to arrive and often the last one to leave, is the Northern Harrier, previously called a Marsh Hawk. This sexually dimorphic bird has a white rump patch that helps to distinguish it from other raptors and an owl-like face. It often flies low to the ground making twists and turns as it listens for its prey. These hunt for voles, rats, or other rodents; but also takes other mammals, up to size of small rabbits. The Northern Harrier may eat a variety of birds, from small songbirds up to the size of flickers, doves, and small ducks. They also eat large insects (especially grasshoppers), snakes, lizards, toads, frogs. Harriers may even feed on carrion, especially in winter. This is an indiscriminate eater!

We have many resident and breeding populations of Northern Harriers in Mendocino County. Most of the breeding populations have been recorded along coastal prairies including MacKerricher and Manchester State Park, but not in our inland valleys. The many Harriers we see here are either wintering here or are flying through to warmer southern areas.

Keep looking up in the Willits Valley and other inland valleys and you will see many more raptors in the winter than during the spring. As you observe these majestic migrants think about how far they have come and how far they still must go!