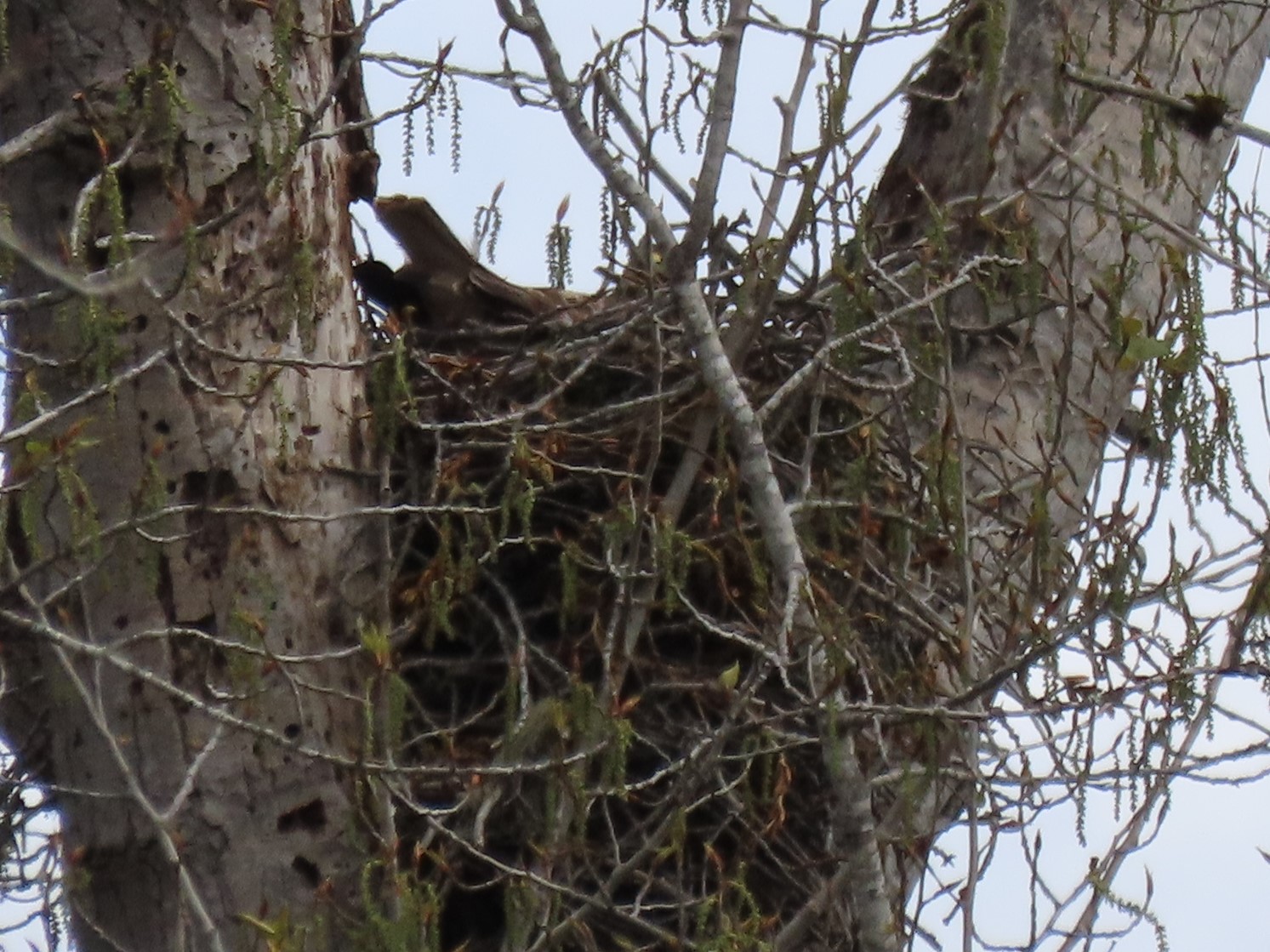 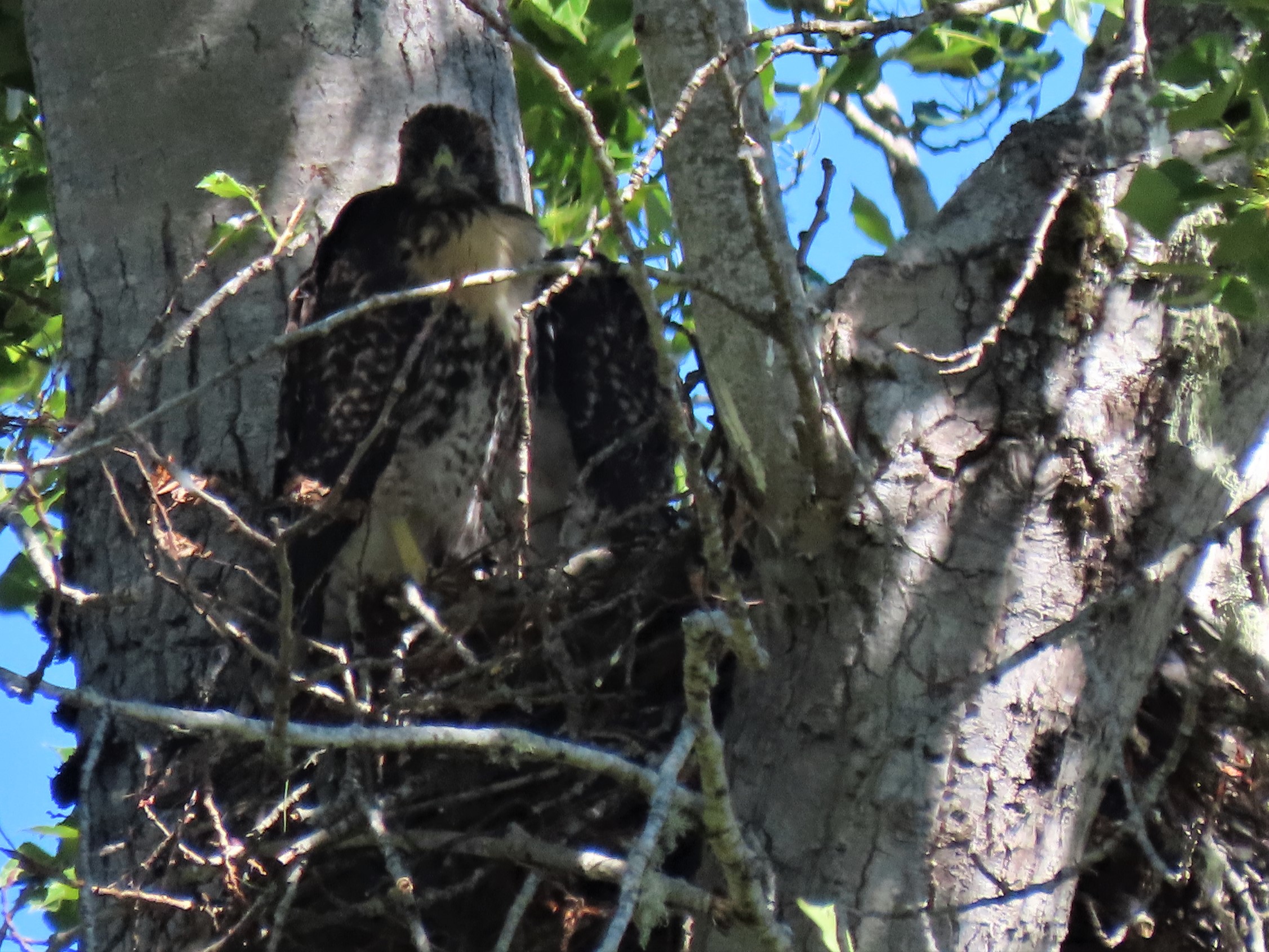 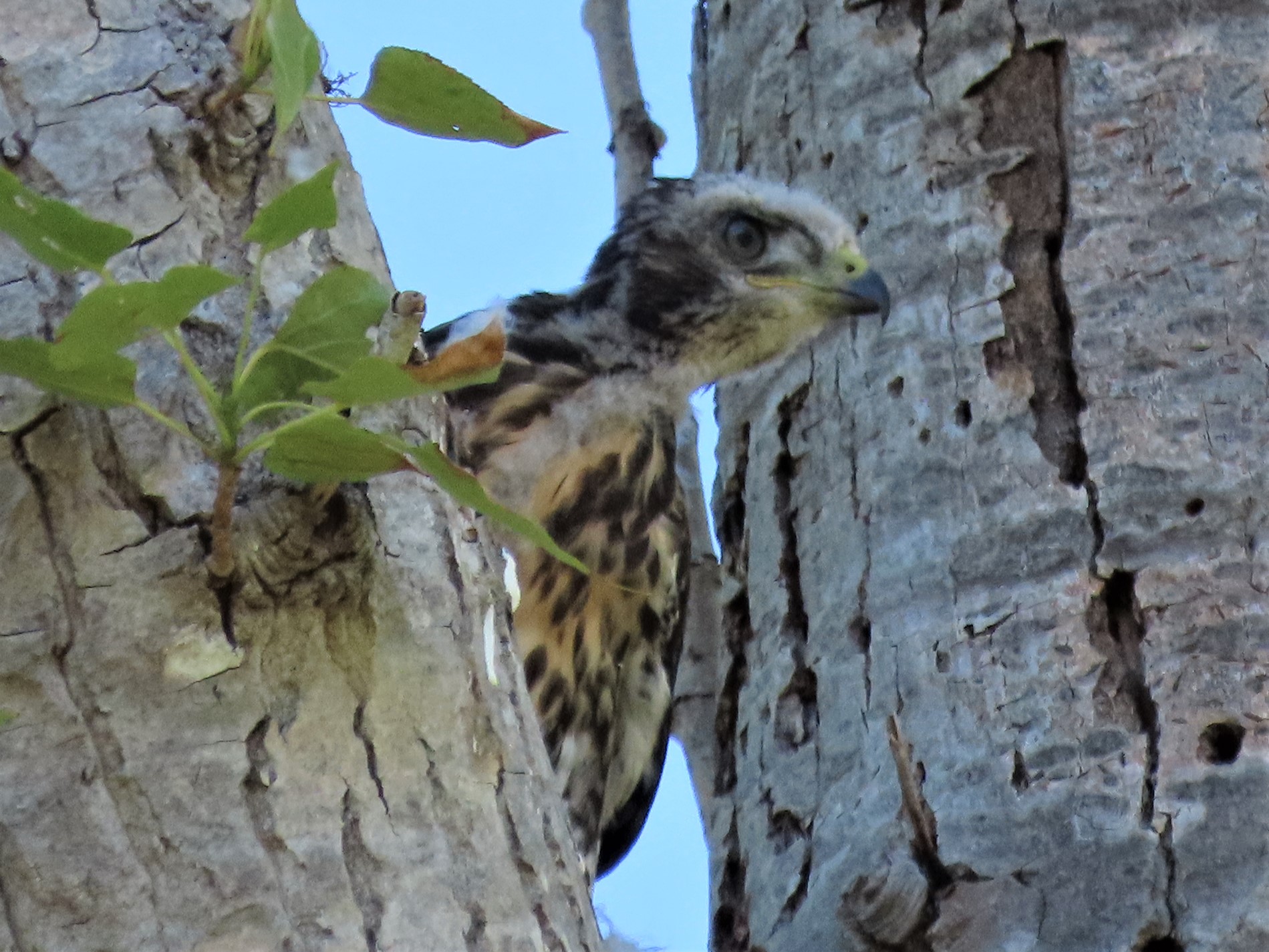 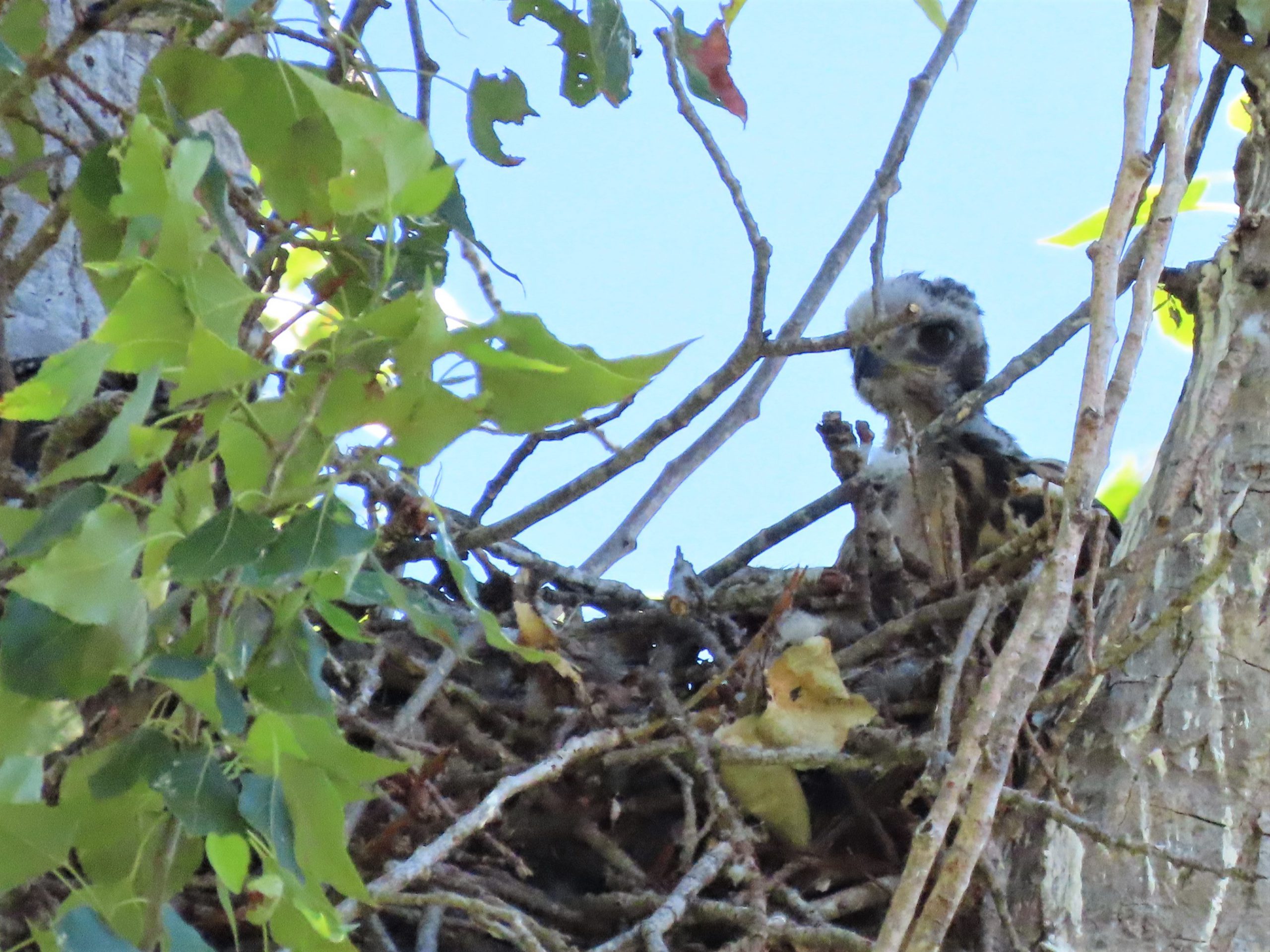 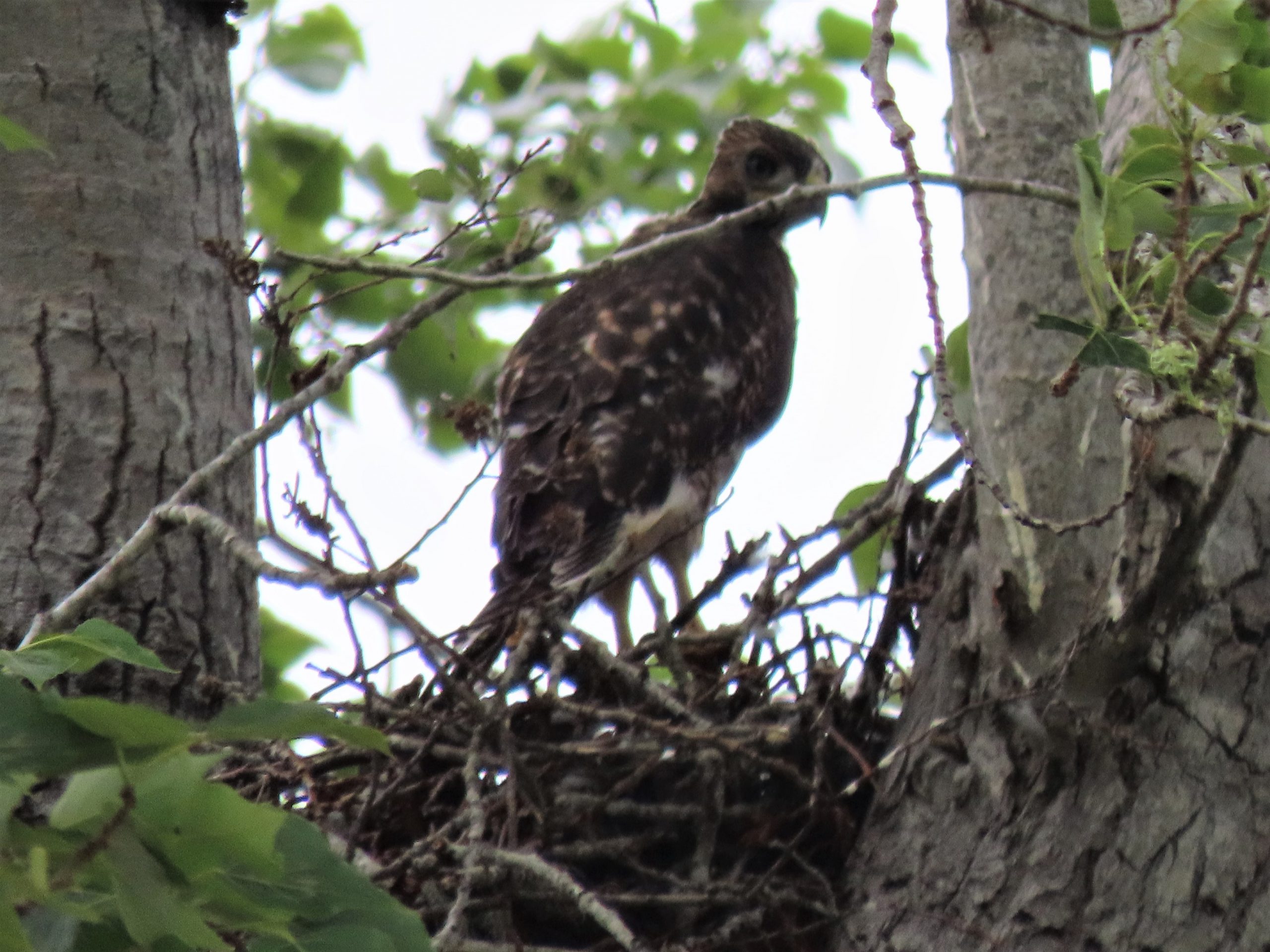 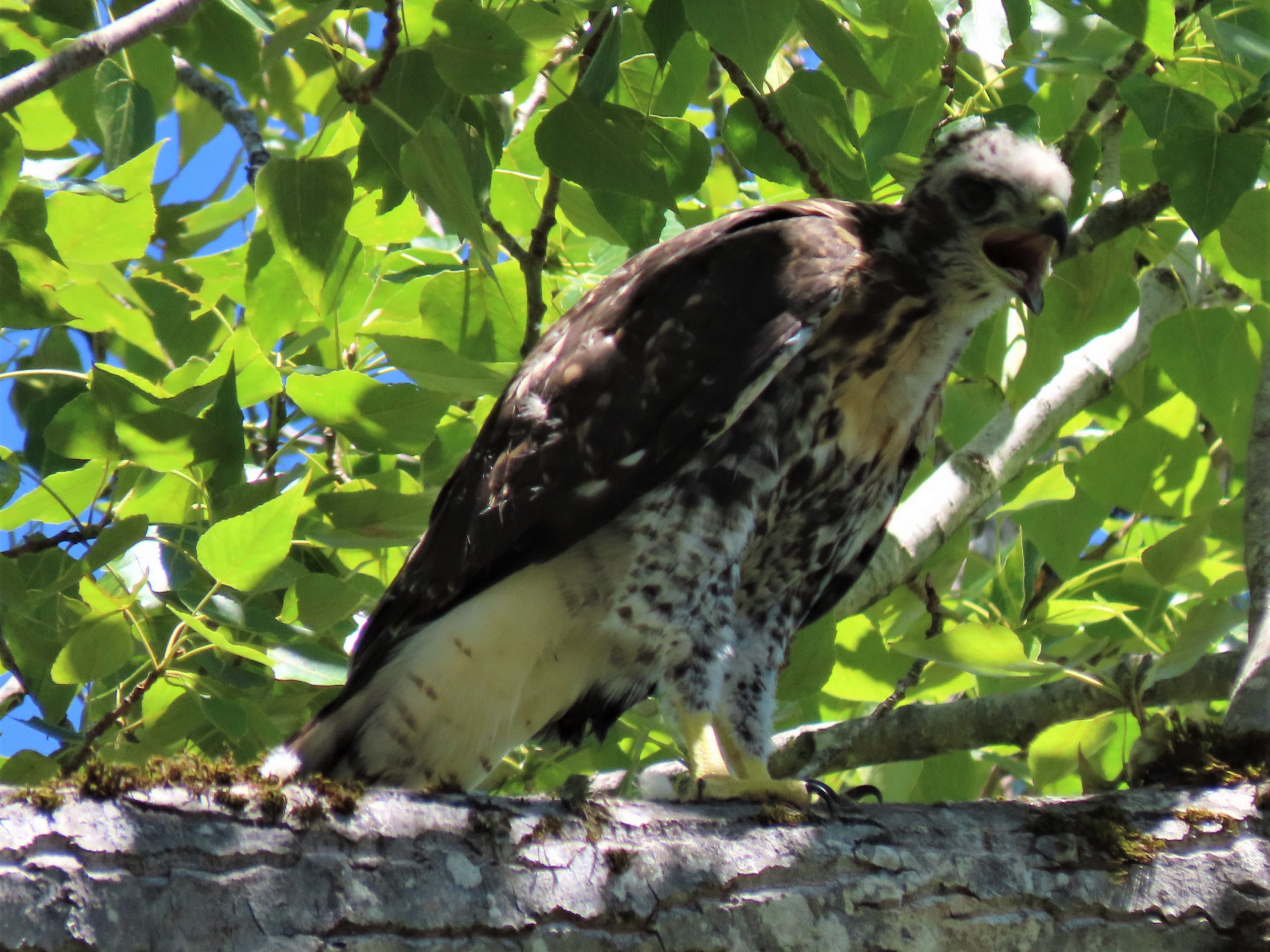 This year has been a very good year for finding raptor nests in Little Lake Valley. There are two Red-shouldered Hawk nests and two Red-tailed Hawk nests that I have observed. Today I want to focus on the Red-tailed Hawk, Buteo jamaicensus. This is our most common large buteo hawk. It has broad wings and a short tail. It is larger than an American Crow and about the same size as a Common Raven. Most of the birds that live in the Willits Valley have a dark belly band of vertical streaks and all have dark patagial markings (the patagium is the area running along the leading edge of the underwing). Adult redtails have a reddish-brown tail. The patagial markings are the markings that I use to distinguish the juvenile redtails from the adults. The juveniles do not have the eponymous red tails or dark patagial markings. These features develop after they are 2 to 3 years old.

Red-tailed Hawks mate for life, forming a strong bond that is evident in their flight aerobatics when they lock talons in the air, one flying above and one flying upside down. Their thrilling raspy screams are part of my walks in the valley. I learned recently that this vocalization is used as the quintessential call of the wild eagle in many movies and TV shows. Yet a Bald Eagle has an entirely different sound!

Red-tailed Hawks begin breeding at around three years old. They build their nests from sticks, twigs, and bark in a tall tree where they can keep a good look-out on the area for possible predators like Ravens or Great Horned Owls. They will often nest in the same area and sometimes in the same refurbished nest. Nest construction takes 4 to 7 days, where they lay two to four eggs. Incubation is shared by both the male and the female hawk for 34 days. Fledging takes about 9 weeks, but the juveniles can stay around the parents and return to the nest for another 6 weeks. This is a long process!

Last week the juvenile hawks were fledging and becoming “branchlings,” leaving the safety of the nest and moving out along the branches of their home tree. At first, I worried they were too young to leave the nest but then realized they were quite capable of flying to other branches.

In each of the Red-tailed Hawk nests I observed and took photos of, there were two young that fledged. I was very careful to not disturb the nests or be too conspicuous when taking photos. I did not want to scare the young birds or have Ravens and other predators to be alerted to the nest. While building a nest, adult hawks can be easily disturbed to the point where they will abandon the nest. However, once they have laid eggs or have young that have hatched, they are less likely to flee the area so easily. A couple of times, as I was taking my ‘inconspicuous’ photos, the scream of a large Red-tailed Hawk filled the air and I knew I had been discovered by one of the parent birds. This prompted me to slowly turn away without looking at the nest and maintain a decent distance.

It has been a privilege to be able to watch the two pairs of Red-tailed Hawks throughout their breeding cycle. Observing these birds bringing in nesting material, sitting on the eggs, feeding the young, and now watching as the young take their first flights to explore their environment has been a fulfilling experience. The four juvenile hawks have a good chance of making it in the world, yet they will encounter many obstacles along their way. I wish them good luck on their adventures ahead.