Planting Shade and Diversity in the Pastures 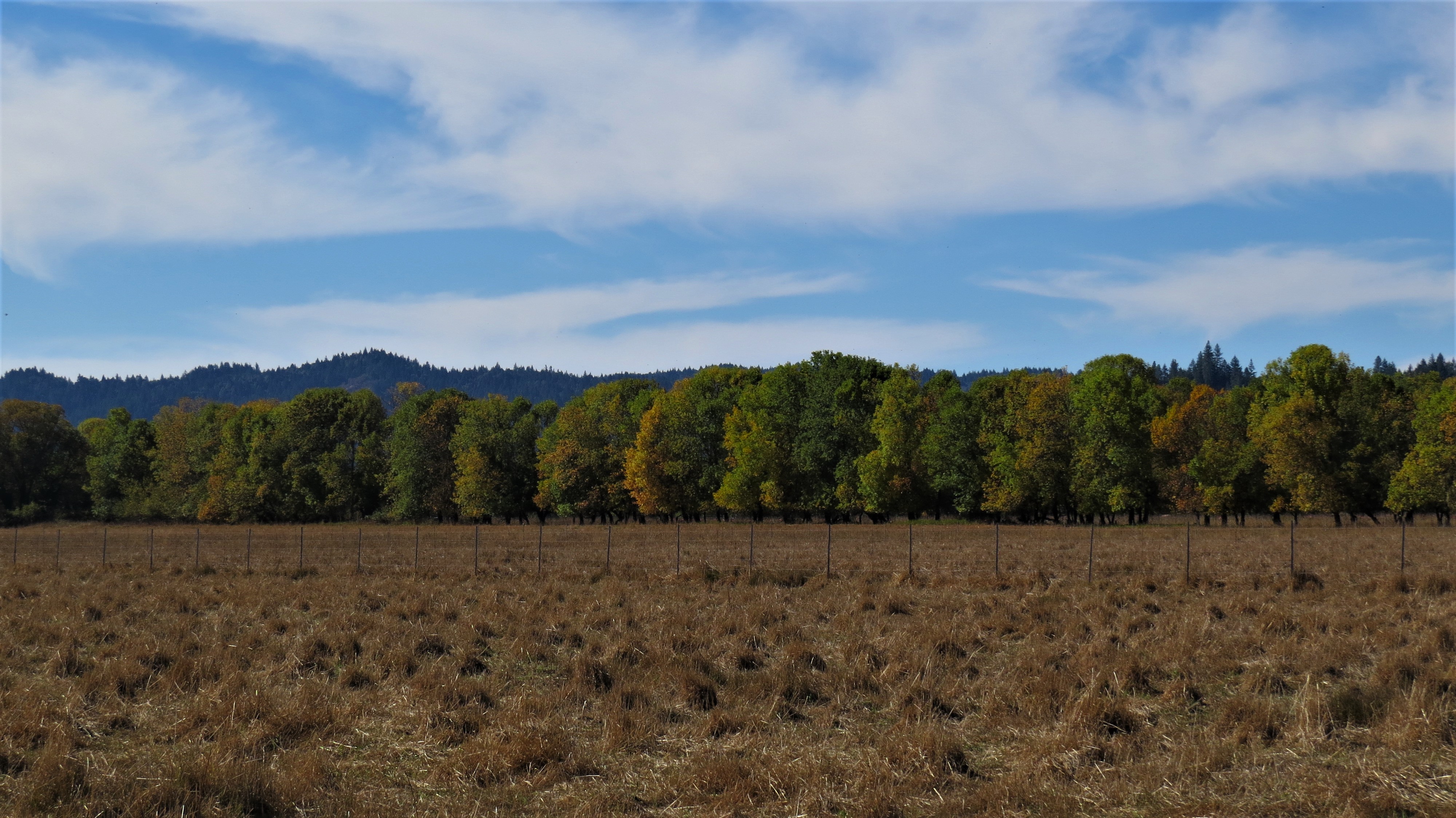 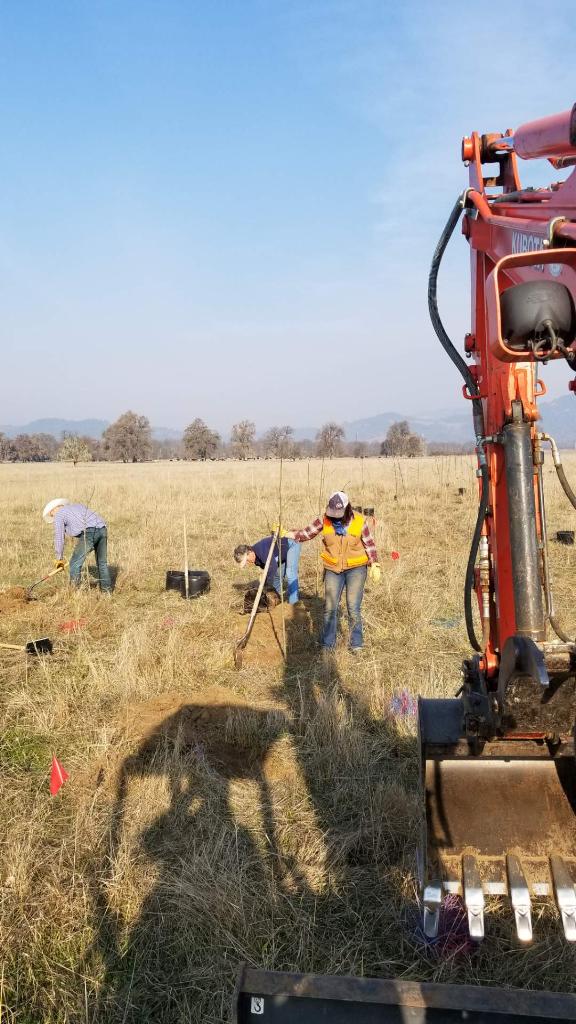 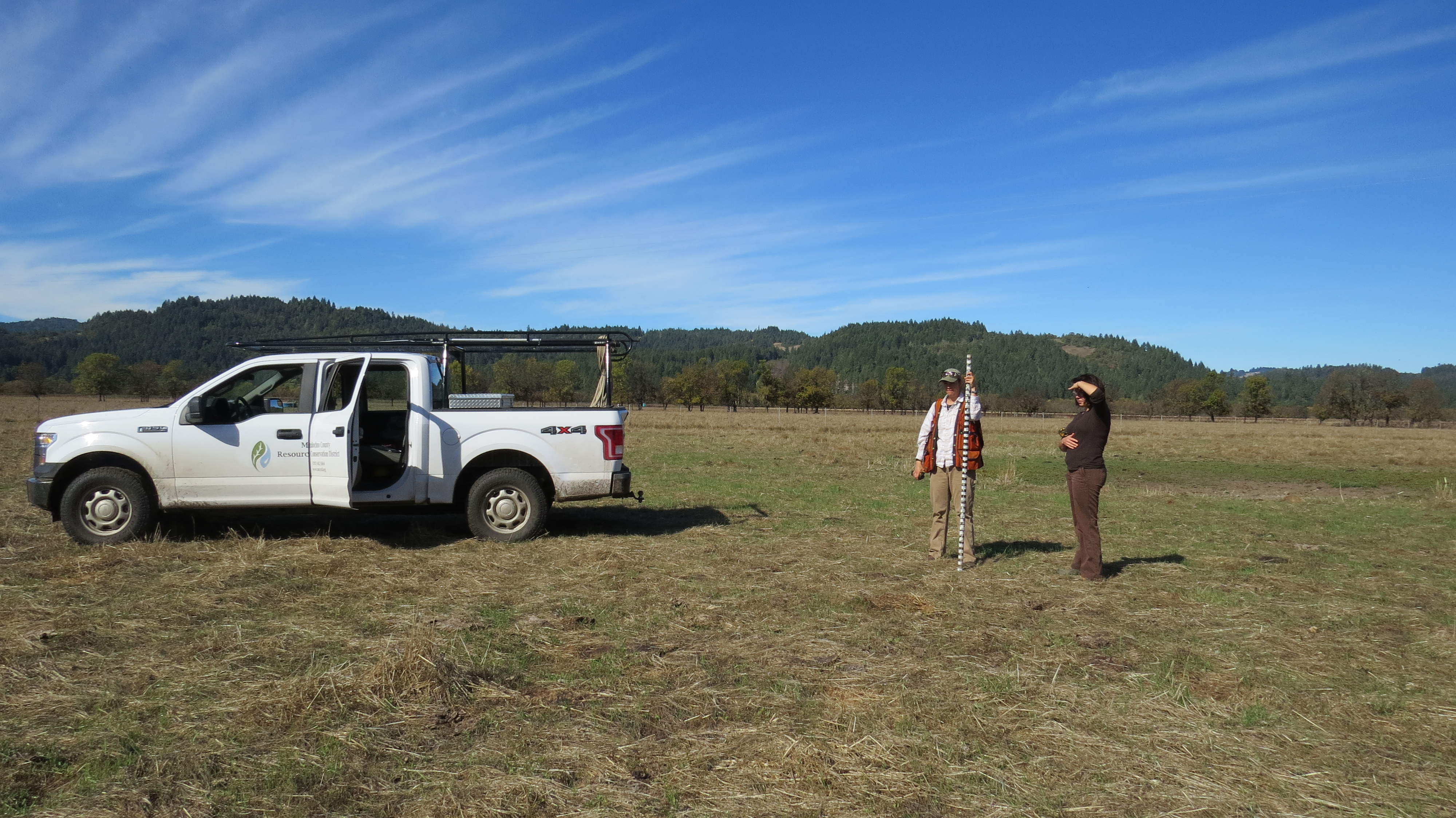 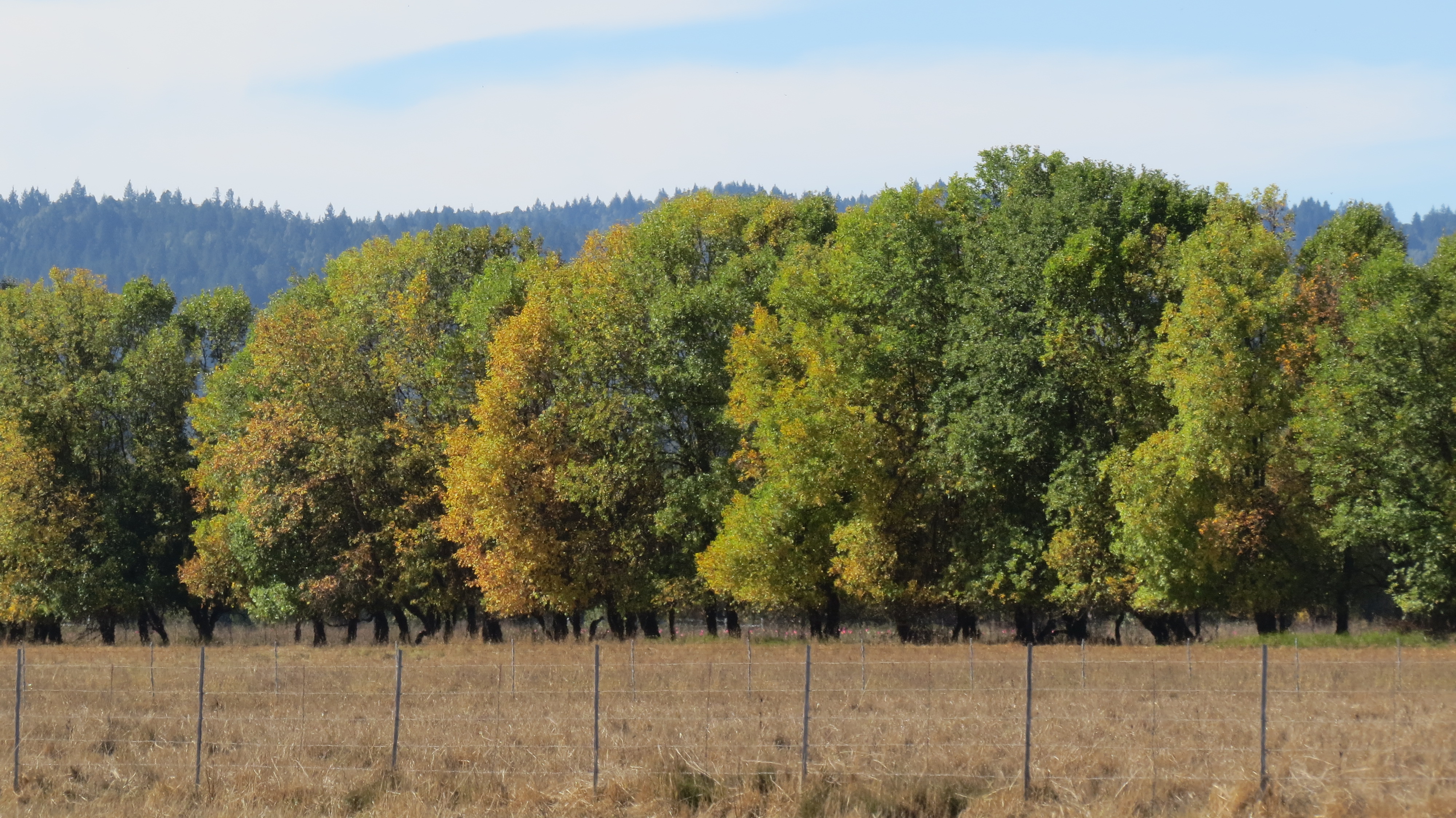 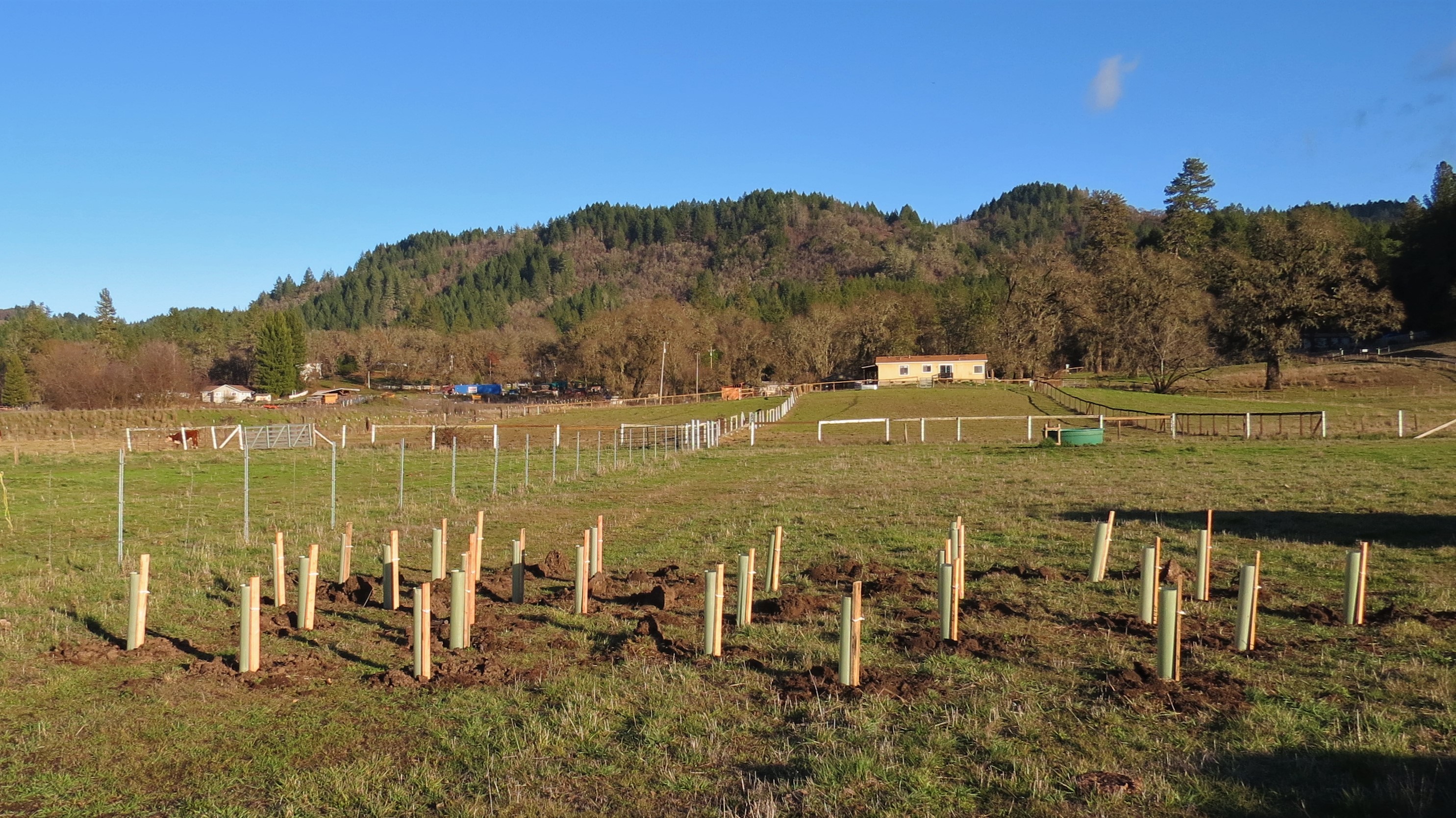 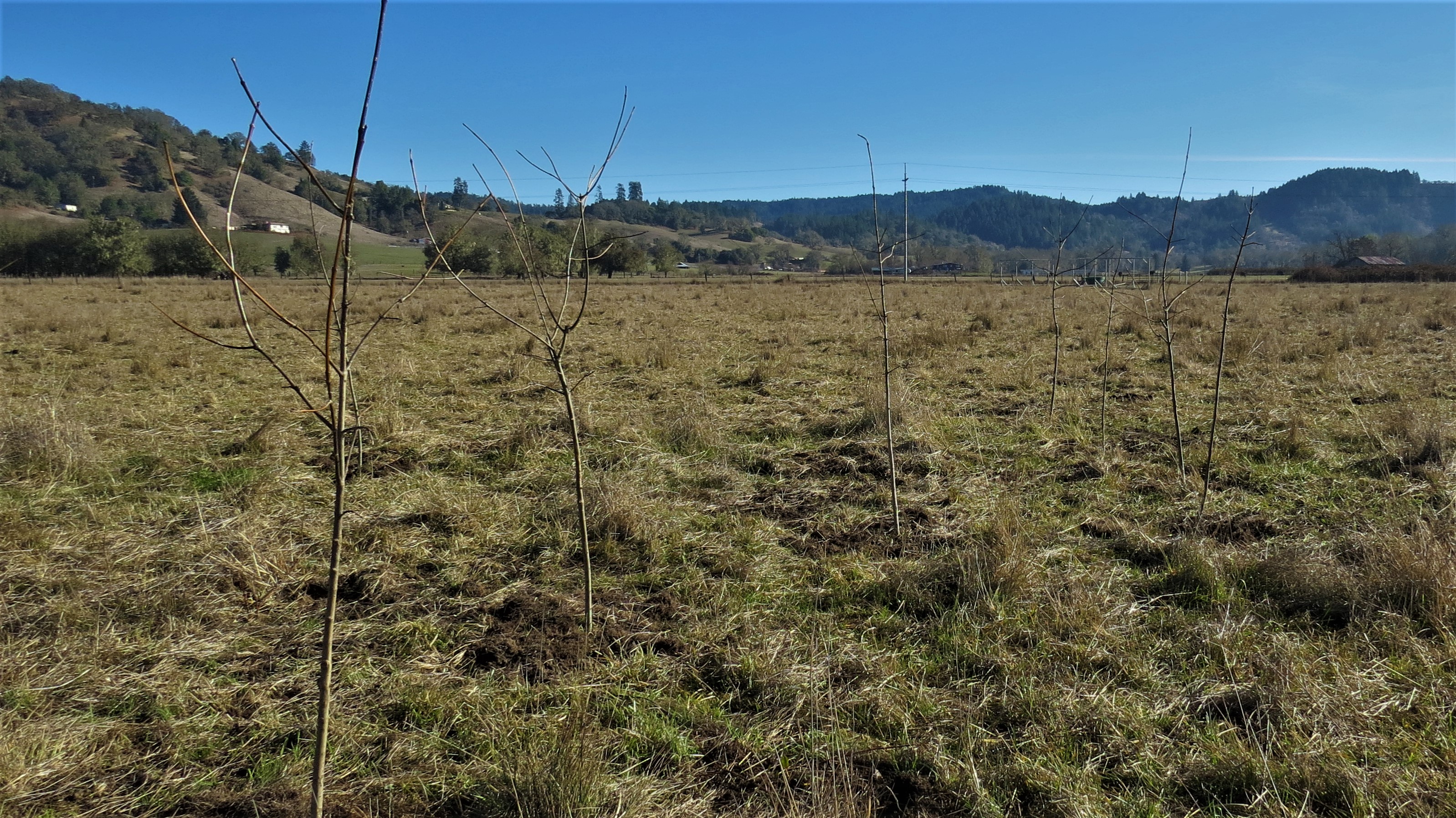 This week our team is planting for diversity and shade in some of our open grazing areas. Construction efforts on Mitigation lands left several areas utilizing livestock as a management tool with a lack of natural shade for animals during the hot summer months. The installation of new infrastructure, primarily fences used to protect riparian areas from grazing animals, excluded trees traditionally used by livestock as shade. Moveable 10′ by 20′ shade structures were built by Caltrans to address this situation, but after three years of operation, these structures have proven to be inadequate. MCRCD proposed the installation of additional trees as a long-term permanent solution to this problem. In 2016 we constructed a nursery on the mitigation project and began propagating local native plants to be introduced to selected pastures for habitat enhancement. Oregon ash trees were ordered from a native plant nursery and kept on- site in order to grow to a height tall enough that would limit the ability of livestock to browse the main leader and upper limbs. Acorns were collected from valley oak trees near the desired establishment areas and were sprouted and transplanted to rooting tubes. Coyote bush was gathered from within the watershed and transplanted at a suitable time of the year when the ground was moist and pulling the plants required little effort, and these were potted-up and warehoused in the nursery for transplanting later.

After we had had sufficient rain to get the ground decently moist, we began the planting of the trees. We started with the 100 Ash trees in their 15 gal pots. They had reached a height of 5 to 8 feet tall and because they were so large we used a small bobcat to dig the holes for us. It was amazing to put them in the ground where there were no other trees. Standing back and looking at them was very satisfying as they looked like a small forest in a vast open pasture.
Our forester helped us plot out the arrangement of the trees in order to ensure there would be enough space for each tree but also to give them some protection from the sun. It was an arc of trees from south to north. We planted the Ash in 4 different pastures. The trees were watered in with a hose and watered a couple more times before we had more rain. The last thing that we did was set an electric wire fence around the ones that were in pastures that still had cows in them to protect them from being messed with.

The next planting we began was in a pasture northeast of the valley that we call Plasma. The main pasture was barren of trees and we chose to plant the valley oaks there. There is already an established Valley oak woodland to the west of this pasture and we felt it was a good idea to plant that species. The acorns had been collected on site and now the oaks had germinated and grown. They were ready to plant. We have somewhere around 300 of these so it is a long-term project. Each hole is carefully scraped of potential competition from grasses and then a protective tube is placed around the planted tree which is attached to a sturdy stake. This is to protect them from deer and rodents that will eat the sprouts and even the acorns attached to the tree. We will hot wire these to keep the cattle off of them while grazing is occurring in that pasture and give them water during the hottest part of the summer.

As each group of 14 is planted, we are hopeful to have a few make it and become majestic, shade providing and wildlife enhancing Valley oaks. It is a labor of hope and love.