More About the Tule Elk in Winter 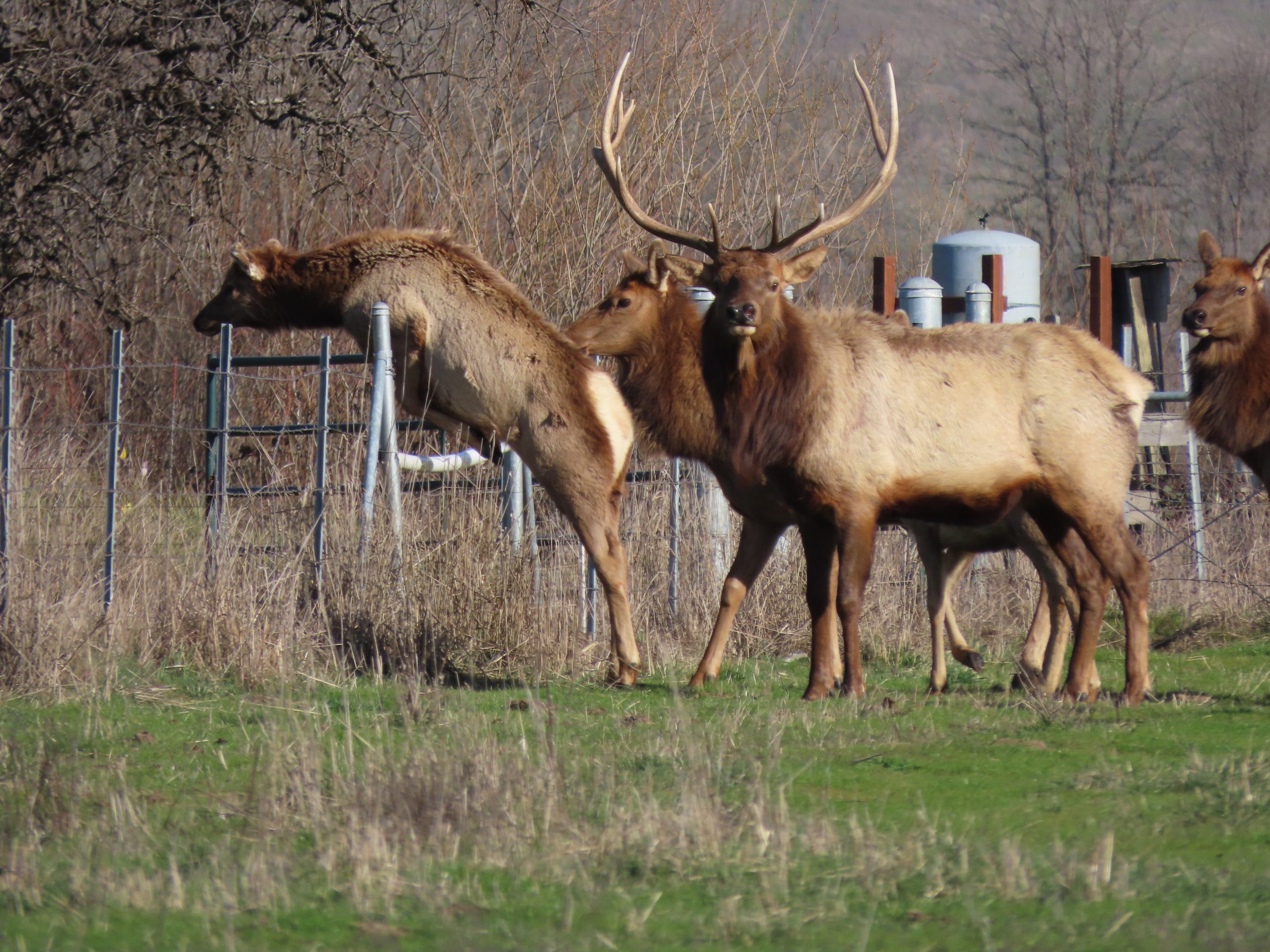 Bull elk waiting while a cow elk crosses over our wildlife-friendly fences. 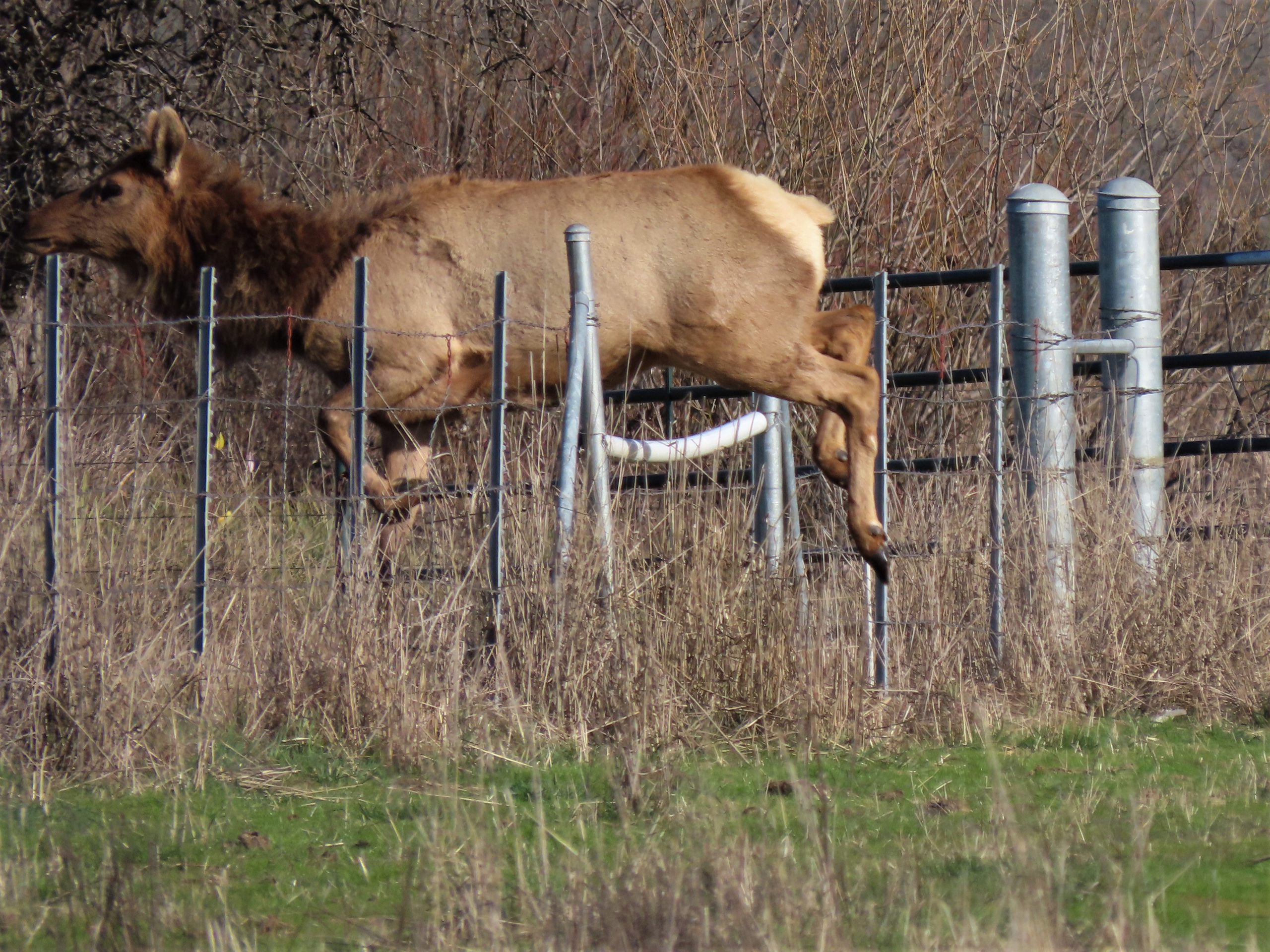 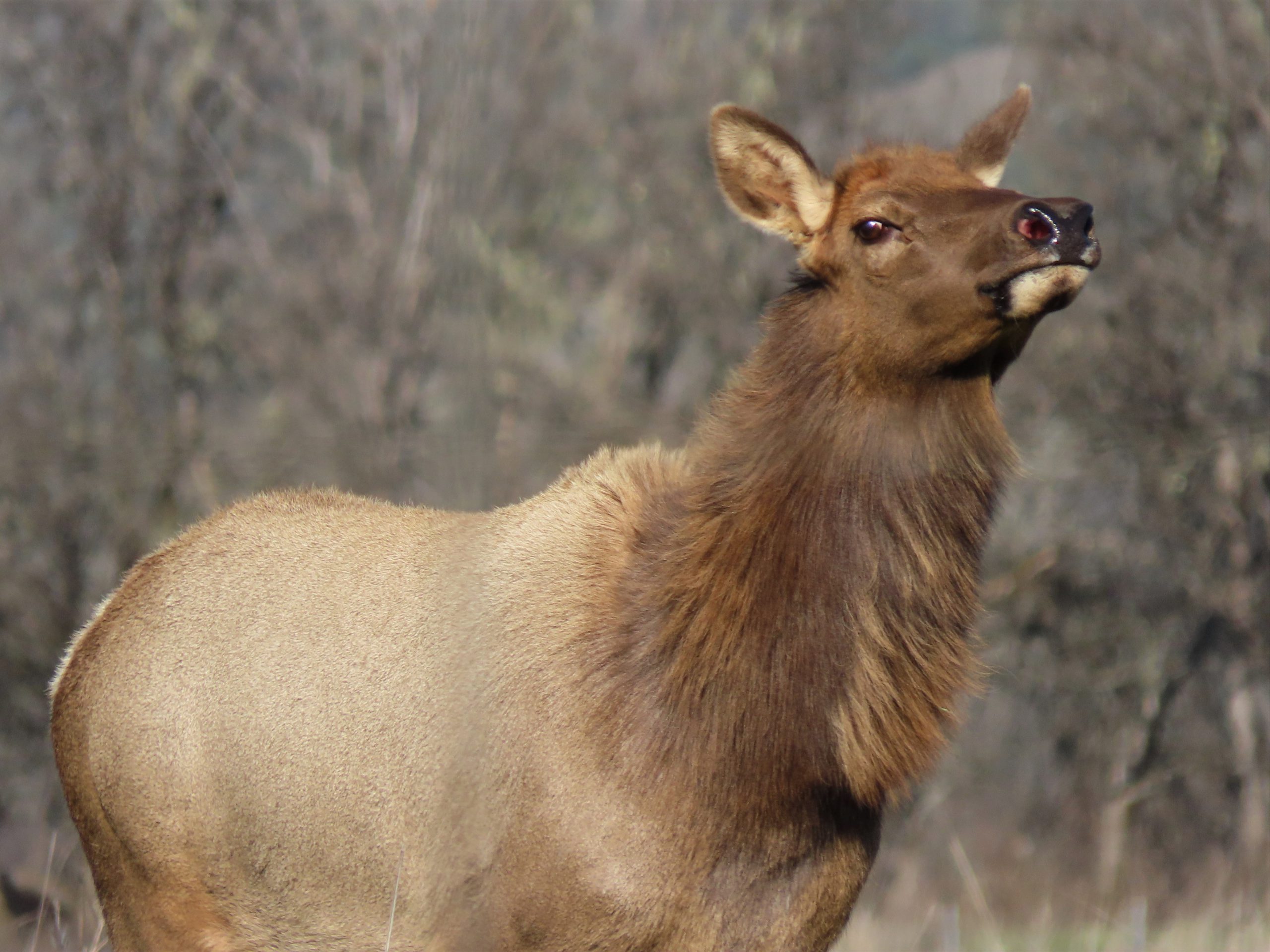 Elk herd prancing through the water in the Mill Creek overflow wetland. 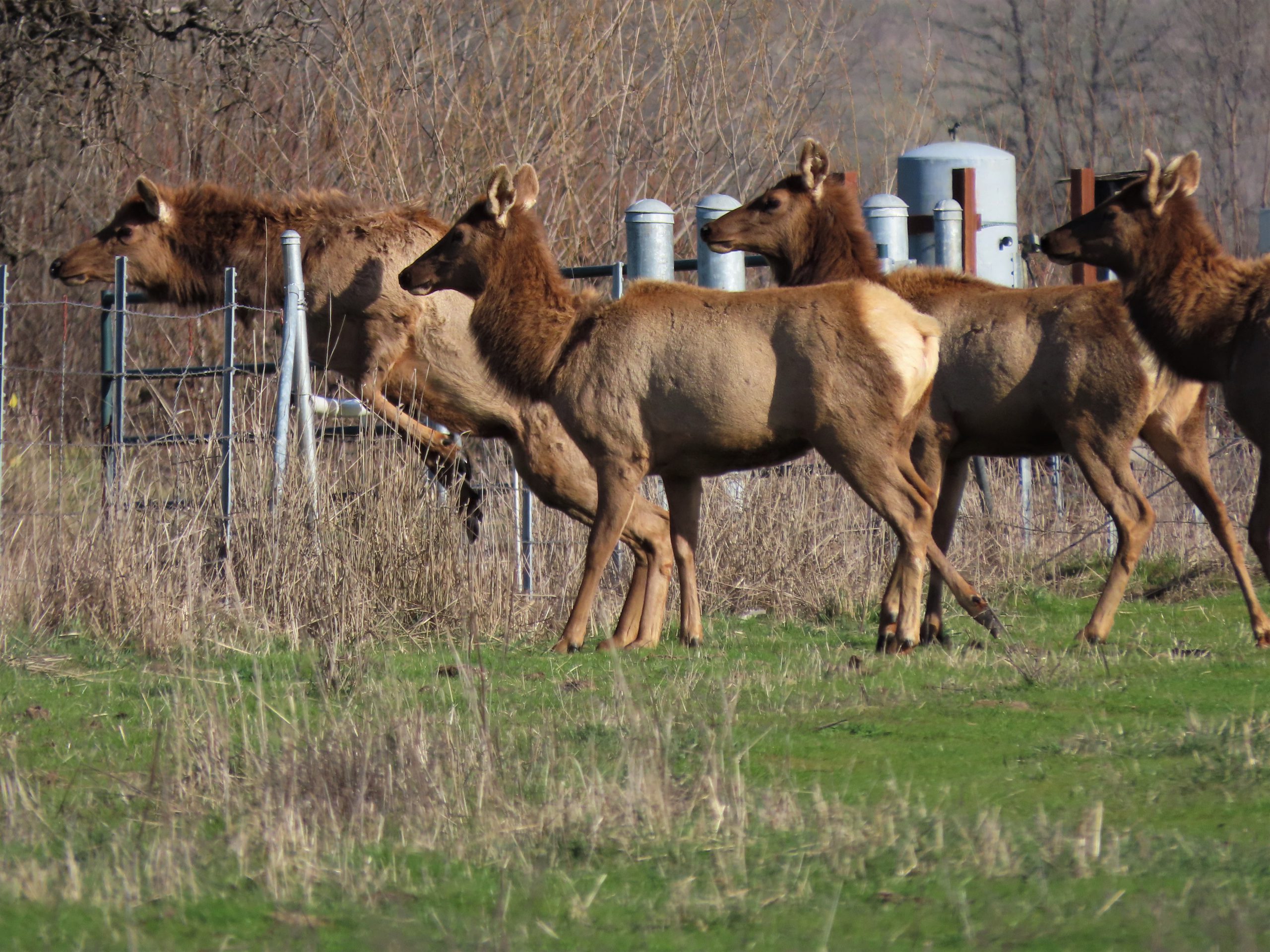 Young and older elk cows make the leap over the crossing. 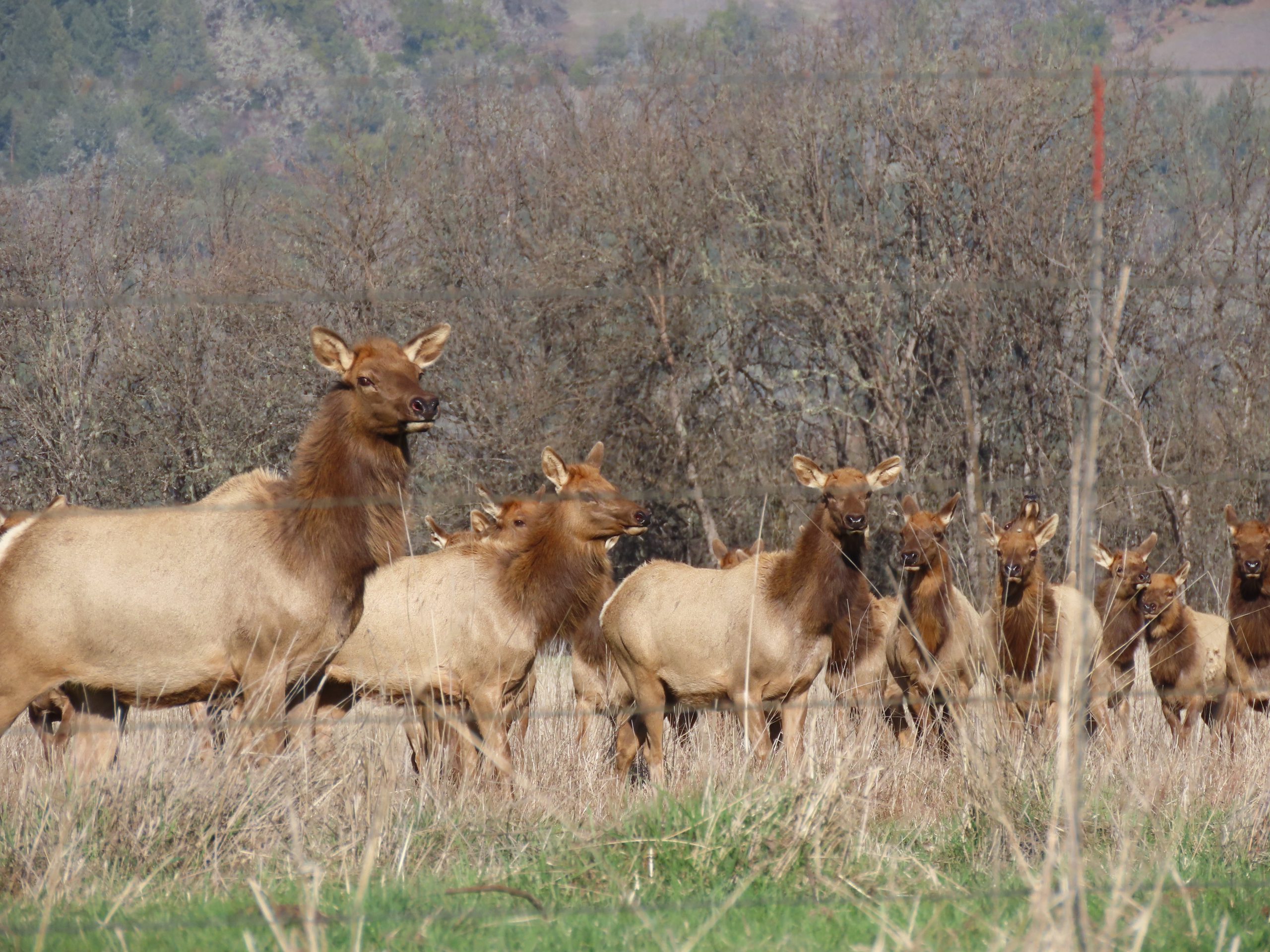 The rest of the elk cow-calf herd stopped to see what the dominant cow is barking at.

Many amazing wildlife interactions are pleasant surprises that happen without planning. Last week I was out in the late afternoon on the west side of the valley. The land is open, and it is easy to see for long distances from the north to the south. The first thing I saw was that the elk herd was way to the south of me, looking relaxed and seemingly busy with the business of grazing and browsing on some ash trees. This was good for me because my goal was to move away from them towards Outlet creek to make observations on some recent beaver activity. As I moved to the east, I could see that the herd was all beginning to stand up and become alert. Since I was moving AWAY from them, I thought all would be okay. That is not what they were thinking as I soon found out.

As I moved northeast, the whole herd (39 cows and calves and one bull so 40 altogether!) began traveling the same direction. They moved fast, sometimes running then stopping to see what I was doing.

It seemed we were all heading for the same point. This made me slow down and eventually I just sat down to see if that would make them more comfortable to cross in front of me. They were making a beeline for one of our wildlife-friendly fence crossings. Just about the entire herd jumped over it and a few of the younger elk easily ducked under. Then the last three seemed to notice that right next to the crossing was a wide-open gate and they decided to take the easier route rather than jumping! The moment they were all over on the other side of the fence they suddenly stopped. A large cow elk began walking towards where I was sitting, about 20 feet on the other side. She began making those barking sounds I have heard before and did a little foot stomping too. The rest of the females kept edging closer to get a look at me. Looking down I realized I was wearing all brown. Sitting on the ground like that I may have looked like an elk calf or even a potential predator such as a bear. I began to wonder how close they would get to me especially with the safety of the fence between us.

At that moment one of my colleagues had arrived and carefully walked up next to me. He had almost crawled to not disturb the scene, he too, was witnessing. We talked in low voices and the whole herd turned and headed for the wetland area to the north. We watched as they frolicked, pranced, and played in the shallow water.

It was interesting that the large cow elk was being so assertive while the big bull elk stayed as far away from me as he could without leaving the herd. He had turned his back to me, was he disinterested or was he afraid? It was another close interaction with a cow elk, and I wondered if it was the same one. She is clearly the dominant female and a natural leader in the herd since the rest seemed to follow what she was doing. Most of the large and 2-year-old plus cows will probably be pregnant at this point so the bull is no longer as aggressive.

As the herd runs and splashes in the wetland I am struck by their beauty and their natural place in this landscape. I am grateful for this interaction with them.