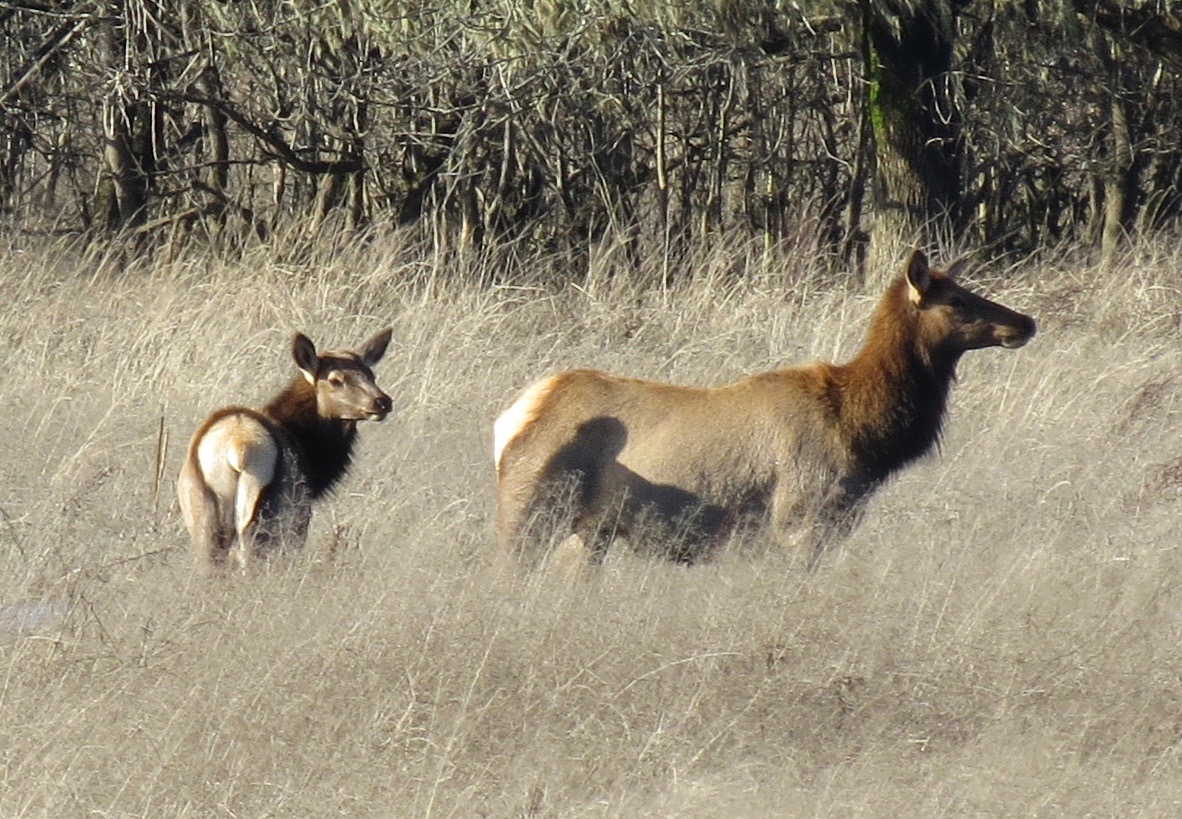 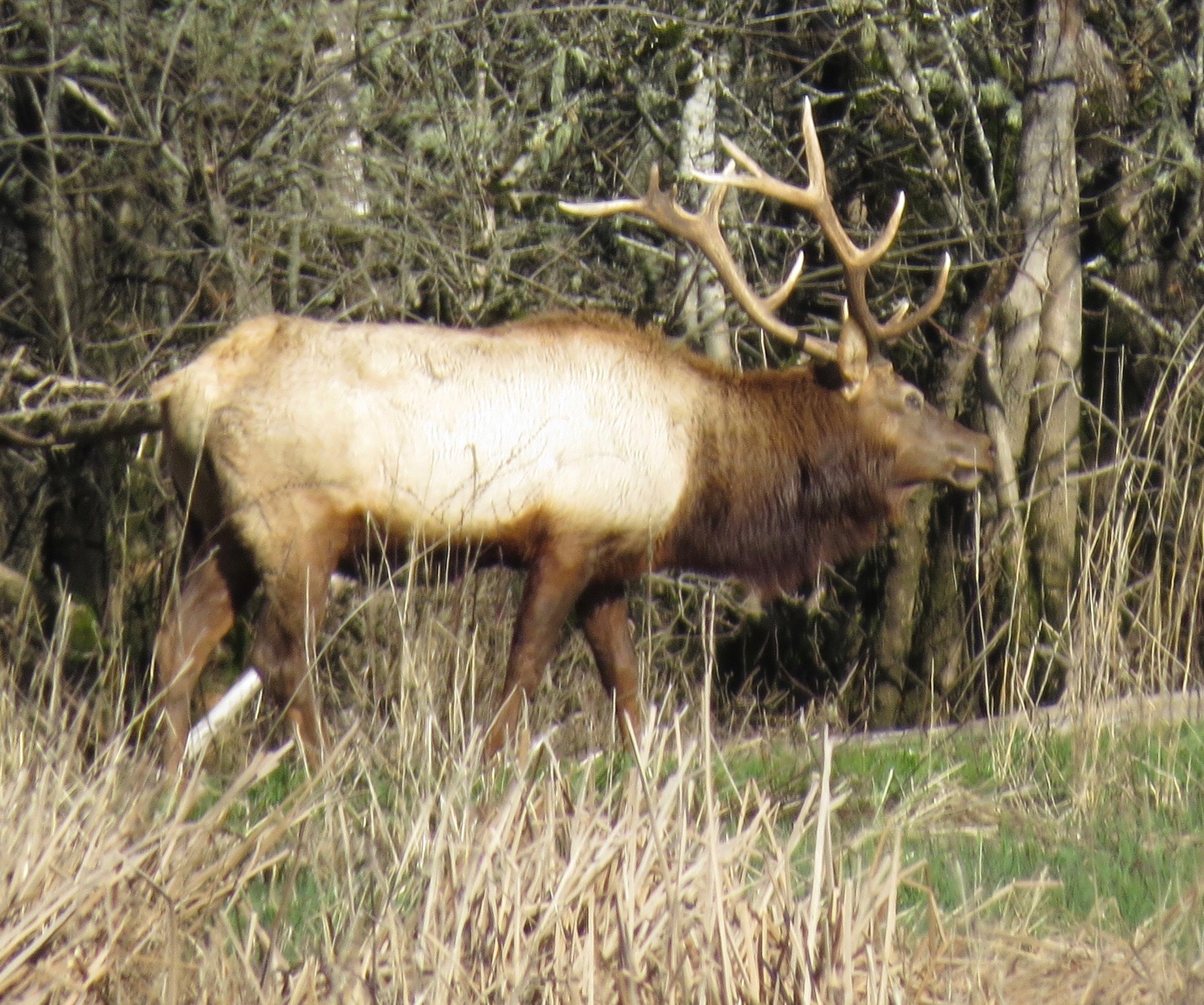 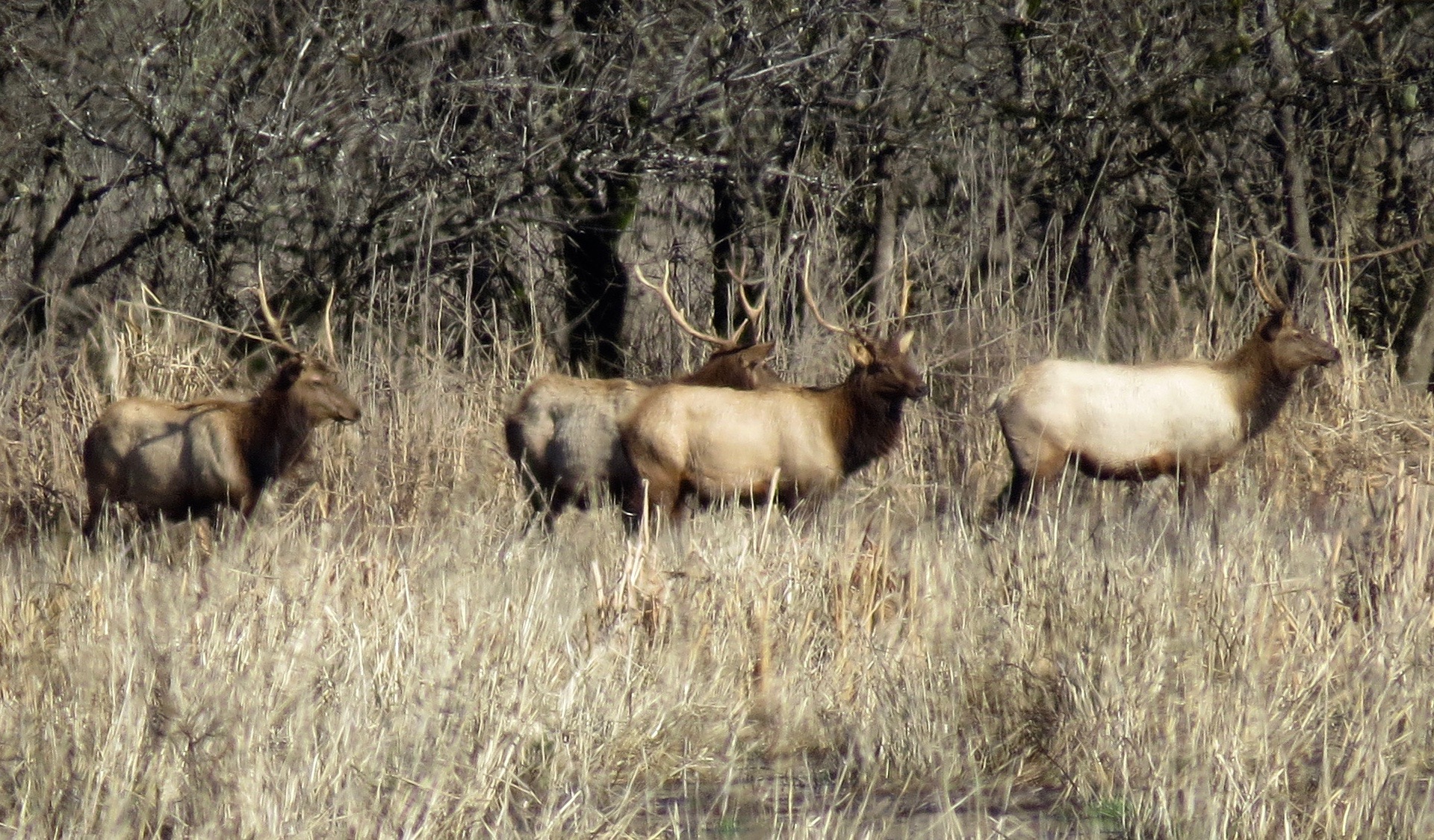 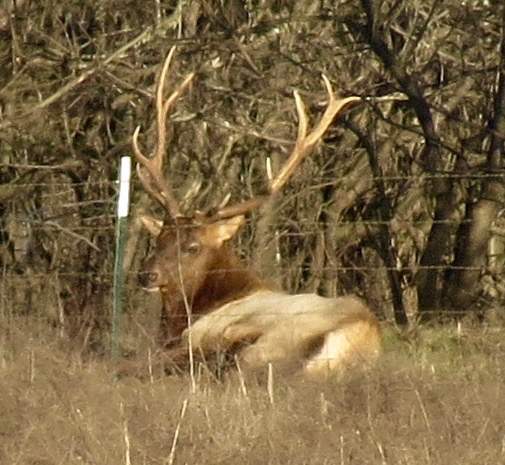 Today is a cold, cloudy day, as a weak system moves through Willits. My thoughts are full of the Tule Elk(Cervus canadensis nannodes). Almost every time I come out into the valley, I am treated to a sighting of these elk. Around 2010, the first Tule elk was seen in the Little Lake Valley. In the following 8 years their population has increased to somewhere around 35 to 40 animals. They move through the mitigation lands, the City of Willits treatment plant property, and other private lands. I am out in an area called the Watson piece, in the north end of the valley. Signs of elk are everywhere, droppings, browsed vegetation, and bedding areas. In the distance I count 20, mostly what look like cow Elk, but I am far from them, so there could be young bulls in that group.

Male Tule elk are called bulls, females are cows, and the young are calves. They are lounging in a green pasture, some on their sides, others grazing in the lush field. During the winter months they are in combined groups with cows, bulls, and calves together. When the young bulls form small groups, they are generally not as cohesive as cow groups. When I get too close to the group the cows will take off as a unit, so I am careful to stay a good distance away. The bulls segregate out from the cows and calves in late spring through the summer antler growing period, then rejoin cows and calves during early fall and winter. Groups of 3 to 5 bulls are commonly wandering around during this time. I refer to them as the “lesser “bulls. The rut season begins as early as August and lasts until November. During this time the bull “bugles” are heard throughout the valley. To me this sound is more like a toy bugle, not a real bugle!

Here is some natural history information about the Elk: they are the second largest member of the deer family in North America, they can weigh from 500 to 1000 pounds and are grazers and browsers. Management of these animals is a priority for the Department of Fish and Wildlife.

We are fortunate to have a healthy, growing population in our Little Lake Valley. Their presence makes for an interesting and diverse ecosystem.

CDFW has completed the first draft of the Statewide Elk Conservation and Management Plan. This document will be available for public review and comment through Monday, Jan. 29 at 5 p.m. Comments received by the deadline will be reviewed by CDFW, and appropriate changes will be incorporated into the final document prior to its anticipated release in early 2018. Comments may be submitted online at ElkManagementPlan@wildlife.ca.gov or can be mailed to: