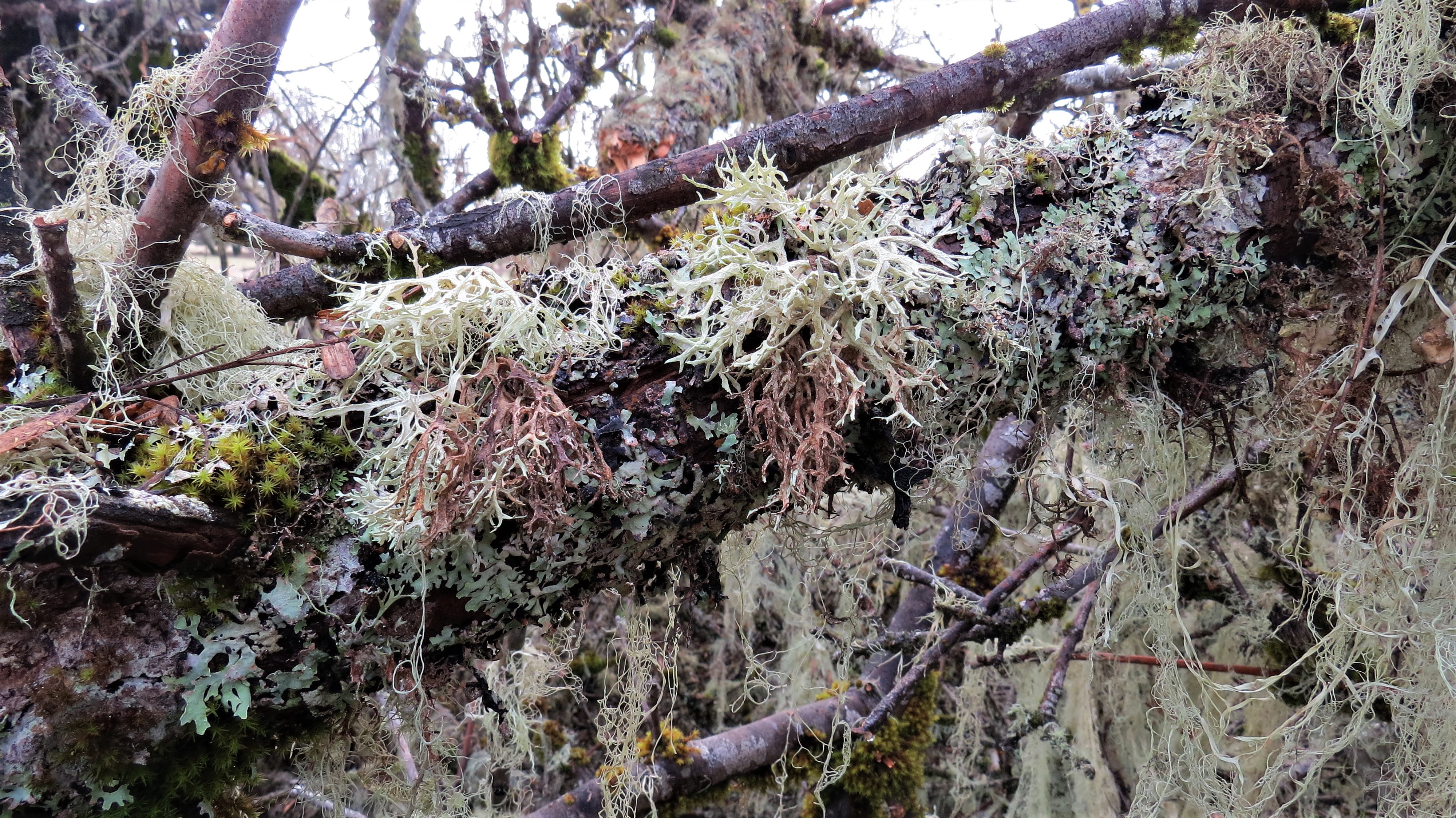 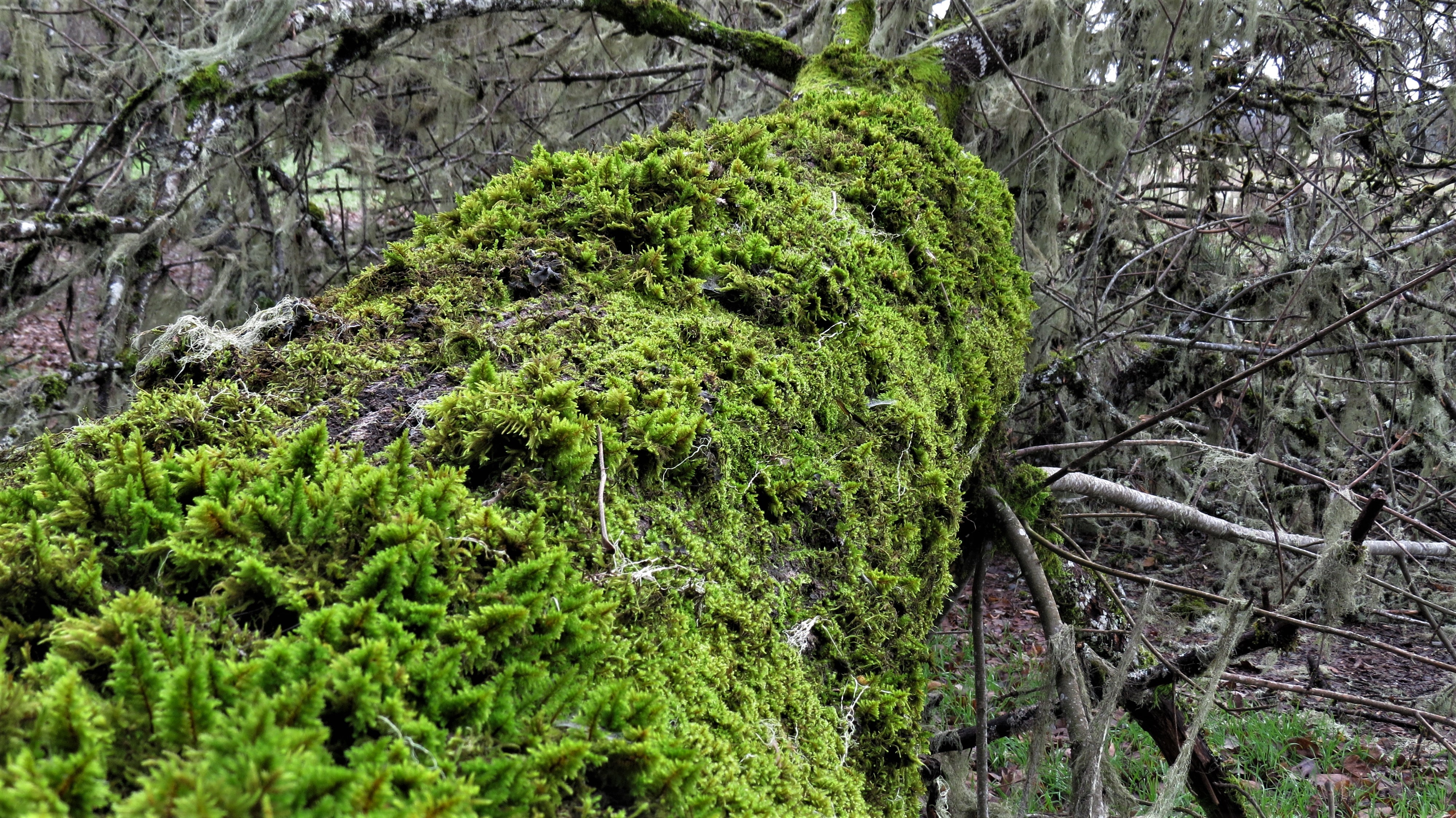 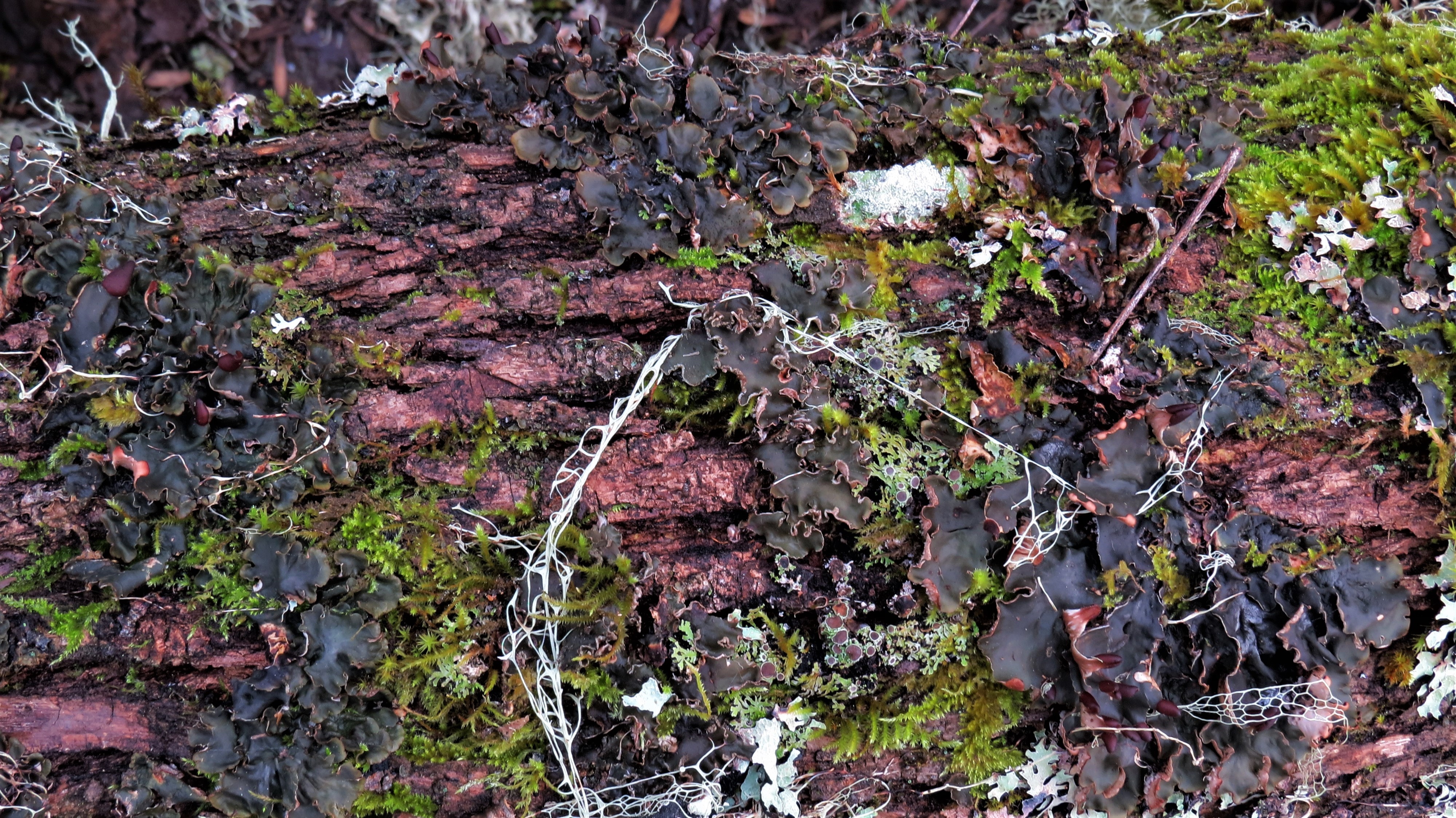 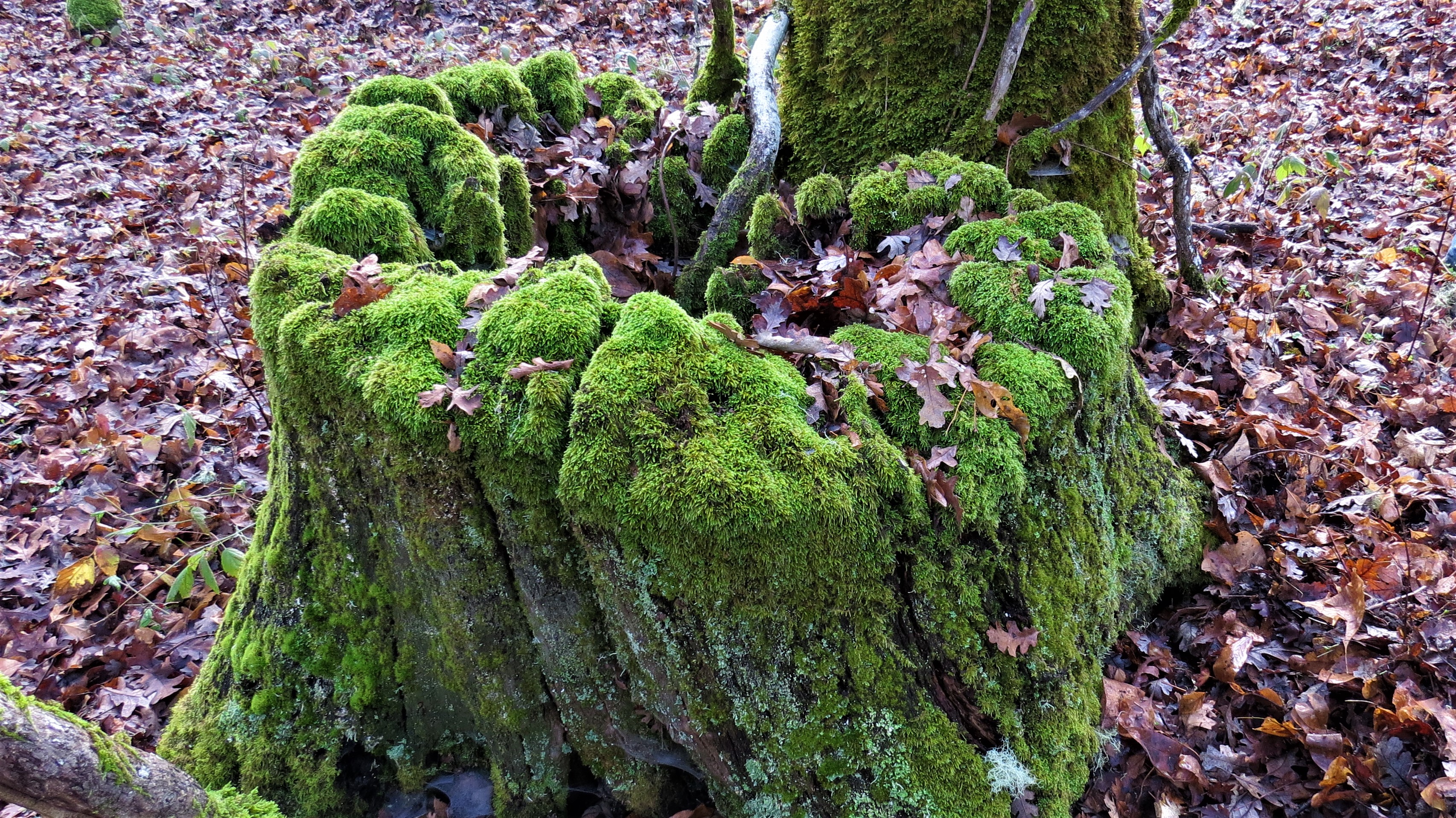 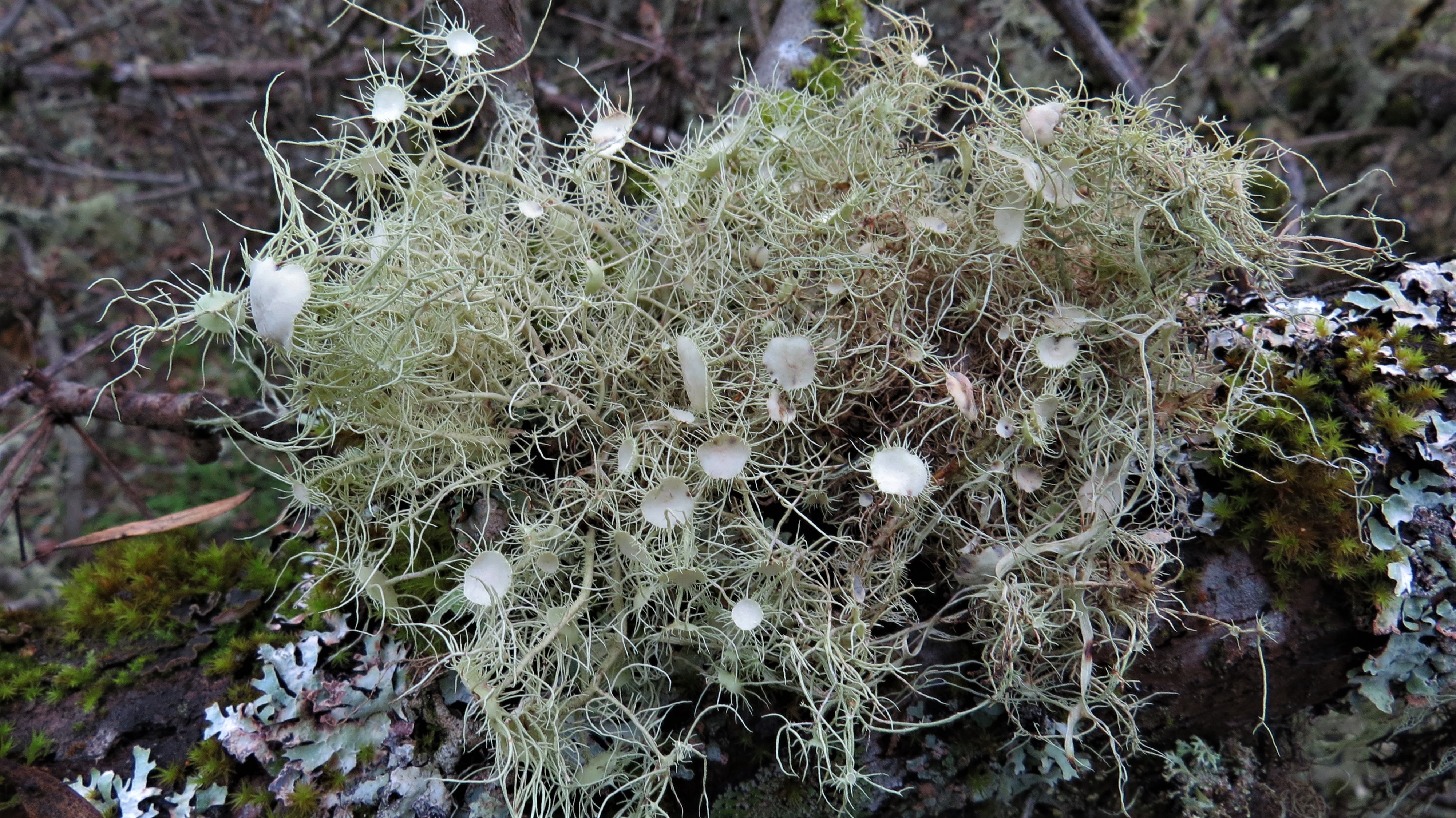 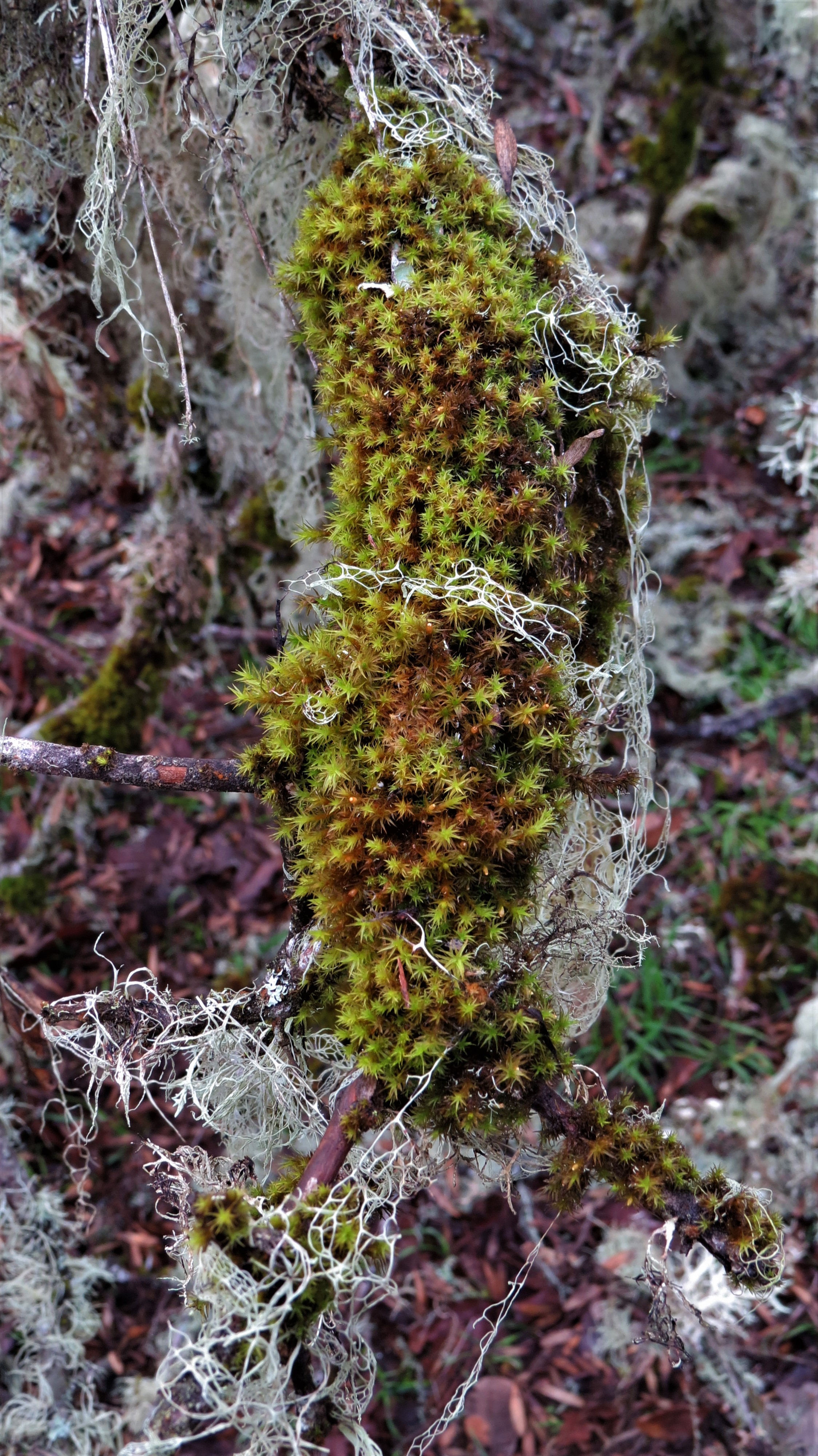 Another wonderful rainy winter day as I head out to the Berry Creek area with my full rain gear on, raincoat, pants, and high top rain boots. I even bring my umbrella so I can take photos while it rains. Today the colors of the lichens and mosses stand out to remind me this is their time to shine. Last year I wrote a blog about them and their differences now I am inspired to write more about them. An Ash tree has fallen across the path with a diverse array of both of these plants. It is astounding to get such a close look at these epiphytic (growing upon a substrate) plants that normally are high up in the tree canopy. Once again I review in my mind the differences between a lichen and a moss.

According to Wikipedia and the National Forest Service, a lichen ” is a composite organism that arises from algae or cyanobacteria living among filaments of multiple fungi in a mutualistic relationship. Lichens are a complex life form that is a symbiotic partnership of two separate organisms, a fungus, and an alga. The dominant partner is the fungus, which gives the lichen the majority of its characteristics, from its thallus shape to its fruiting bodies.” It was only recently that a biologist discovered that it was not just 2 species living together but that there were sometimes many species making up the one lichen.

But for me I can tell something is a lichen because it comes in 4 forms that are readily distinguishable from each other. The first is called foliose and looks like a wavy either grey green or brownish leafy underwater coral. The similarities sometimes are uncanny at least I think so and if you have ever snorkeled in an enchanting coral habitat there are algae and corals that look like these lichens. They can be bicolored with a black on the underside of a lighter or darker shade of the same color as the top. They can be found on tree bark, rocks, and soil. The second type of lichen is called crustose and is just what that word says, flat and crusty looking. Crustose (or Crustaceous) lichens are, as their name suggests, encrusting forms which spread over and into the surface of their habitat. They cannot be removed from the surface without crumbling away. Foliose lichens are lichens with leafy lobes, which spread out in a horizontal layer over the surface. They are attached by root-like threads and can be easily removed with a knife. The third kind of lichen is called, fruticose, and is perhaps the most spectacular of the lichens. The Concord symposium defines them like this:

Fruticose lichens are either shrub-like small mounds, growing up from the ground, or beard-like, small tangles looking a bit like spanish moss when hanging down, attached to the substrate only at their bases, and usually with a circular cross-section.

These also really remind me of undersea beauties. If you have a hand lens or close up binoculars, a whole world will unfold when you focus on them. The main one we see in the ash and oak trees here are Ramalina species but there also are many Usnea species. They are very intricate and have adaptations for getting nutrients out of the atmosphere or the air around them. There is a fourth type of lichen which is called Squamulose.  These lichens are crustose at the base with leaf-like squamules at the outer margins that often over-lap or form mats. I often see these on rocks, stumps, or soil. The little red soldiers that are common on dead tree stumps are a good example of this kind of lichen. Here in front of me, I see 5 or 6 different species of lichen growing on this fallen ash tree with an example of nearly all the different kinds!

Now that I have gone on about lichens I will only give you a short definition of what a moss is, and why it is different from a lichen. Mosses are one of my favorite organisms on the planet mainly because of their beautiful form and rich green colors but also because they are quite magical in their ability to dry up and become basically obscure in the summer and then with the smallest of rains they become vibrant extraordinary parts of our environment. When I look online for a definition of what exactly a moss is, I keep getting information on how to kill those nasty mosses on your roof and on the cement, so I will use the book, Gathering Moss by Robin Wall Kimmerer, to define them. Mosses are a tiny primitive land plant. A moss is a “bryophyte” that lacks flowers, seeds, and roots. They have no vascular system, no xylem, and phloem to conduct water internally. They do have leaf-like structures, root-like structures, and instead of seeds they have spores that act as seeds. There are 22,000 known species worldwide inhabiting virtually every ecosystem on the planet. They are commonly found in our area on tree bark, fence posts, rocks, in creeks and canyons and on the soil. When you look closely you can see many of the structures that make them the enchanting plants of fairy tales and elfin myths. The green colors are a wide variety from apple green to almost a black.

Take a moment to observe around you. Look up and down the nearest tree or cement wall, in the cracks of the sidewalk or even on a wall. You will see mosses and lichens, the dark green being mosses and the grey-green to almost white being lichens. Enjoy these ancient survivors of millions of years of changing environments and cultures.