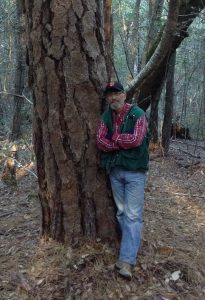 It is with heavy hearts that we share the news of Mendocino County’s legendary forester, Thomas E. Schott’s passing on July 4, 2020 at his home in Willits. We would like to take a moment to honor the legacy that our friend and colleague leaves behind.

Tom moved to Mendocino County, CA in 1974 and quickly made an impression. Tom worked as the lead for the Tomki Watershed Project – a landmark sediment control inventory, implementation, and monitoring project– under the employment of MCRCD. He later went on to be instrumental in the development and publication of the Mendocino County Soil Survey, naming, mapping and describing the county’s soils.  His pioneering work revealed previously unknown information about our forest’s soils and other foresters still consider his work a beacon for long-term planning. He spent the bulk of his long career working for NRCS as an area forester and District Conservationist. During that time, although no longer employed by MCRCD, he championed the organization. In fact, for many years, Tom Schott was the MCRCD, creating projects and writing grants.

He was well-versed in all phases of local conservation issues. His rich background and understanding of conservation challenges and his ability to explain complex issues clearly to landowners, politicians and upcoming scientists. He received awards from the EPA and USDA for his watershed restoration work and is well known and loved by landowners throughout Mendocino, Lake and Sonoma Counties. Current landowners still ask about Tom and rave about his knowledge and personal character.

A true conservationist to the core, Tom returned to work with MCRCD part-time after his retirement from NRCS. We have been truly fortunate to have had so many good years with Tom and so lucky that he – such a knowledgeable, trustworthy, and optimistic person – so firmly believed in the MCRCD mission. We will miss his laugh, knowledge, kindness, and energy, but ultimately, we are grateful for all that he has done for us, landowners and managers, and the field of forestry as a whole. We have lost a great conservationist as well as a great human being.

Tom is survived by his wife of 41 years, Shirley Schott, two sons, a granddaughter, a sister, a brother, aunts, numerous cousins, a niece and two nephews.