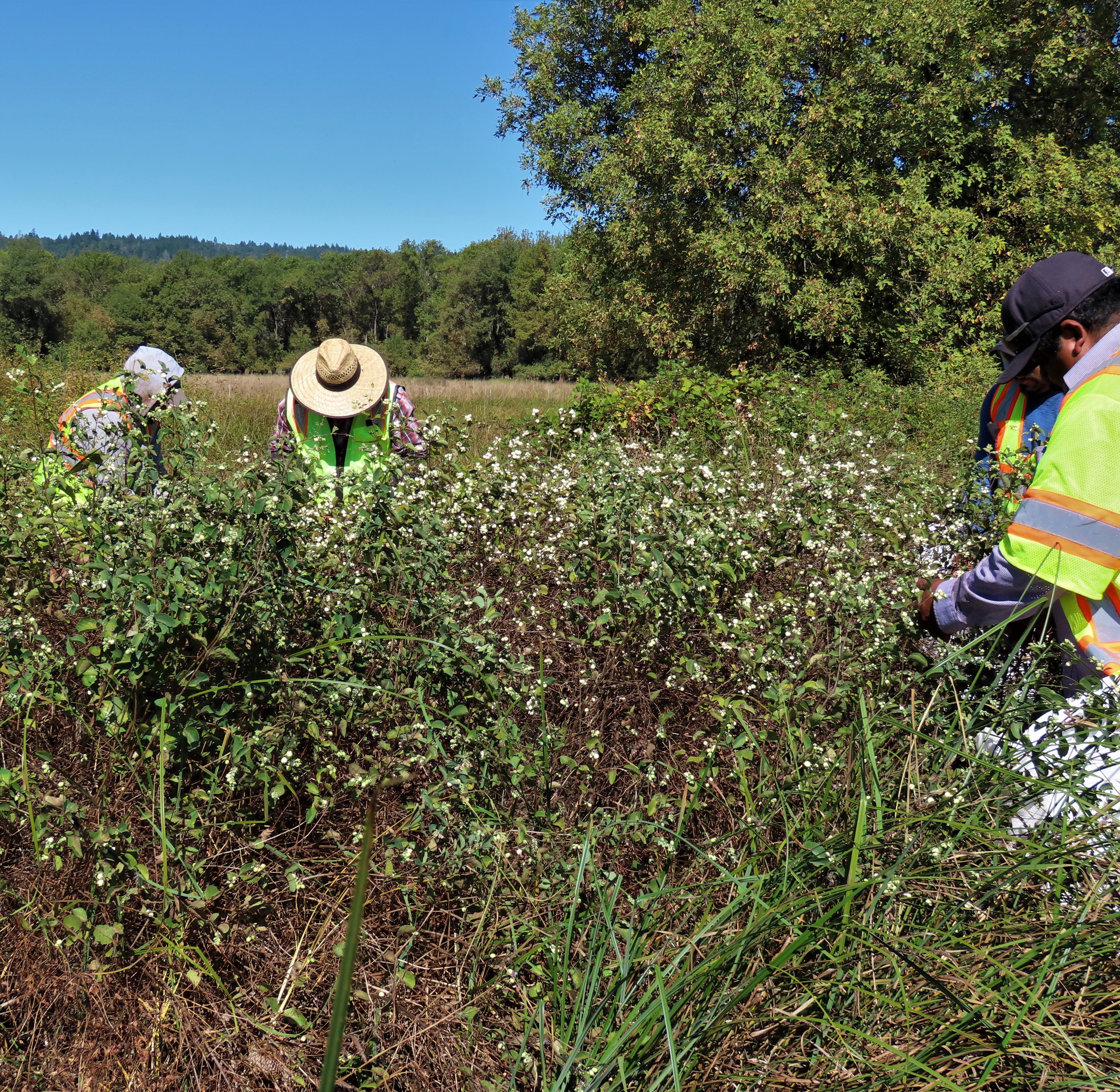 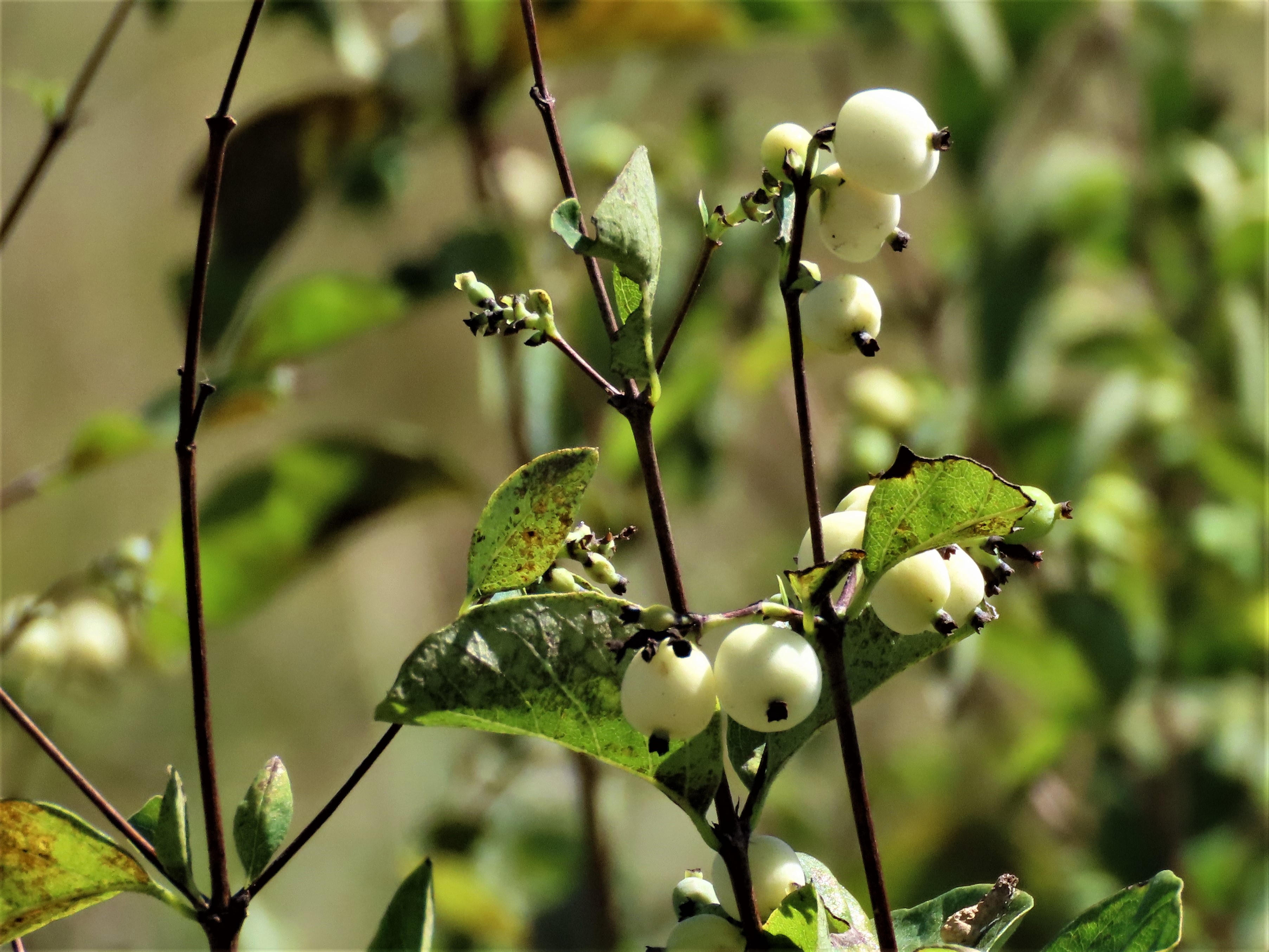 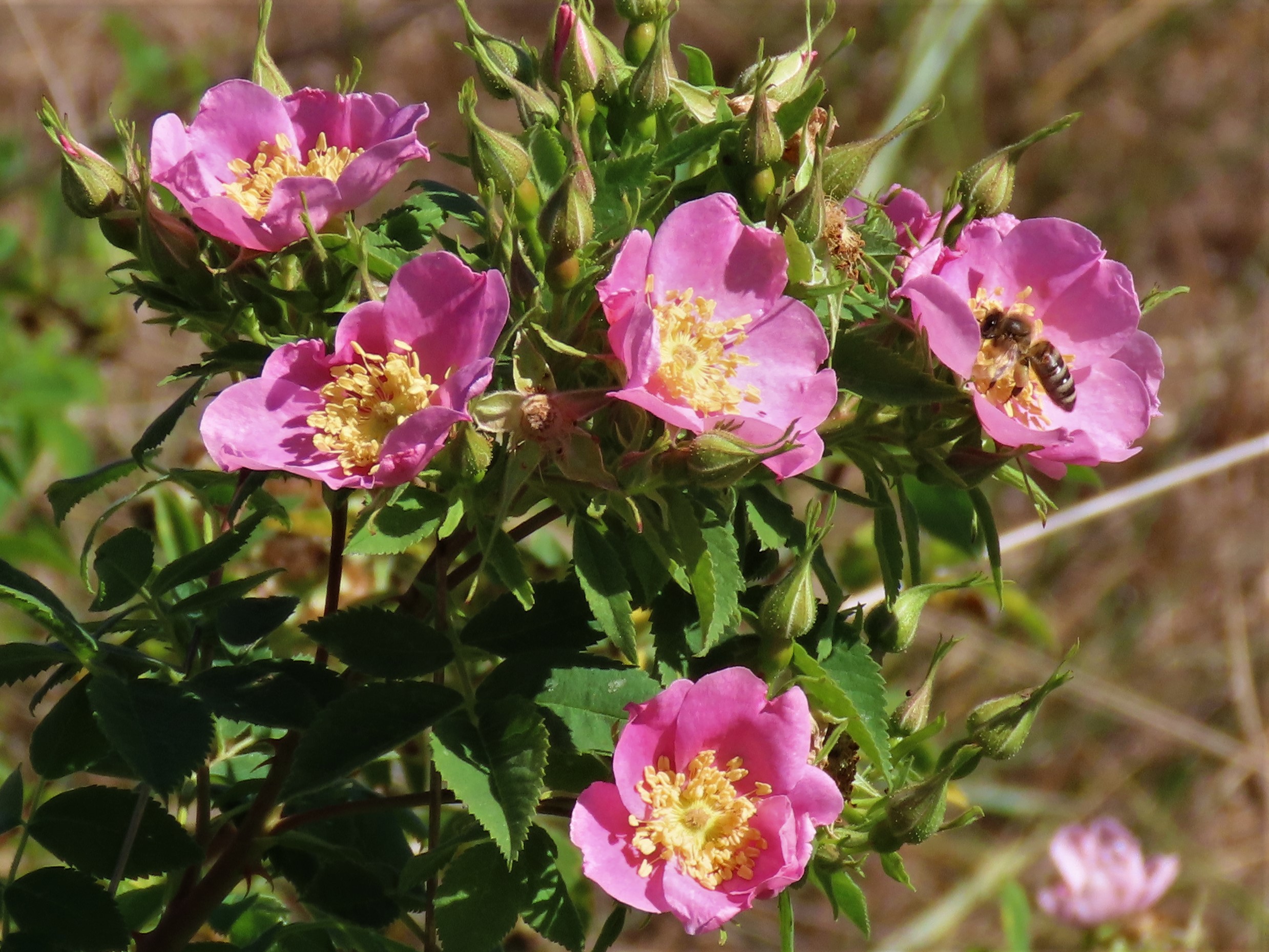 Walking out along Davis Creek, the scent of fall is in the air.  I admire the vegetation that is growing all around me, there are grasses of different shades of green, wild roses, some very tall mugwort, and a charming round bush with white berries.

This is the plant called Snowberry, Symphoricarpos albus. It is a plant I commonly see in the Willits Valley with all of its riparian habitat so I want to tell you some information about it.  This shrub grows 1 to 2 meters tall and has oval leaves that are opposite with smooth or wavy-toothed margins. When it flowers in mid-May to July, the flowers are small, pink to white bells in dense, few-flowered clusters. In the fall it is the white berries that make this plant stand out from others. The white berries are roundish and a dull white, have an unpleasant odor when crushed, and there seems to be a controversy about whether they are edible or not. This is what I have read about the berries: snowberries are high in saponins, which are poorly absorbed by the body. An infusion can be made out of the fruit and used for sore eyes, or as a shampoo for hair. Also, a decoction can be made out of the stems and roots and used for burns, rashes and sores.

Common snowberry is an important browse for deer and sometimes elk. The berries are an important food for grosbeaks, robins and thrushes. Bears also eat the fruit.The shrub provides good cover and nesting sites for gamebirds, rabbits, and other small animals.  Pocket gophers burrow underneath it. The pink flowers attract hummingbirds, but are mostly pollinated by bees.The leaves are eaten by the Sphinx Moth larvae.

This is a plant that I see in many habitats but especially under trees in the riparian corridors along creeks. It has an aggressive and hardy root system that allows it to spread and live in sometimes poor soils, which is one of the reasons why it is commonly used as a plant for restoration. It is very good at helping to stop erosion of soil. As part of the riparian restoration and enhancement along the creek in the Willits Valley mitigation area, snowberry has been planted wherever it is appropriate. The white berries are gathered for seed and propagated in a nursery before being returned the to this area. On this particular walk I happened to see the crew from Pacific Seed Company, who has been contracted by Caltrans for gathering snowberry and other plant seeds. It looked like a fun job! The other plant they were gathering the “hips”  from was the wild California rose, Rosa californica  This lovely rose is still blooming right alongside the Snowberry.

This time of the year Snowberry is easy to spot because of its white berries that always remind me that Autumn is nearly here.