Another Fall and Winter Bird Visitor 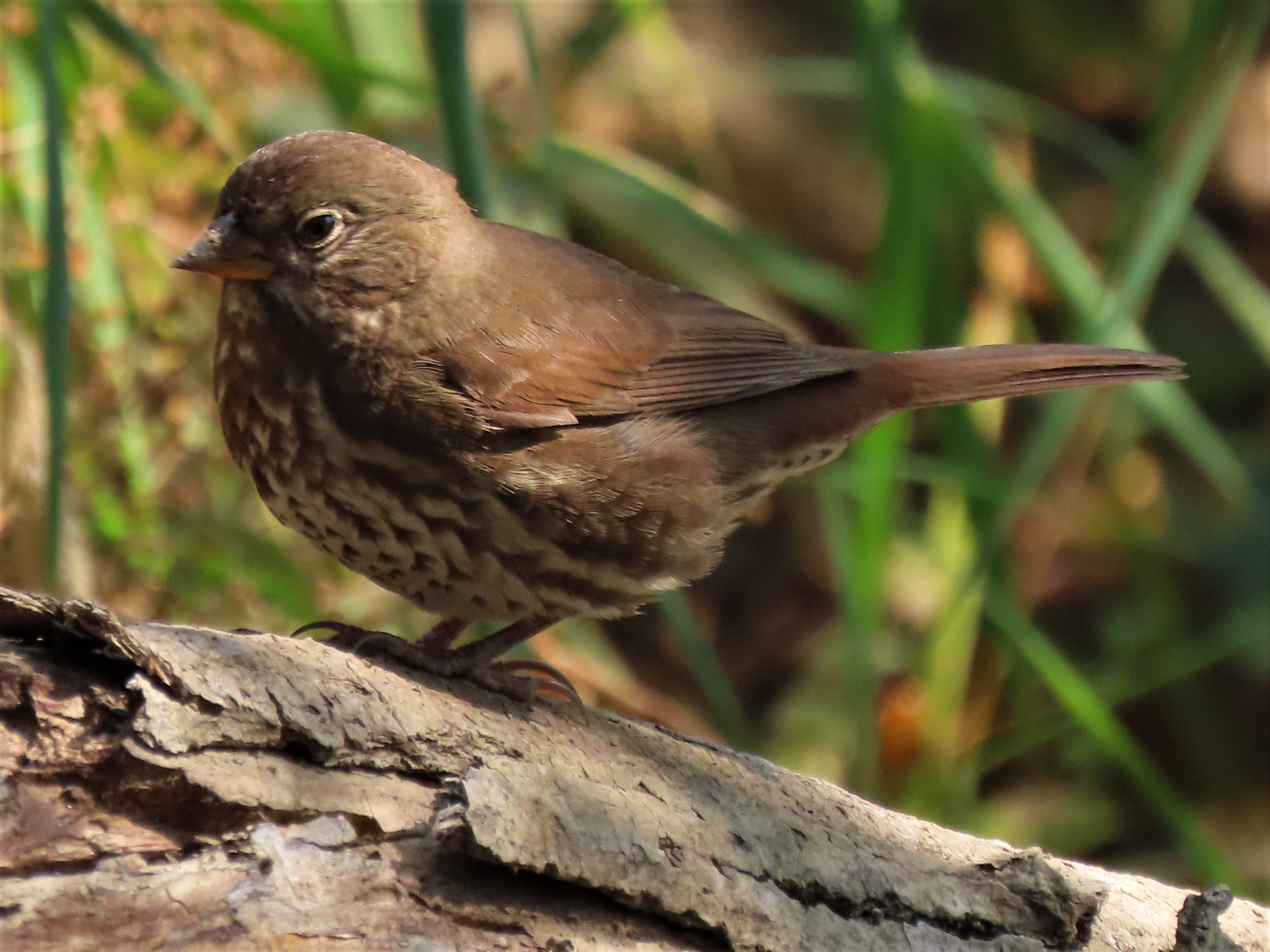 Fox sparrow showing its dark back and head 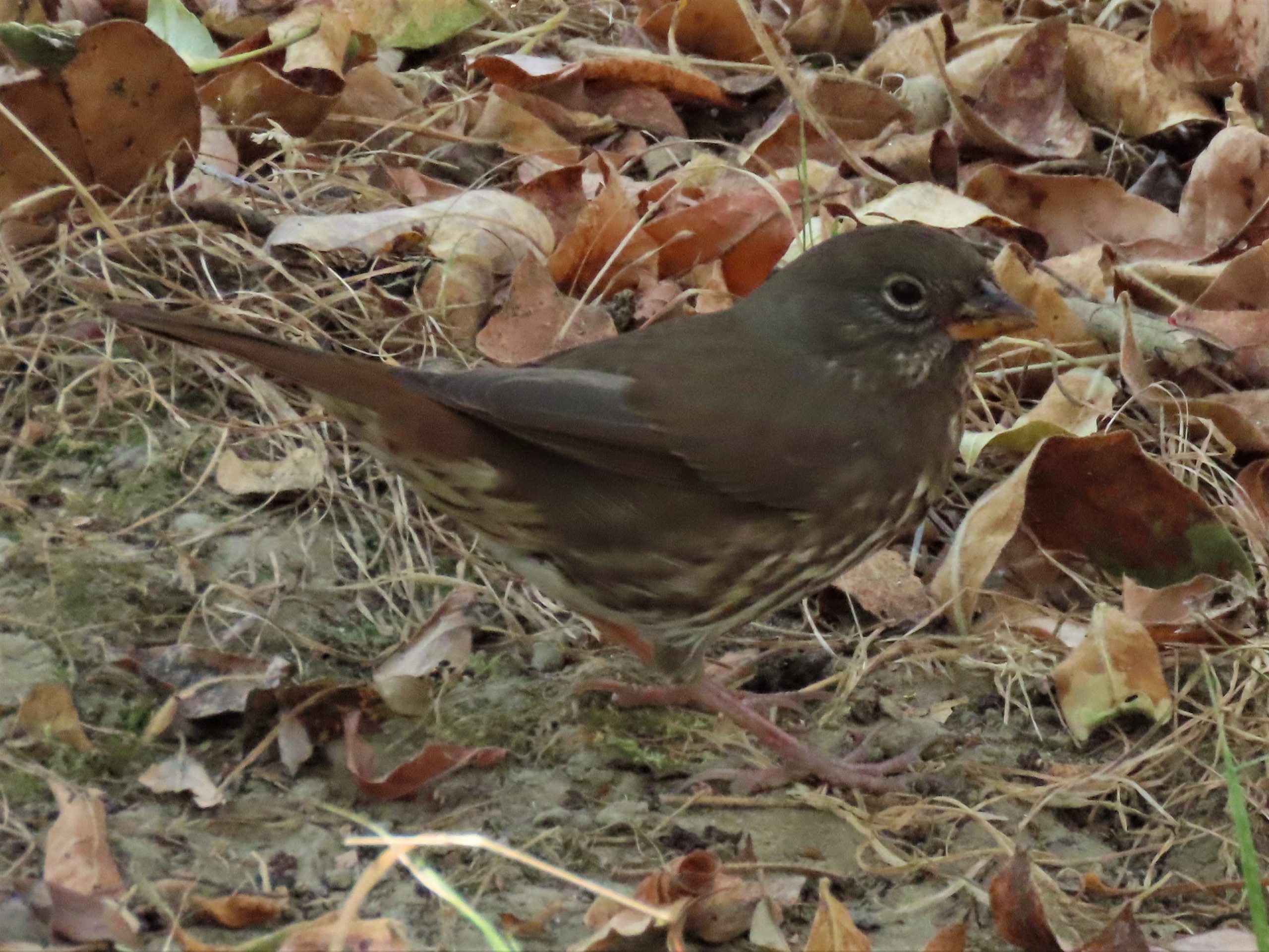 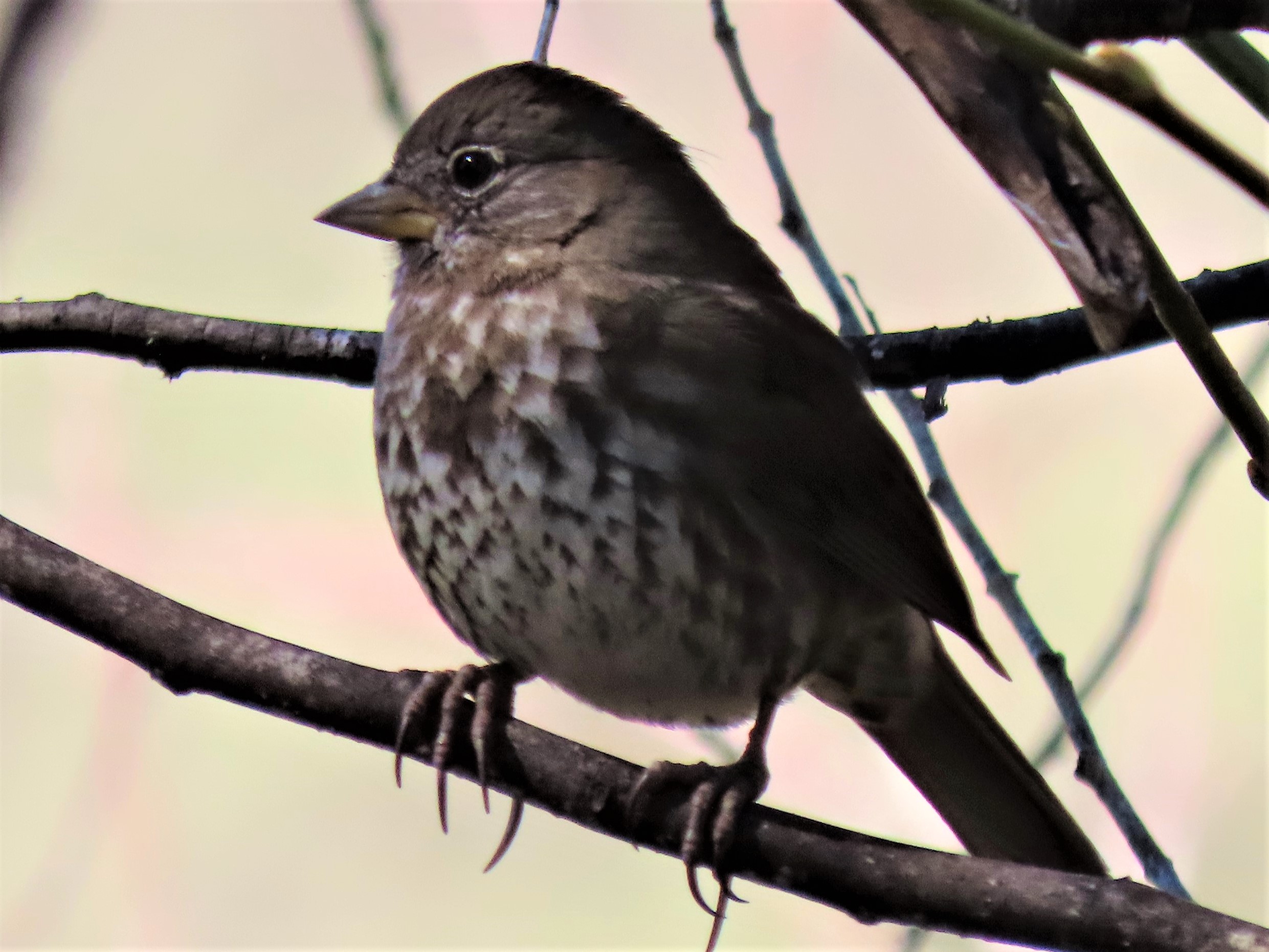 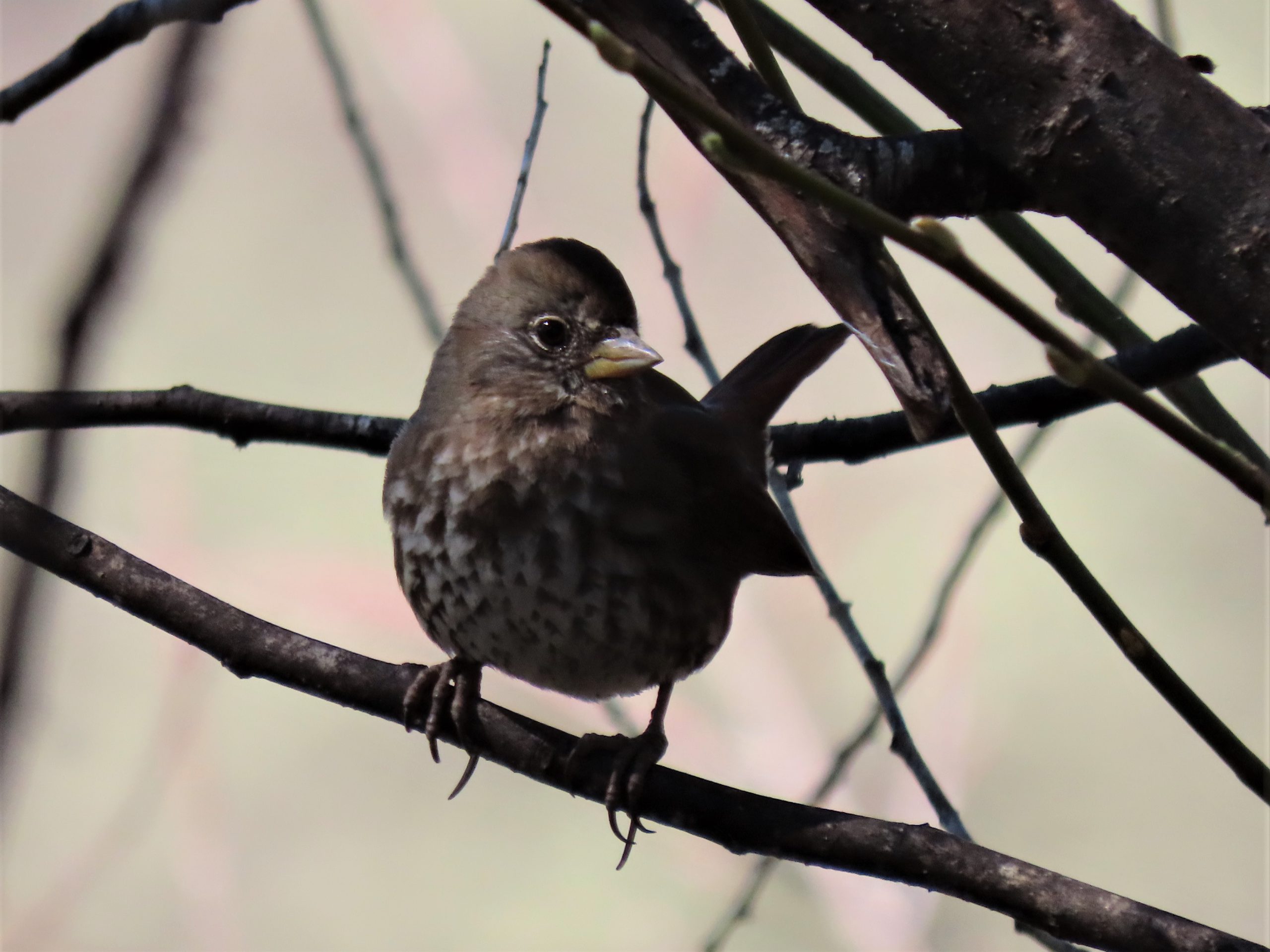 Notice the long claws on this sparrow 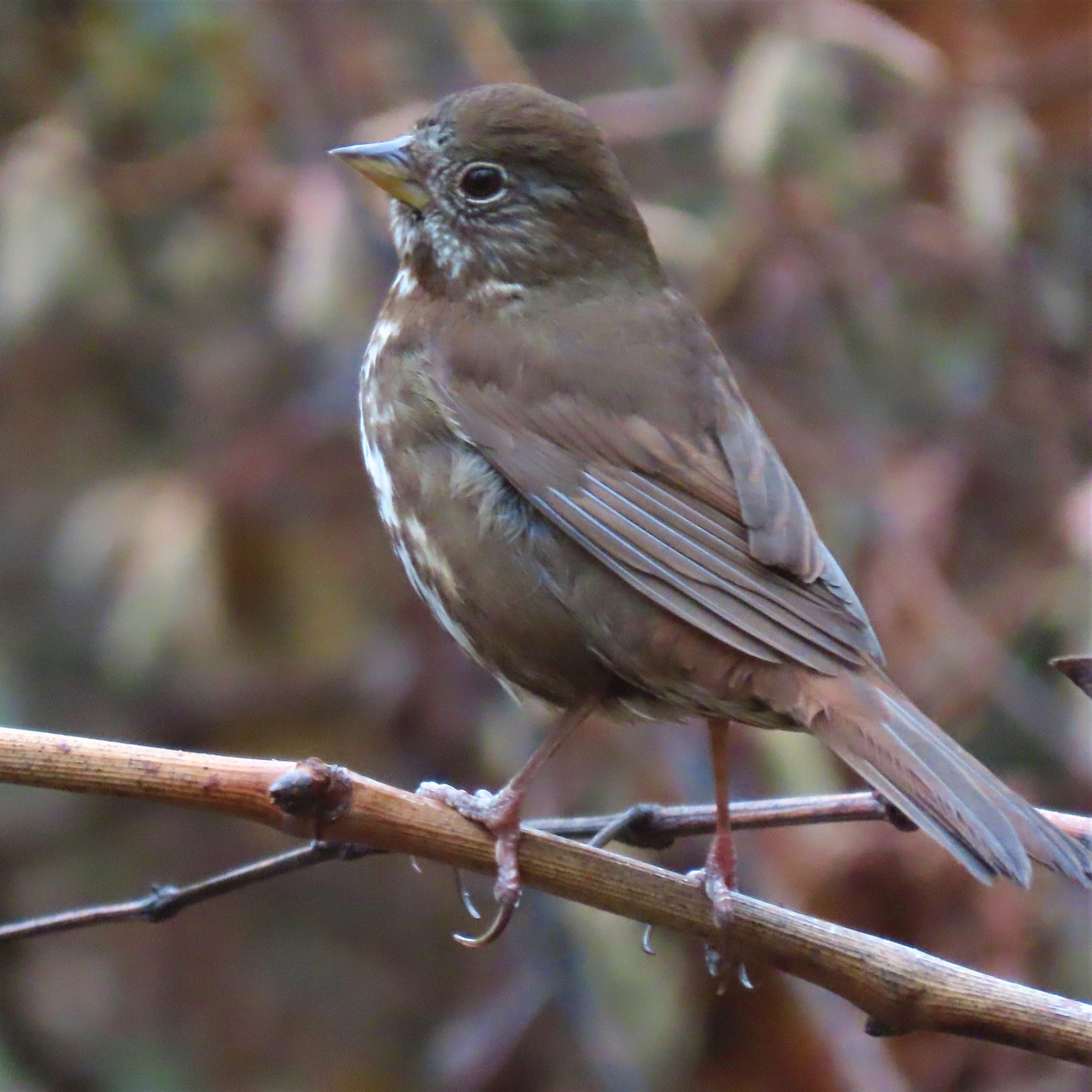 One of the birds that I look forward to seeing in the fall and winter months is the large chunky Fox sparrow, Passerella iliaca. This sparrow gets its name because of the bright glossy red color of the eastern and northern populations, but many of the Fox sparrows out west are predominantly gray or sooty brown with reddish wings and tail.

As I watch a Fox sparrow below some willow trees, I see it scratching vigorously in the dry leaves, jumping forward, and kicking back with both feet at once. This was something I read about in one of my favorite books by the author/naturalist/Ornithologist, Ralph Hoffman, Birds of the Pacific States. It was fun to see them do this regularly after reading that. This fine little bird guide was written in 1927 and is full of delightful information on the behavior and character of the birds around us. Look at the photo in this blog carefully of a Fox sparrow sitting on a branch and you will notice the long claws that allow these birds to dig so well!

There are four distinctly marked subspecies groups of Fox sparrows. In our area we mostly have the “sooty” subspecies, which has a dark brown head with dark brown spots and somewhat triangular-shaped markings on its chest. Its bill is gray and yellow and relatively short. These birds do not nest in the Willits Valley or along the coast, but rather they breed in the far north or high in our local mountains such as Sanhedrin or Snow Mountain. We do not get to hear their beautiful, sweet song here during the breeding season but if you take a trip up into the Mendocino National Forest in June or early July you may be lucky enough to hear one.

Fox sparrows are ground foragers. That is why they have those long nails on their claws. They leave a pattern of large flat circular holes as they are looking for seeds and insects. During the nesting season, they eat mostly insects which includes beetles, true bugs, flies, spiders, and millipedes. But during the winter when we have them around us, they are looking for seeds of weedy plants such as smartweed. At my home they are frequently seen under my bird feeders, but I have never seen them on the feeders.

As I watch this delightful sparrow it is joined by other species of sparrows and I see that its large, deep-bellied size and dark coloring sets it apart from the other sparrows. They are all busy looking for seeds and other food on the ground ahead of me. Its loud chip sound is another good identifying characteristic. Sparrows are not easy to identify and distinguish from one another which is why the Fox sparrow is a good one to focus on learning.