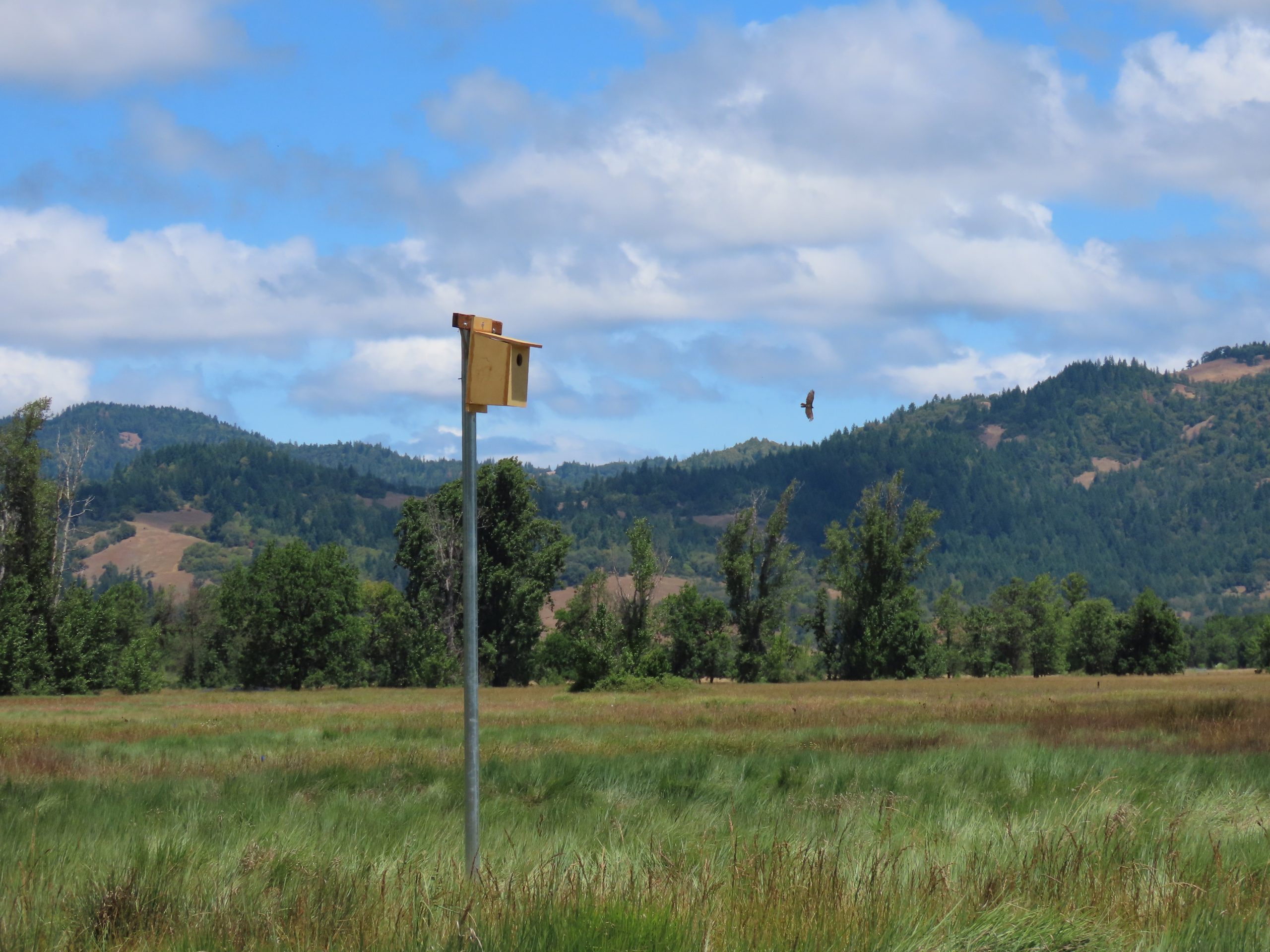 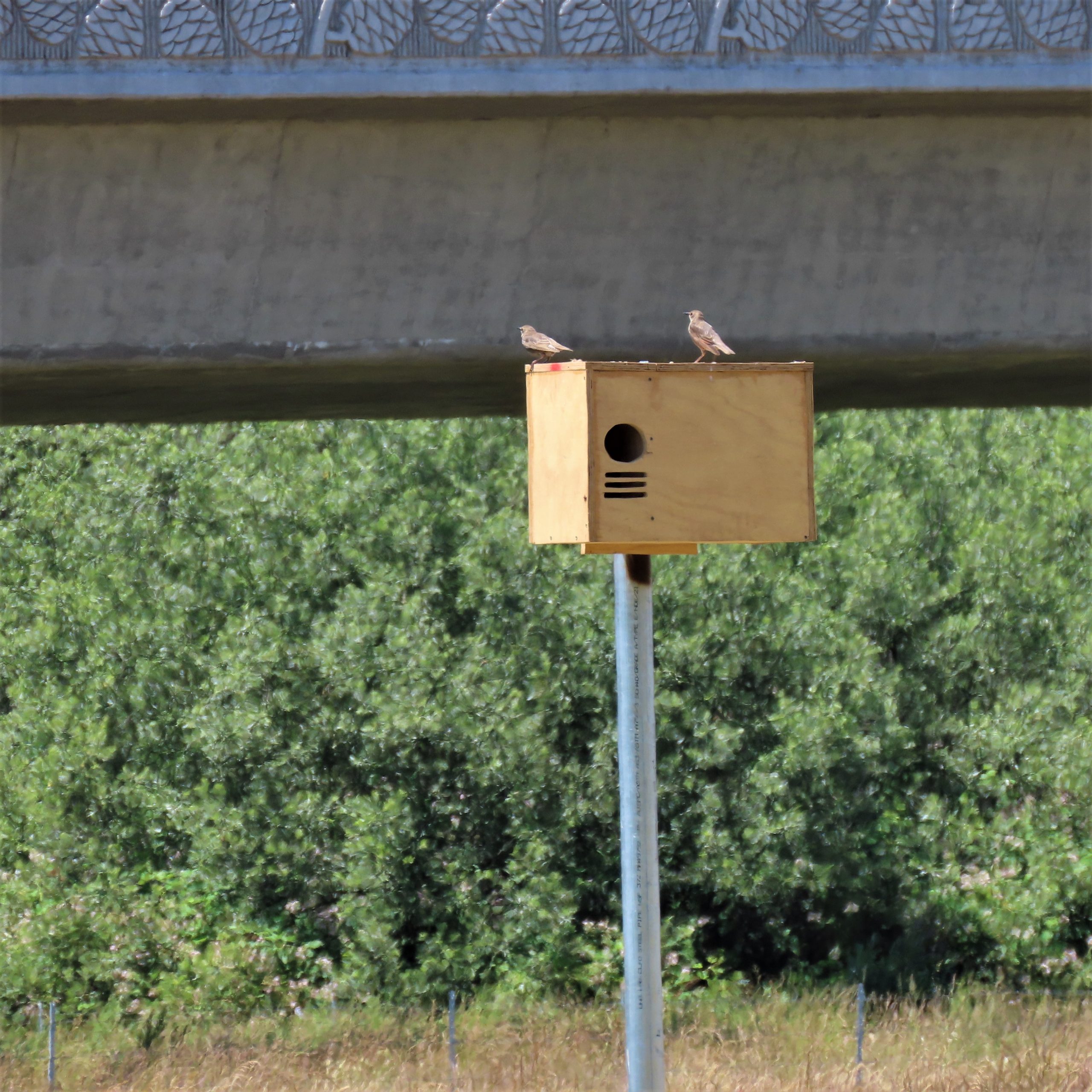 This is one of the Barn owl, Tyto alba,  nesting boxes on the east side of the bypass viaduct. Some European Starlings,  Sturnus vulgaris, were using it to rest on, when suddenly a Red Shouldered hawk, Butio lineatus, came and carried one away. 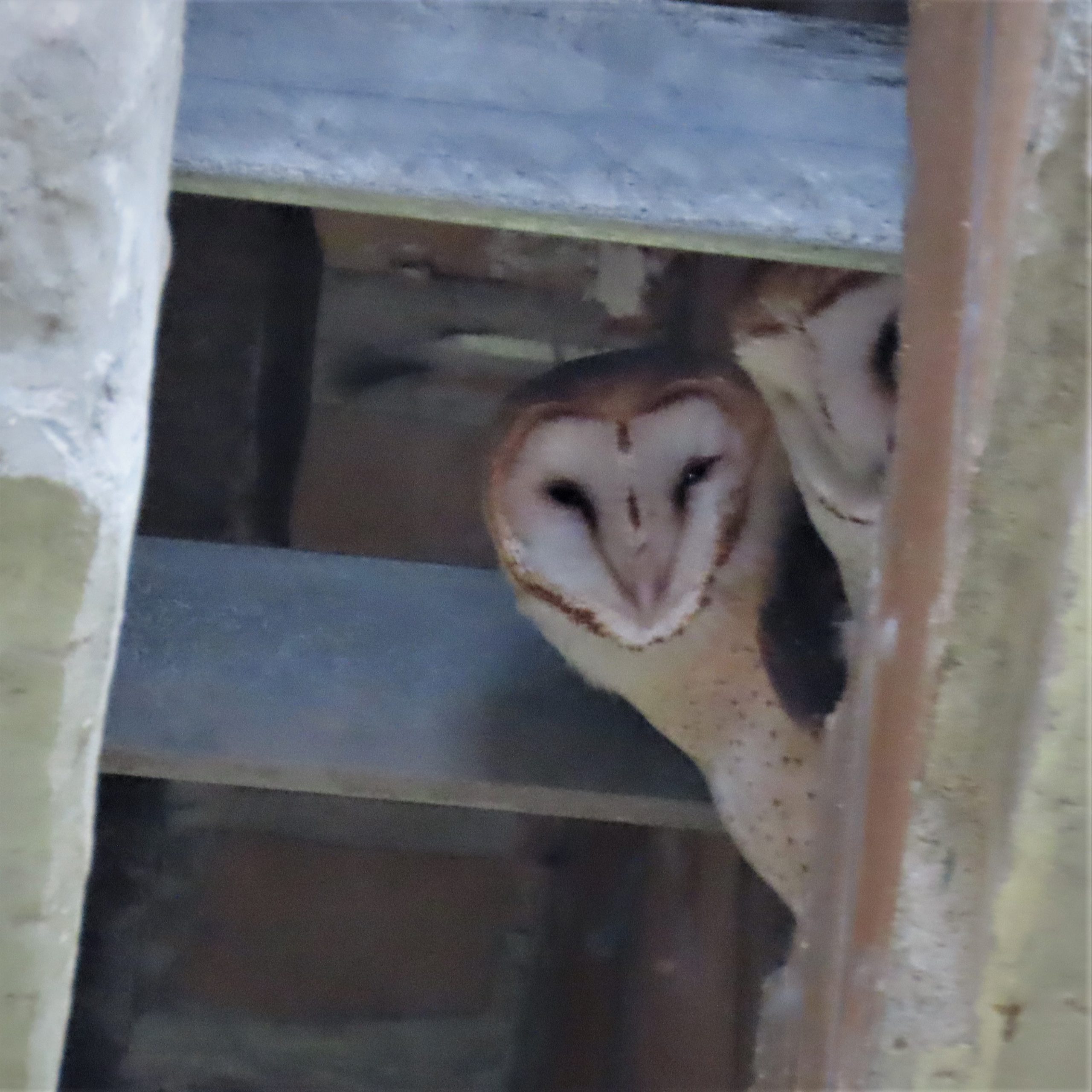 Another pair of Barn owls in a different flex-joint, their heart-shaped white faces easy to spot in their protected place. 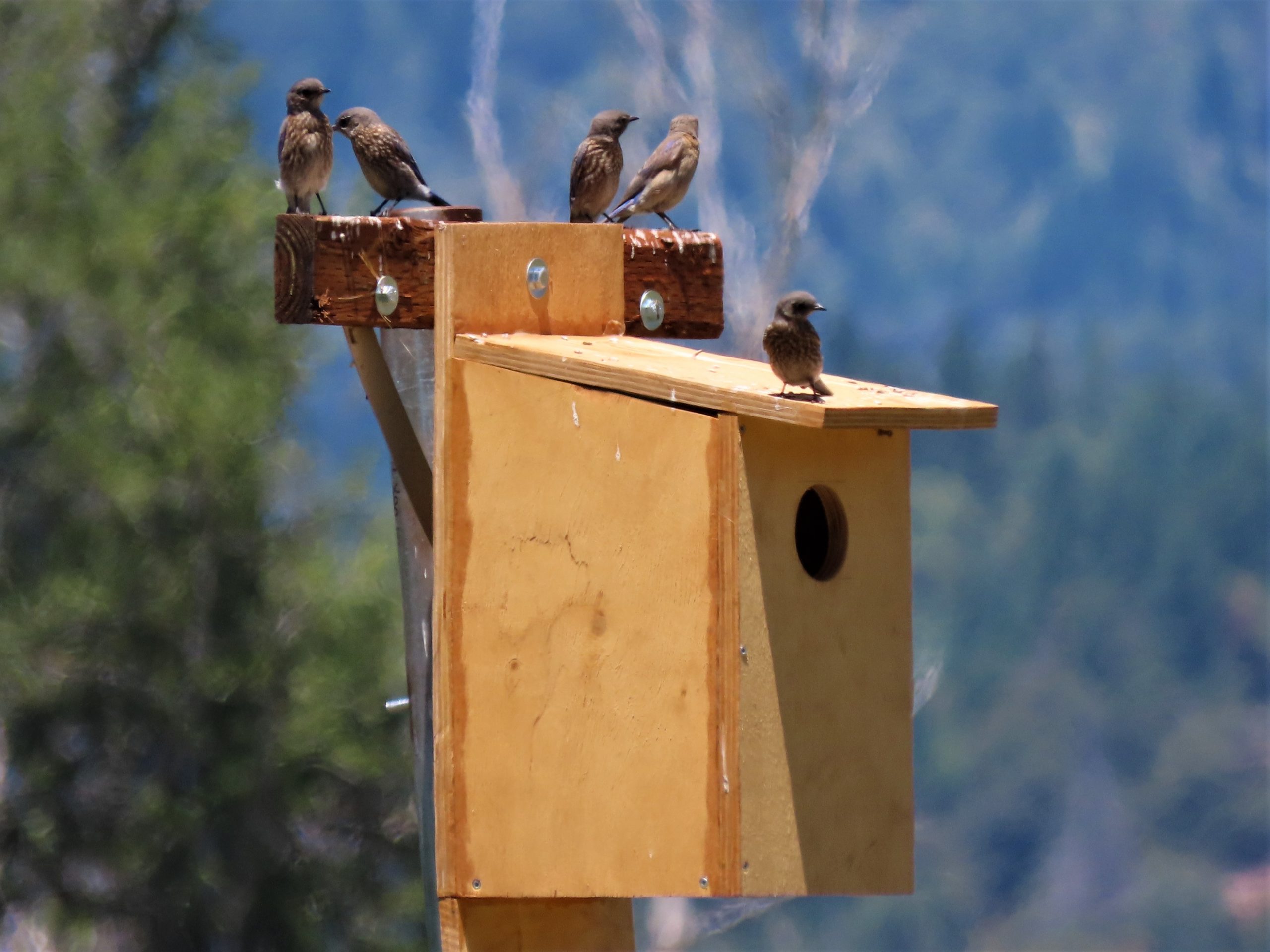 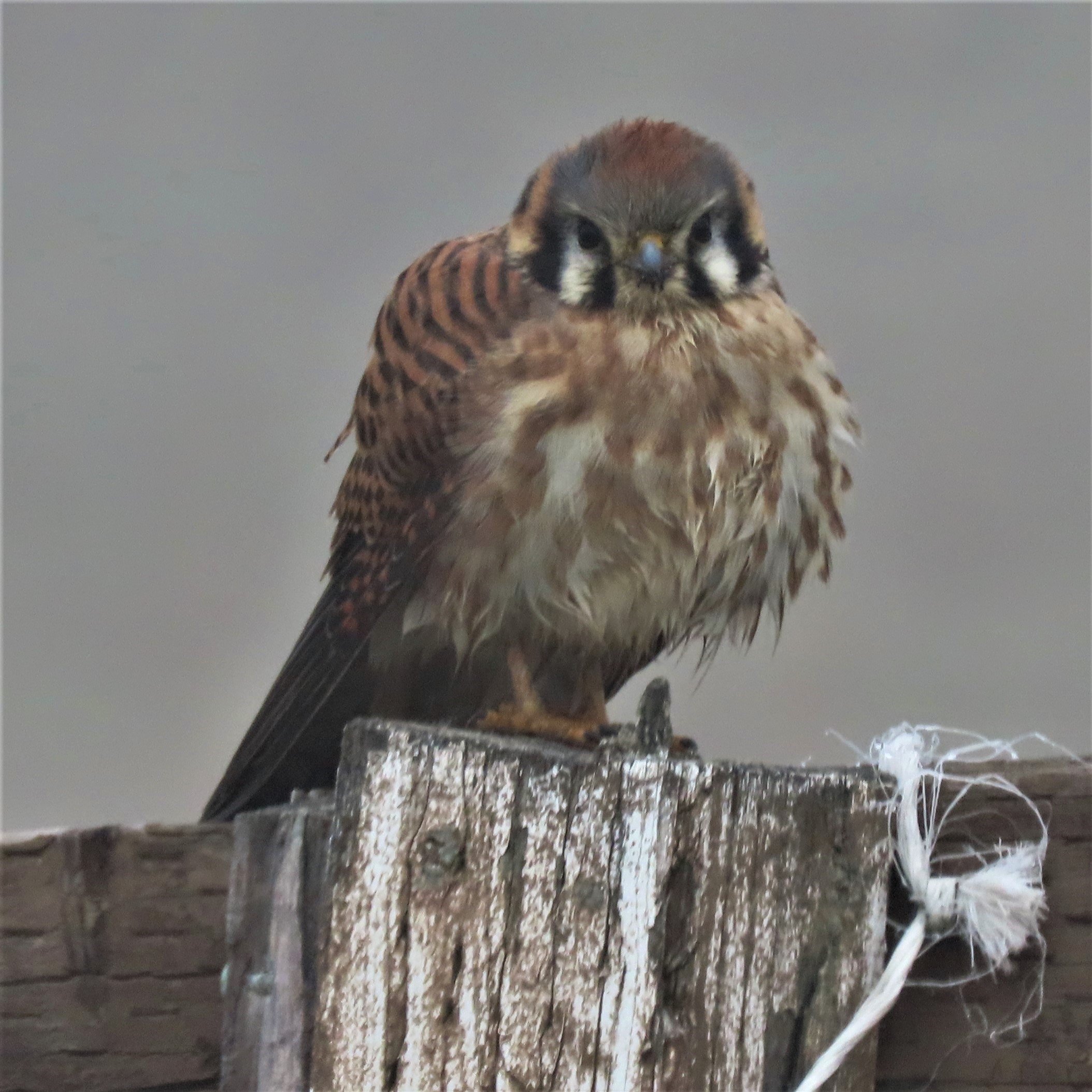 The American Kestrel, Falco sparverius, is the smallest falcon in North America. This young male got a little wet and looks very ruffled. 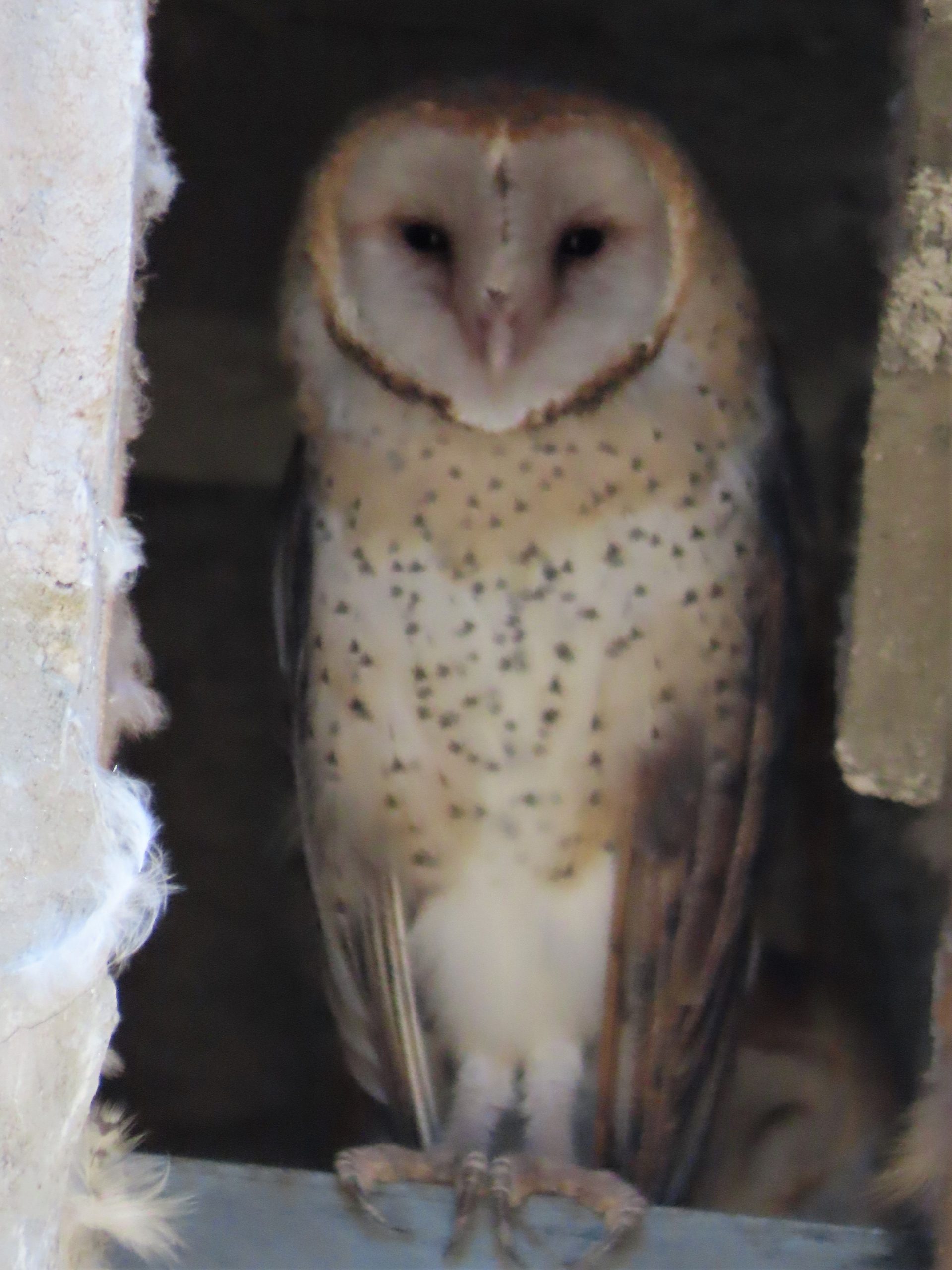 Two of the Barn owls peeking out from the flex-joint of the bypass viaduct. 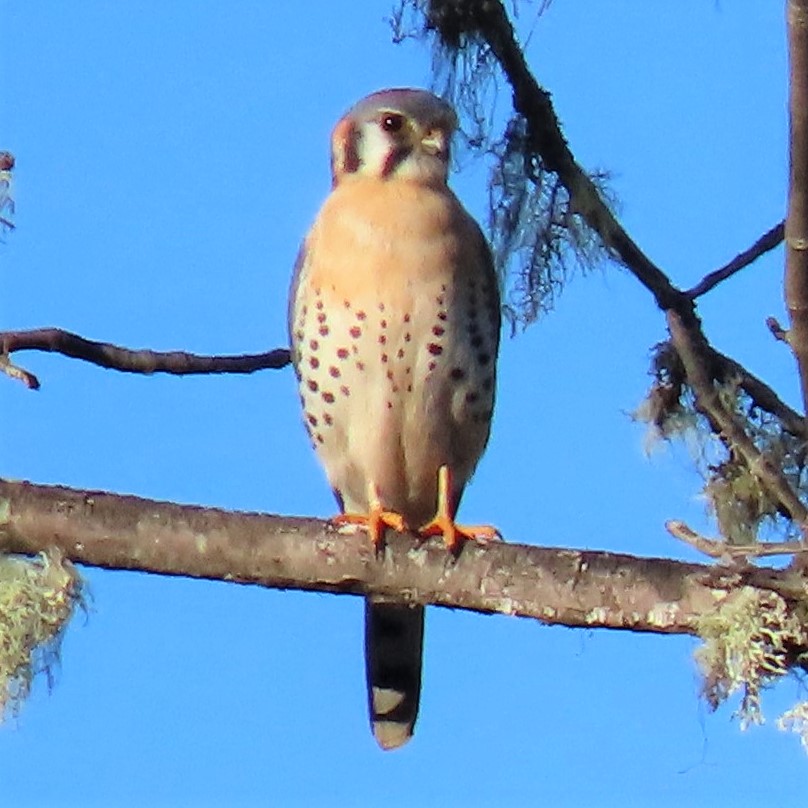 A male American Kestrel intently focused on the camera.

Summer has officially begun; the days are long and sometimes excruciatingly hot. Yet in Little Lake Valley, life goes on for all the creatures that make it their home. As the grasses dry out and the juvenile birds that were so carefully tended by their parents are now out and about, some of them are following their parents and making loud sounds to attract their attention but also the attention of predators that would like to eat them. It is a miracle that any make it at all with the ruckus they make. If you just stop and take some time to listen, you can hear many types of young birds communicating with their parents.

Today I want to write about an exciting project that was finished two weeks ago on the mitigation lands. Kestrel and Barn Owl boxes along with several tall perch platforms were installed to encourage more raptor presence on the project. The success of some of the native plants that have been established and carefully monitored since the construction of the bypass is threatened by take from the native rodents that also live in the area. The pocket gophers, meadow voles, mice, and squirrels have taken a toll on the plantings as they do in our own gardens. On the mitigation project, chemicals, rodenticides, and herbicides are not allowed in restoration work. The trapping or killing of native rodents is also not permissible. It was a problem that had to have a natural solution or a solution that worked with nature rather than against it.

After much research and collaboration with Caltrans Environmental biologists Emerald Remund and Maureen Doyle, we came up with a game plan. We needed to encourage the natural predators that were already living in the valley. Consulting the information put out by organizations such as the Peregrine Fund’s American Kestrel Partnership, Wild Farm Alliance, the Oregon State Extension Service, and the Cornell Lab, we decided to focus on encouraging and supporting the resident and migratory raptors that use the valley.

Raptors are a group of predatory birds including hawks, owls, eagles, and falcons. These birds often prey upon rodents. Raptors alone do not eliminate a rodent problem. But attracting raptors as part of an integrated pest management strategy can reduce the cost of conventional control methods. And it is a rewarding, environmentally friendly way to reduce rodent populations. Two of the most important birds of prey that control rodent populations on agricultural lands are barn owls and kestrels. Kestrels hunt by day, and barn owls hunt at night.

This was exciting for us to read because in Little Lake Valley on the mitigation lands these are two of our resident raptors. Both are cavity nesters and one of the ways to encourage them is to build nesting boxes for them.

The barn owl has been called the “cat with wings.” This beneficial bird preys on rodents, particularly gophers, mice, and voles. A family of barn owls eats about 3,000 gophers each year. An adult will catch and eat 10 to 12 gophers per night while brooding, between March and July. Barn owls are about the size of a small cat, but only weigh a pound. Their wings have soft fringe-edged feathers and a slow, silent flight that makes them especially efficient at catching unsuspecting rodents. We often see these beautiful owls as they are being chased by a mob of crows from tree to tree in the ash woodlands. Barn owls are often seen in the flex joints of the bypass viaduct where there is ample privacy and protection for nesting and roosting. They are not territorial and have sometimes been found to nest in colonies, which may explain why I have seen three adult owls sharing the viaduct areas.

The American Kestrel is the smallest falcon in North America. It feeds not only on rodents but also on small birds and insects. American Kestrel populations have declined continent-wide by 50% since 1960, so kestrels are a great choice to encourage on the property. The decline is still a mystery, but some research is showing that pesticides and rodenticides may be a factor. There are many fascinating facts about kestrels. Like many other diurnal raptors, they have the ability to see ultraviolet light which helps them track their prey as they hover in the air. There are also studies that have shown that the ability to see UV light helps them detect the urine small animals leave as they scurry along. Another interesting thing about kestrels is that when the young are ready to learn to hunt, they all hunt together as a family. So, a whole pack of kestrels can be seen together during this time! The young are ravenous and can eat twice as much food a day as an adult bird, about 2 to 3 voles per day.