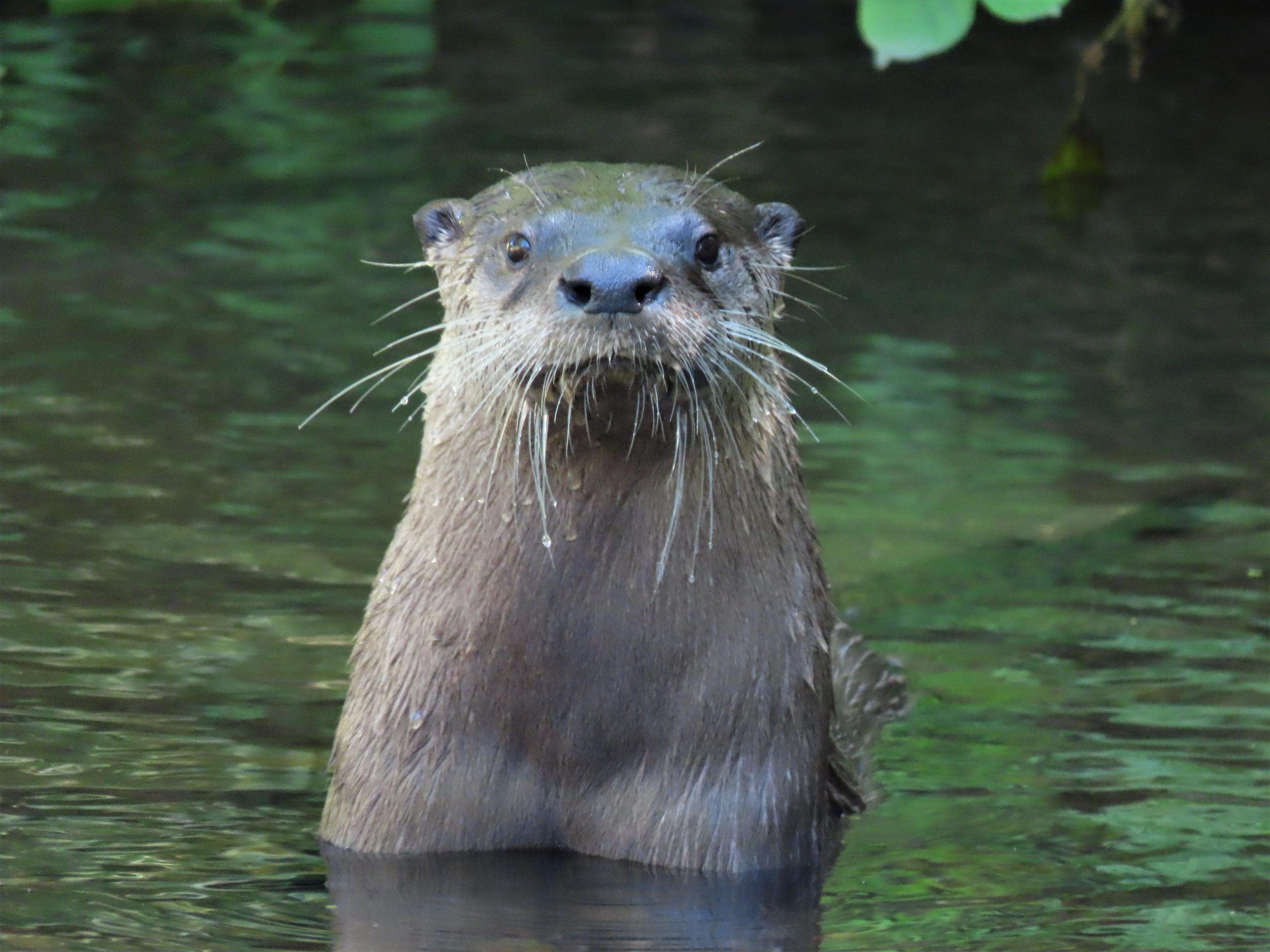 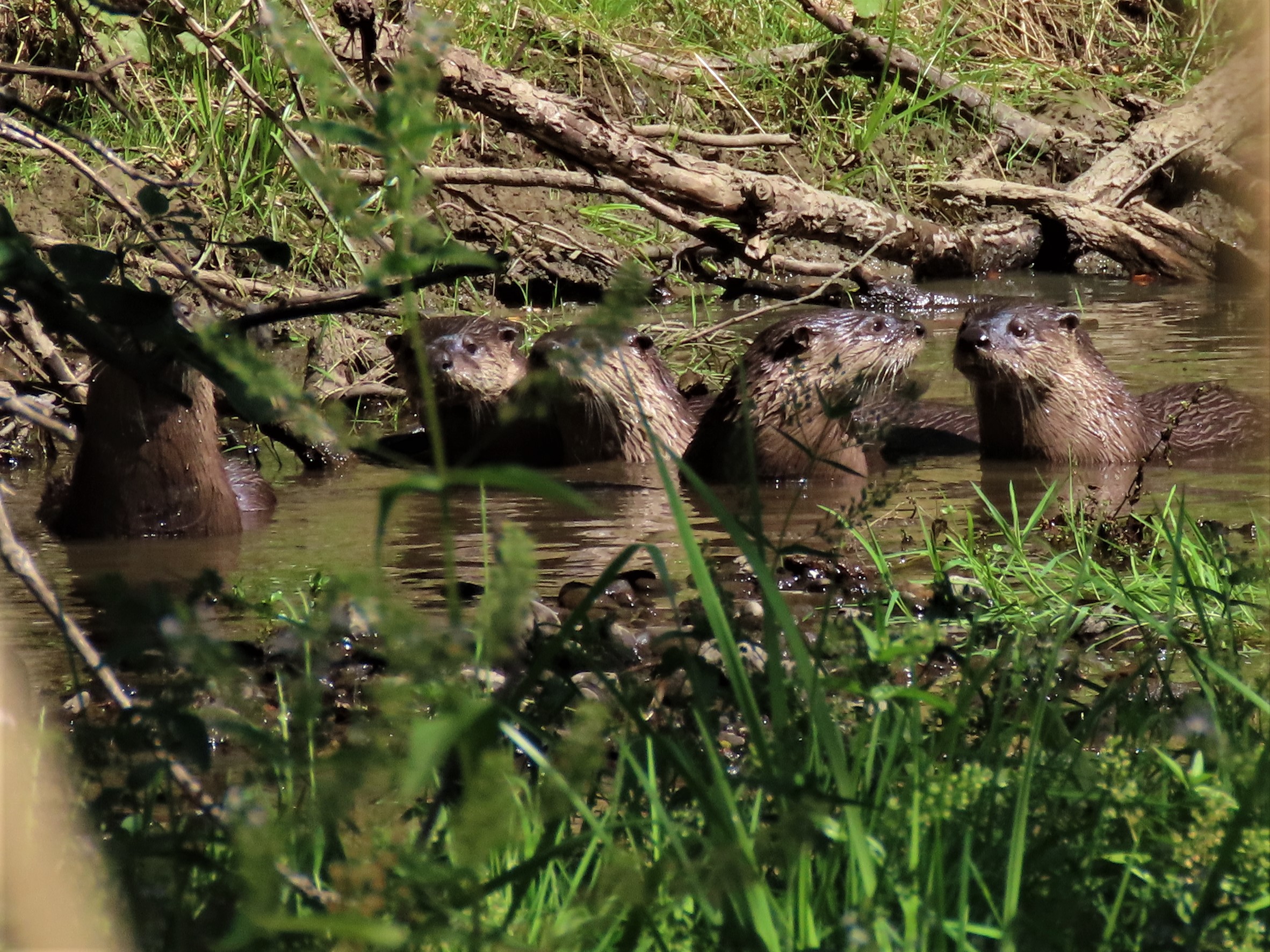 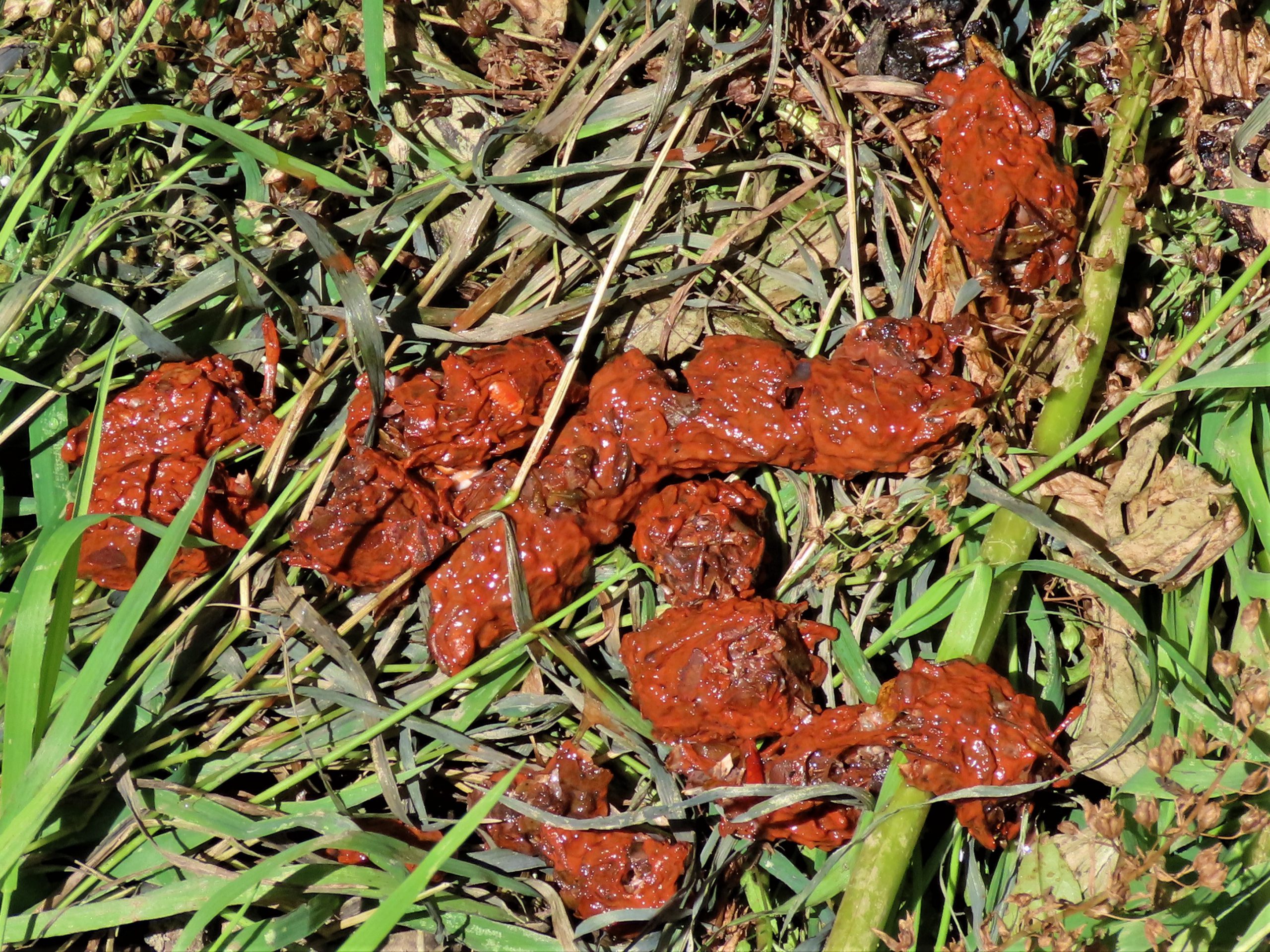 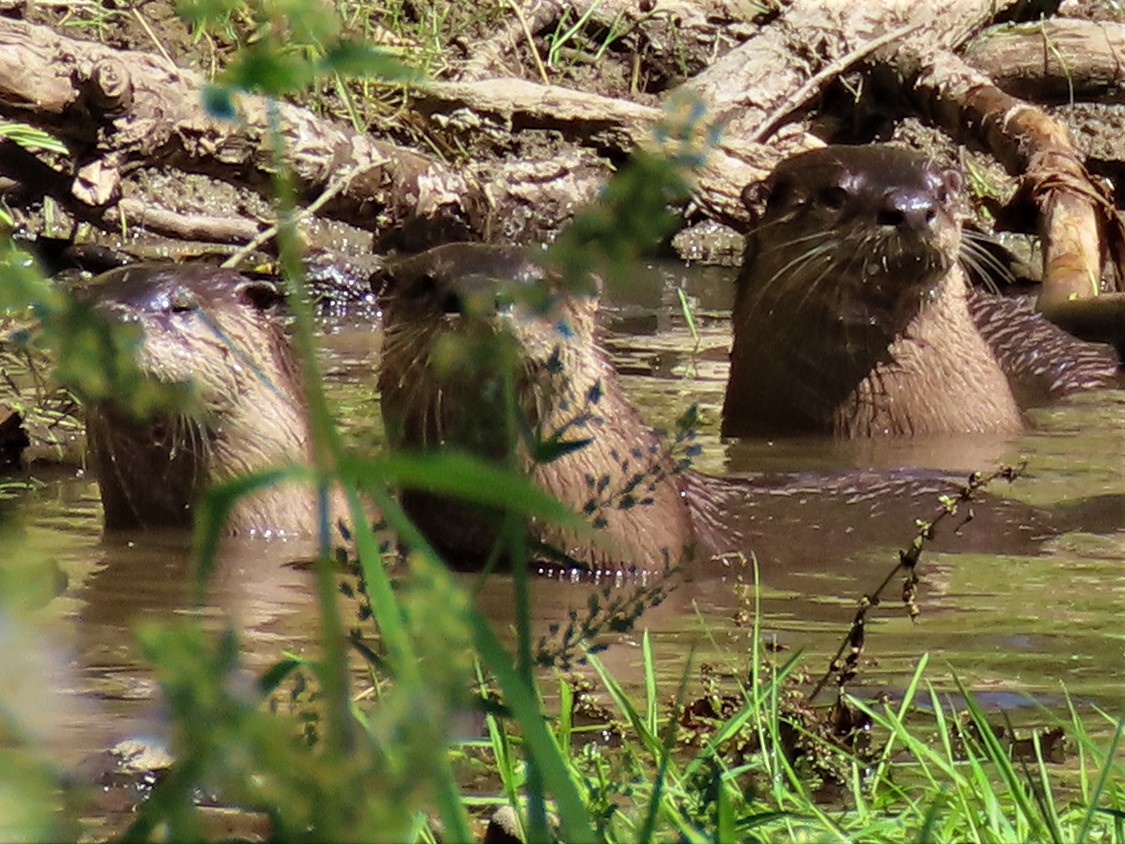 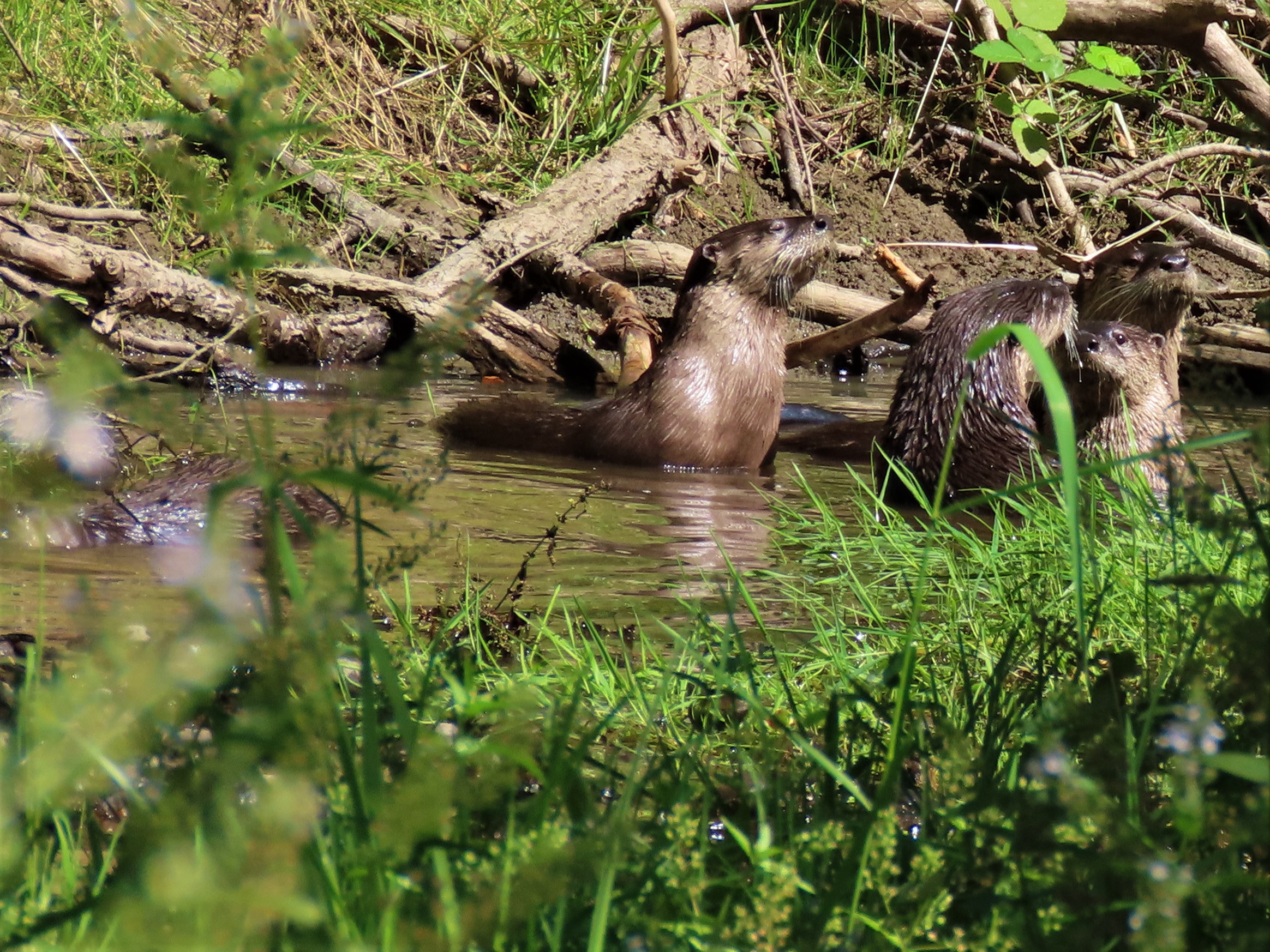 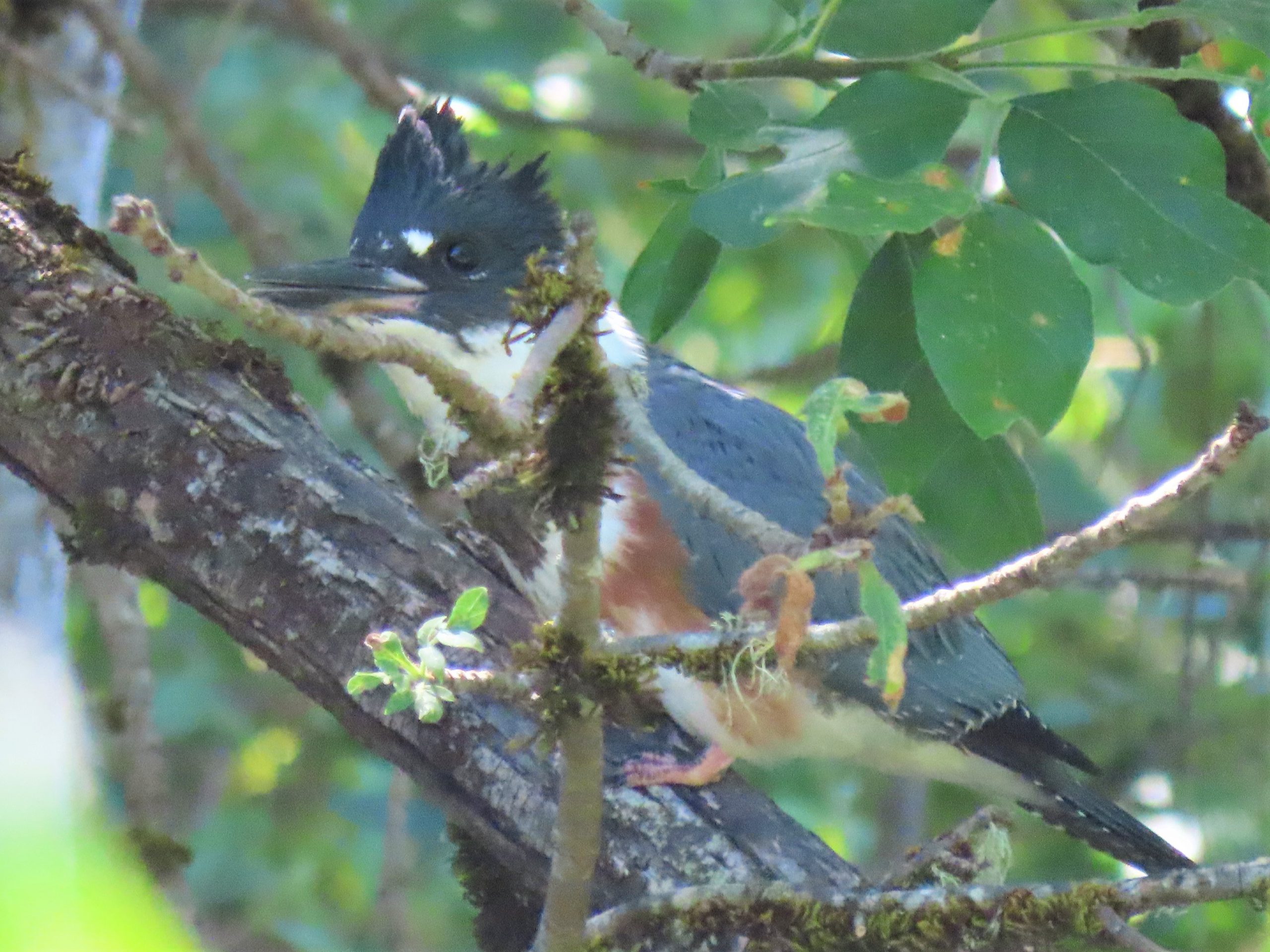 Along Outlet Creek at the north end of the Cox 80 parcel and north of the Willits Wastewater Treatment Plant, is a good place to observe the wildlife in the riparian area. The water in this section of the creek has been retained by beaver dam activity on both the south and north end of the property. As I made my way to the gravel bank of the creek, I could see that the beavers had been working on this dam at the north end, adding rocks, mud, and a few logs to strengthen it. The sound of birds filled the air as juvenile Black-headed grosbeaks, Bullocks orioles, Common yellowthroats, Yellow warblers, and a couple of Lazuli buntings came down to the water to bath and drink.

As I was trying to get some photos of all that was happening around me, I heard a loud ruckus coming from downstream of the beaver dam – splashing, crashing of brush, and even some guttural sounds I did not recognize. Suddenly, a juvenile wood duck came flying through my field of vision from the north side of the dam, through vegetation on the north end where the water is deeper. It swam off faster than a bullet! As I listened to the sounds getting closer, I got my camera ready to get a photo of whatever that creature or creatures was.

The first thing that I saw through my camera lens was a large river otter staring at me with open curiosity. It practically stood up in the shallow pool it was in to get a look at me, then retreated downstream. As I stood and followed with my camera, I was amazed to see that there was not only one river otter, but there were five of them! Three of them looked a little smaller and less perturbed about me. I watched as they began to tussle with each other, spinning and splashing in the stream channel. It was at that moment I realized my camera battery was low and my extra battery was in my backpack up on the trail. When I returned after hastily retreating to replace the battery, they had all slipped upstream to the deeper side of the dam.

While walking downstream to see what they had been up to, I found a large grassy area with lots of bright red and quite smelly otter scat. Looking closely, I could see they had been feasting on crayfish. Hence the bright red color! The condition of the grass showed me they had been rolling around the entire area.

Heading back upstream, I saw them a couple more times – sliding down banks, hiding under overhanging brush, and looking for food at the bottom of the creek. The water was turned a murky brown as they traveled up the creek.

As I turned to go, a Belted kingfisher flew right over my head and landed in an ash tree close to me. It too seemed fascinated with watching the antics of this gang of otters. It crossed my mind that this is a smart move on the part of this kingfisher since everything in the creek is stirred up, maybe allowing an easy meal of a fish or crayfish to appear. Probably best to do it carefully since these otters are skilled predators who will eat ducks or other birds if the opportunity presented itself! It was an eventful day on Outlet Creek in the Little Lake Valley.