A Hard Bird to Love 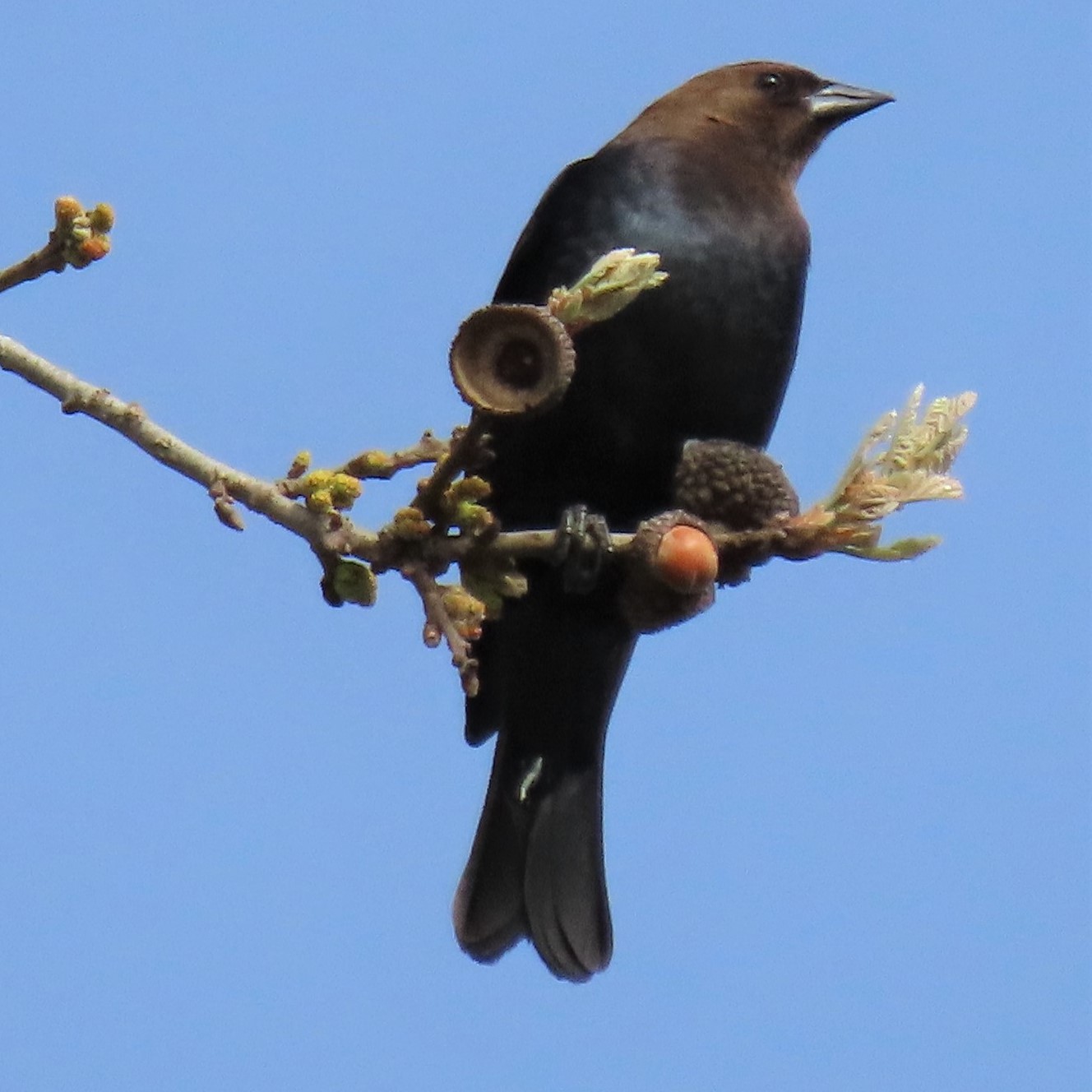 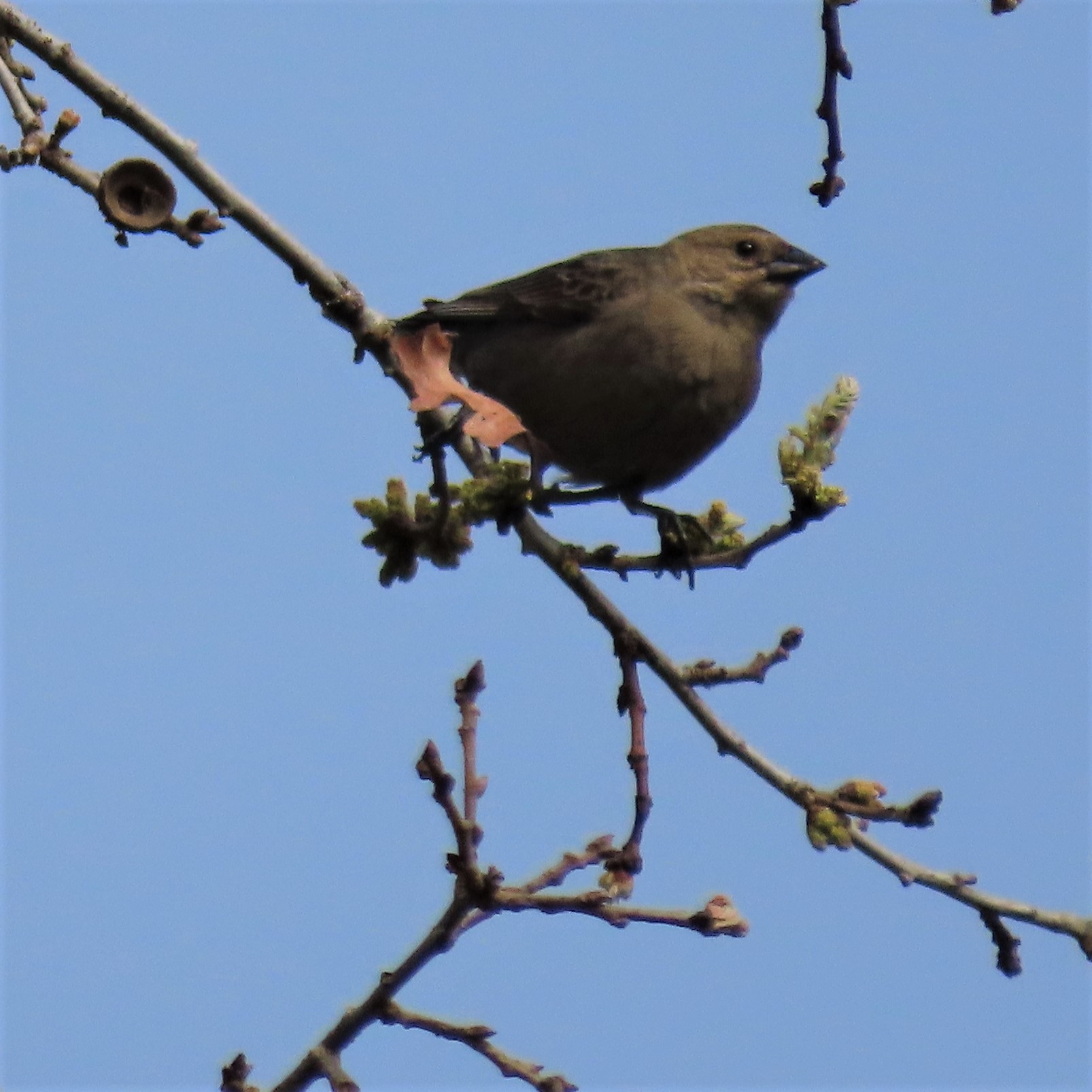 Female Brown-headed Cowbird, it does not have the distinctive brown head. 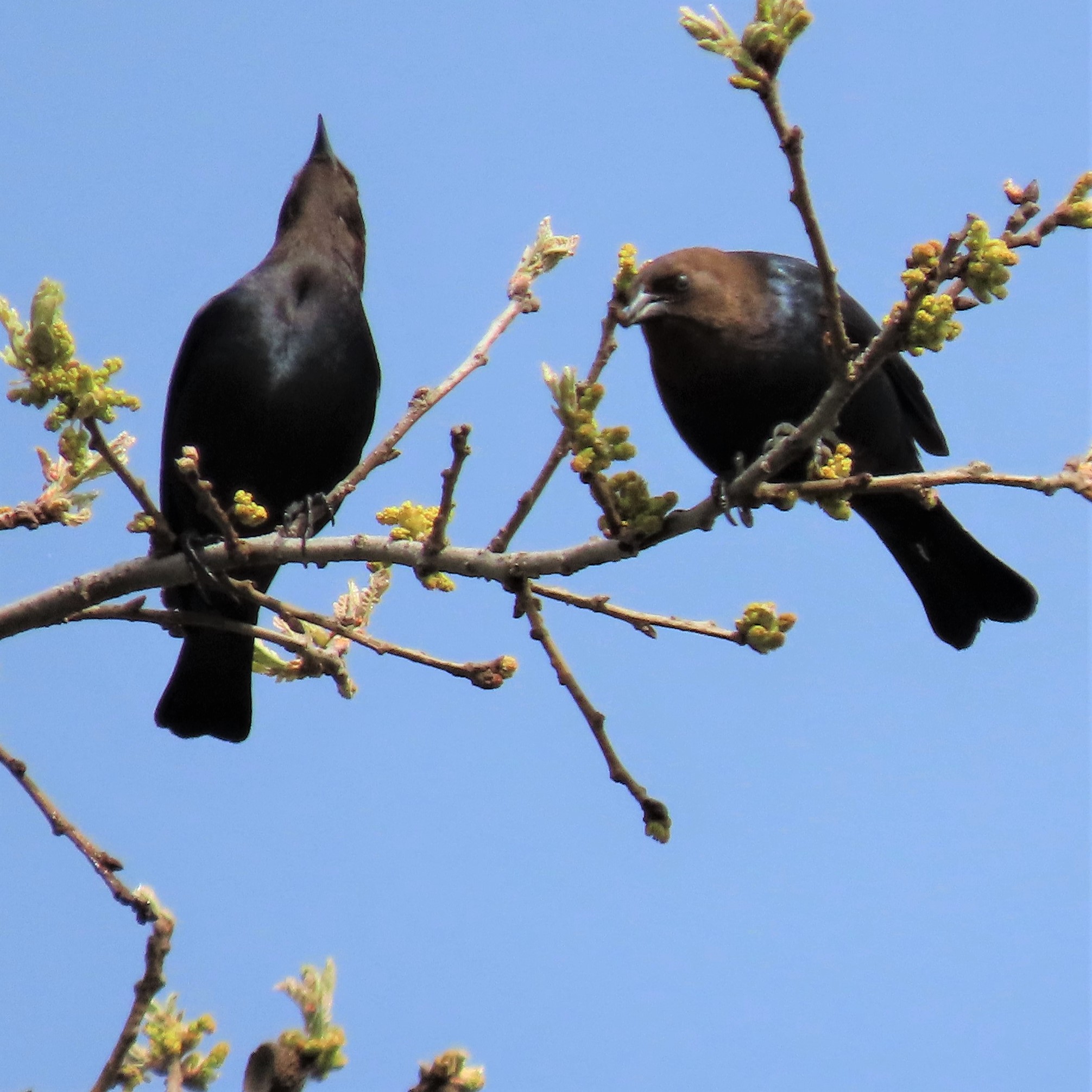 Three male cowbirds, one has his head pointed to the sky, a common sighting in the spring. 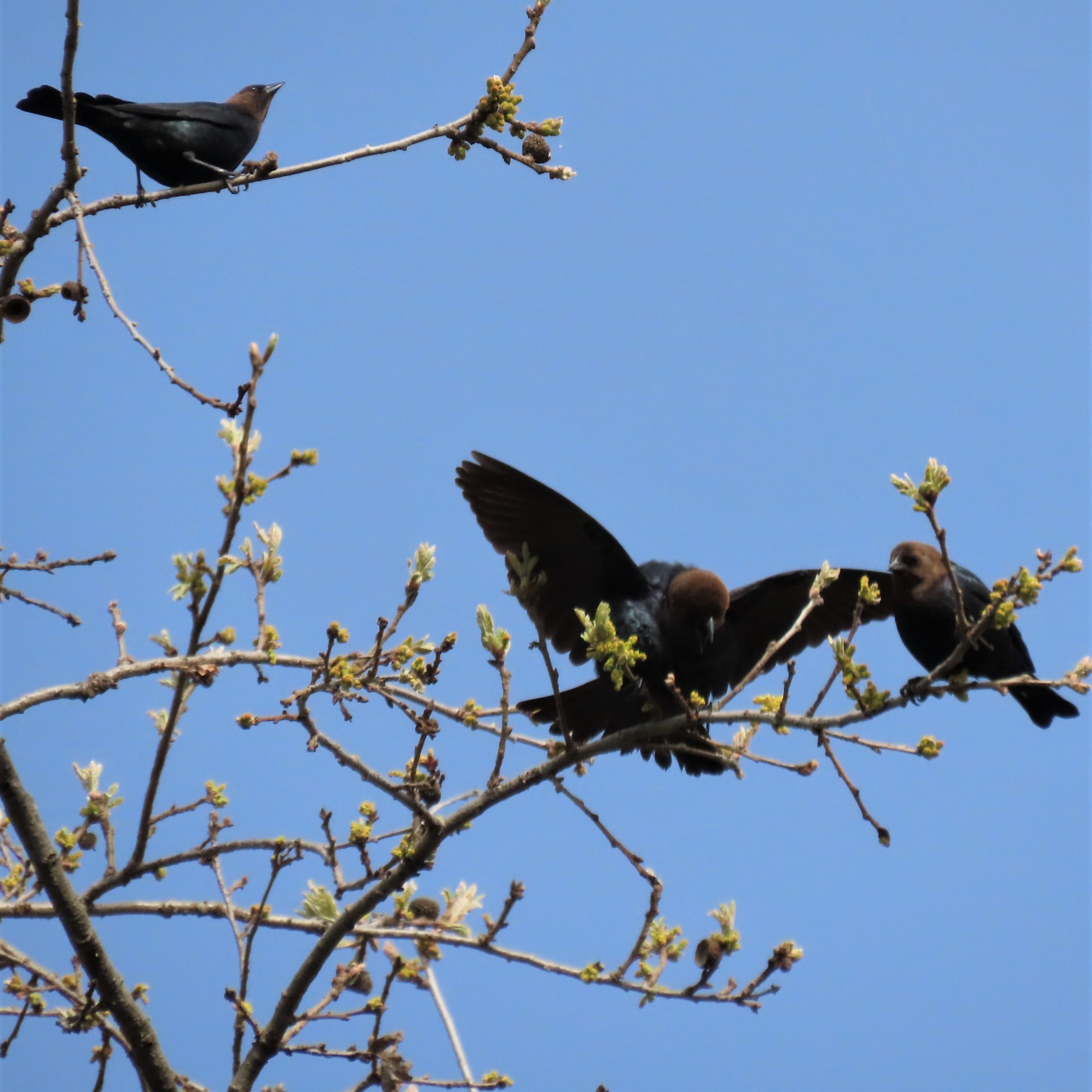 There is a lot of activity in the spring including a dance like motion with wings out and fluttering about.

It is a typical spring day, with big billowy clouds sometimes turning dark and mixing with bright blue skies. The bird world is exploding with song and courtship rituals as they find mates and seek out nest building material all around us. One of the very present and vocal birds that I actually find hard to love is the Brown-headed Cowbird, Molothrus ater. This bird belongs to the blackbird family but can be distinguished from the Brewers and Red-winged Blackbirds by its smaller size, shorter tail, and thicker head with a stubby conical shaped bill. The male cowbird’s head is a lovely dark chocolate brown color, hence its common name, Brown-headed Cowbird. Its back can have some green iridescence and a black body. The females are drabber and a grayish-brown overall. Today I have seen a good dozen of these birds, some hanging out in large groups of males with one female they are trying to impress. Their thin high note is easily distinguishable from other bird sounds and it is usually followed by a liquid burbling sound. It is a native of the Great Plains and now you must be wondering, what is it doing here? Is it one of our migrants?

The cowbird is a common year-round resident of coastal California and a summer visitor that breeds throughout all of California according to the California Fish and Wildlife Service. They prefer open habitats interspersed with shrubs and trees that provide forage material and host nests. I will talk more about the “host nest” situation later. So how did they end up here from the Great Plains? These birds followed the large buffalo herds and then other large grazing animals such as cows, flying behind as the herds moved and eating the insects they kicked up. That is how the cowbird received its namesake. This nomadic lifestyle impacted the way that cowbirds nest and raise their young, which is not at all!

Now we come to the reason I find it hard to like cowbirds: this species are brood parasites. This means they do not have a nest of their own, they lay their eggs in the nest of other birds. In fact, they have been known to lay their eggs in 220 different species of birds’ nests! When they do this, they usually throw one or more of the host nest eggs out and replace them with their own eggs for the unsuspecting host parent to raise. Because they do not have to expend energy raising their own young, the females can lay over 30 eggs in one breeding season! Many of these host birds are much smaller than the cowbird, such as the Yellow Warbler, Willow Flycatcher, and Bell’s Flycatcher, which all three are endangered species due in part to the parasitism of the cowbird. It is an enormous undertaking to feed and protect your own young, but if you are a tiny Yellow Warbler, raising two Brown-headed Cowbirds is an exhausting task. I have seen a Common Yellowthroat Warbler being pursued by a much larger gangly young cowbird making loud obnoxious chirring sounds which say, feed me, feed me! If the female cowbird did not throw out all the host eggs, those host babies have stiff competition for food and often do not make it to fledgling. I have yet to get a good photo of this heartbreaking behavior, but you can find plenty recorded on the internet.

Reading about them on the Cornell All about Birds website, they state that “Some birds, such as the Yellow Warbler, can recognize cowbird eggs but are too small to get the eggs out of their nests. Instead, they build a new nest over the top of the old one and hope cowbirds don’t come back. Some larger species puncture or grab cowbird eggs and throw them out of the nest. But the majority of hosts don’t recognize cowbird eggs at all.” One Yellow Warbler in Ontario built a nest 6 layers high covering up cowbird eggs. A local Peregrine Audubon board member and eBird recorder has recorded 19 species in our area that have been seen feeding cowbird juveniles or had cowbird eggs in their nests, including Lazuli Bunting, Orange-crowned Warbler, Wrentit, Pacific-slope Flycatcher, Spotted Towhee, and Dark-eyed Junco!

Watching Brown-headed cowbirds perform their antics of pointing to the sky and then spreading their wings and doing a sort of dance as many blackbirds do, it is hard not to appreciate their artistry and yes, even their beauty. I can even come to appreciate the thousands of years of evolution and adaptation that it took to develop such a ‘clever’ breeding strategy that neatly fits their nomadic lifestyle.